How alcohol consumption might contribute to viral liver infections?

The coexistence between excessive alcohol consumption and hepatitis C virus (HCV) infection is causative of a high death ratio annually. It is well-known that phosphoinositides (PI) not only regulate a number of physiological processes but also they are key tools for HCV replication in liver cells but it is still required to know whether alcohol consumption facilitates PI availability for HCV infection. 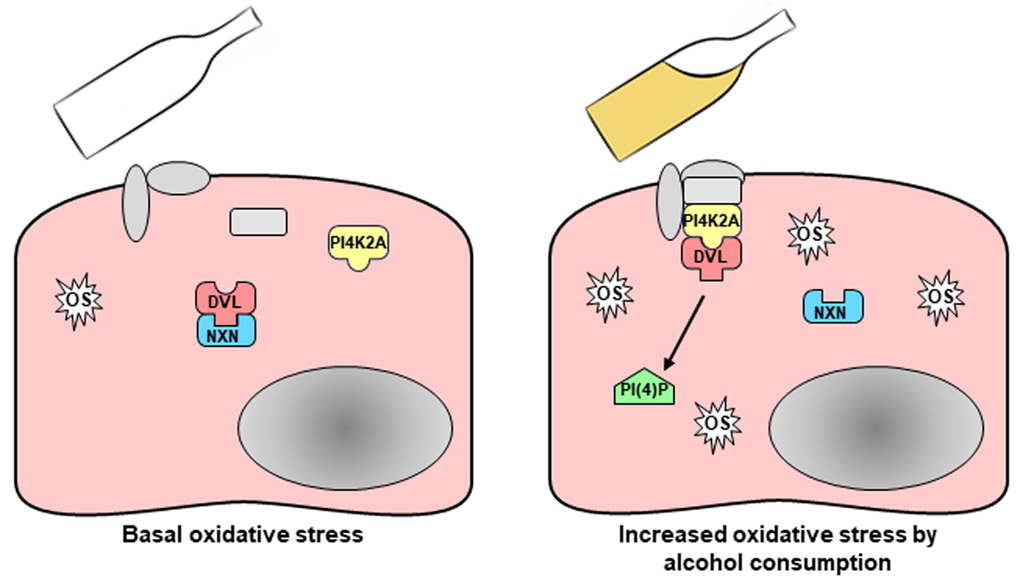 PI play key regulatory roles in cell physiology including signal transduction, regulation of membrane trafficking, migration, among others physiological mechanisms. A number of infectious agents, including HCV, alter PI-dependent regulatory systems of host cells for their intracellular movements, replication, and assembly. For example, the endocytosis of several pathogens uses the same routes by which cell surface proteins enter the endocytic pathways and hence rely upon phosphatidylinositol 4,5-bisphosphate [PI(4,5)P2]. Additionally, the HCV requires phosphatidylinositol 4-phosphate [PI(4)P], specifically made by phosphatidylinositol 4-kinase alpha (PI4KA), for its replication. This information shows that PI play a central role in viral liver infection; however, whether alcohol consumption modifies the ratio of PI, which could favor HCV infection, it had not been explored.

Nucleoredoxin (NXN), a stress oxidative sensor enzyme, interacts with different molecules to regulate several physiological processes. NXN interacts with Dishevelled (DVL) to regulate cell proliferation and differentiation. Additionally, by interacting with phosphatidylinositol 4-kinase type-IIα (PI4K2A), DVL is also involved in the synthesis of PI. Acetaldehyde, the main product of ethanol metabolism, disrupts the interaction of NXN with DVL. Therefore, if acetaldehyde is able to destabilize NXN/DVL interaction, then it is logical to propose that oxidative stress induced by alcohol consumption leads to the disruption of this interactions and as a result, it might modify DVL-dependent PI production during ALD progression.

Thus, in this investigation we determine the effects of chronic alcohol consumption on the status of NXN interaction with DVL in the mouse liver and in a cell culture system. Our results describe a mechanism by which oxidative stress produced by alcohol metabolism disrupts NXN/DVL interaction allowing the production of PI(4)P, a PI required for the replication of HCV (Fig. 1). These results provide a new mechanism showing that NXN also is involved in the regulation of PI production and represent the first evidence showing the direct participation of PI in ALD progression. Additionally, our findings strongly suggest that the increment of PI(4)P production induced by chronic alcohol consumption might sensitize and facilitate the viral entrance into the liver of chronic alcoholics.