How Americans remember and forget the U.S presidents

Groups of people remember and forget events that occurred in the past, just as individual people remember and forget events occurring in their lifetimes. The study of the memories of a group is called collective memory, and it is a relatively new area of research. Of course, the memories reside in individuals—there is no “group mind”—but memory and forgetting of important events can be studied at a societal level. 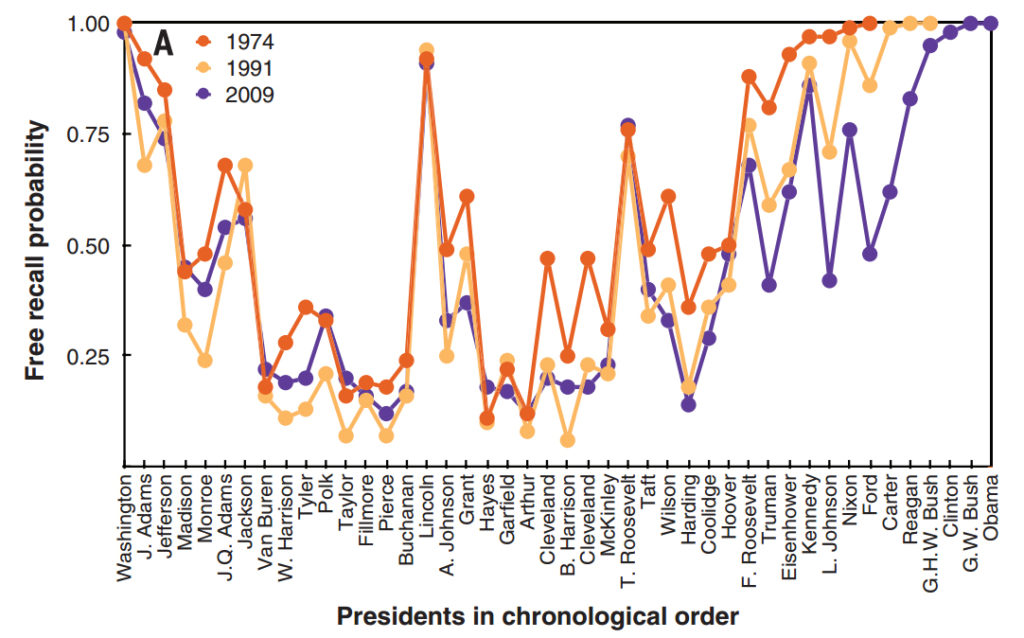 In our collective memory experiments, we tested Americans’ abilities to remember the U.S. presidents, because leaders are an important part of a country’s history, and all U.S. citizens know who the current president is. To study memory for the presidents, in 1973, 1991, and 2009, we asked college undergraduates to name as many presidents as possible in 5 minutes. All students remembered the names of the first few presidents (like Washington, Jefferson, etc.), the most recent presidents (like Ronald Reagan in 1991), and also Abraham Lincoln (Fig. 1). However, most presidents were slowly forgotten over time. In fact, we were able to plot a forgetting function for six recent presidents (Fig. 2). Kennedy and Nixon are not being forgotten as fast as other recent presidents. We think Abraham Lincoln is an example of a distinctive president who was well remembered despite being in the middle of the list (probably due to his being president during the U.S. Civil War). Note from Figure 1 that other presidents from the 1800s are largely forgotten today, at least on a brief test.

In a related study conducted in 2014, we asked hundreds of people online to name as many presidents as they could. The pattern of results looked very similar to the earlier data. We were able to reproduce the results in Figures 1 and 2 with these data.

In another set of studies, we asked people to recognize the names of the presidents. That is, we showed a large internet sample of people the names of many individuals—presidents, other famous Americans, and other names—and had them pick which names belonged to presidents and to rate their confidence in their judgments. Overall, recognition was much higher than recall, a common finding, but not all presidents were recognized well; the same ones who were poorly recalled were poorly recognized. 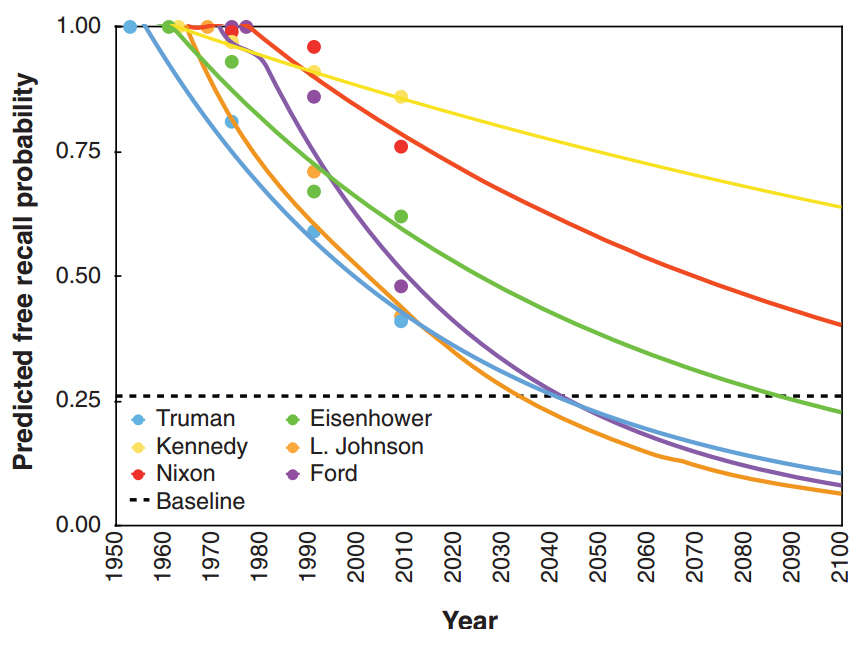 Fig. 2. Our predictions for how quickly six recent presidents will be forgotten over the next 100 years. The dotted line is how well the average president is remembered (not counting the first few or most recent presidents). We estimate the names of Presidents Ford, Truman, and L. Johnson will be mostly forgotten by the year 2040.

The study of collective memory is an exciting new area of research because it is interdisciplinary, combining psychologists’ techniques used to study learning and memory with research scholars working in other traditions such as history, sociology, anthropology, and communication studies. One interesting topic is how collective memory defines the individual identity of a person as a member of a country, a state, a city, a school, and all the other groups to which someone belongs. Collective memory can be studied at multiple levels, from the family to the nation state.