How can we remove radioactive Cs from nanosheet edges of clay in soil environment?

There has been steady progress in the decontamination work of radioactive Cs originating from the Fukushima Daiichi Nuclear Power Plant accident of Tokyo Electric Power Company in 2011. According to the Ministry of the Environment, Government of Japan, whole area decontamination on the basis of the Act on Special Measures was completed on March 19, 2018, except for the Difficult-to-Return zones. In the decontamination work, the top soil of the ground is removed because radioactive Cs localizes within the top ~5 cm of soil. The volume reduction of contaminated soil is then conducted employing solution treatment, which yields a large amount of secondary waste such as turbid water containing radioactive Cs. The subject of water saving has come to our attention concomitantly with solution treatment from the viewpoint of both future recycling and reusing the soil products contaminated by radioactive Cs as well as the decrease of the decontamination cost. 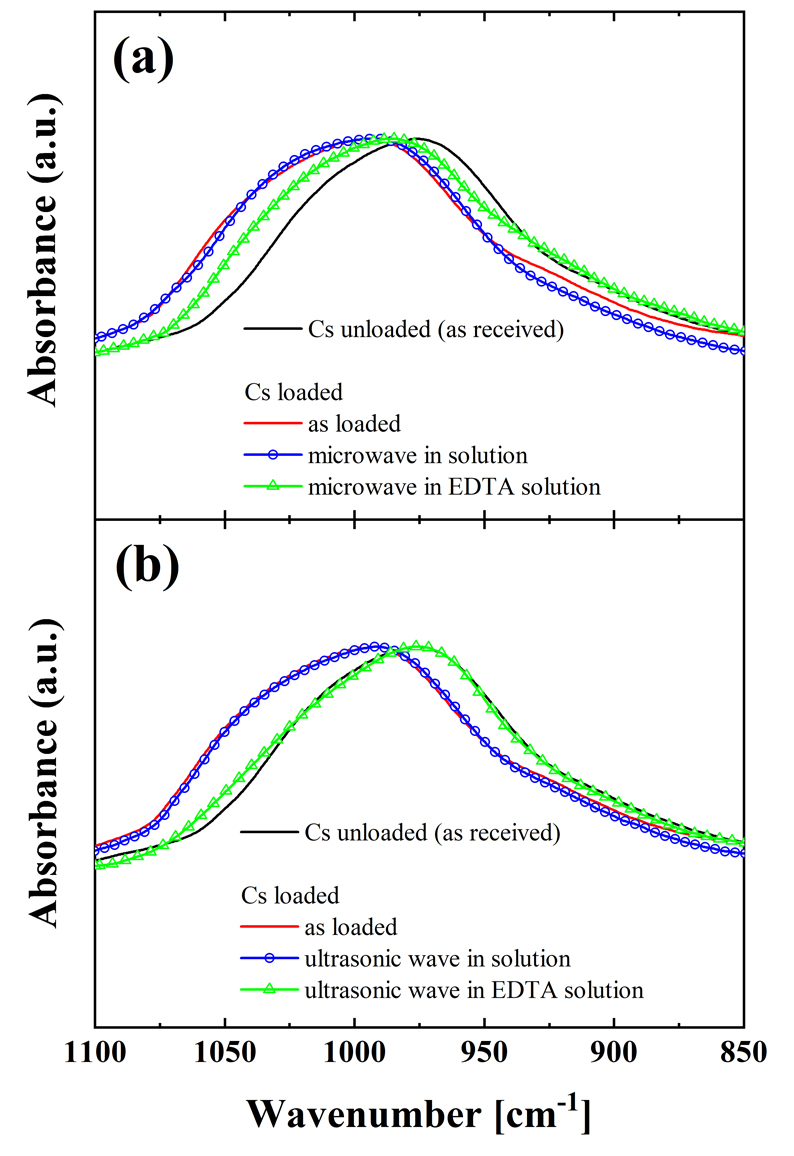 Fig. 1. FT-IR spectra for Cs-loaded samples subjected to irradiation with (a) micro and (b) ultrasonic waves in aqueous solution. The data for the samples treated with and without EDTA chelate are shown by green solid line with open triangles and blue solid line with open circles, respectively. For comparison, the spectra for Cs-unloaded (as received) and Cs-loaded (as loaded) samples without irradiation are added both in Figs (a) and (b) as black solid line and red solid line, respectively.

Clay minerals consisting of two-dimensional (2D) nanosheets and interlayer spaces are one of the major substances in soil. A hexagonal cavity on the surface of a 2D nanosheet is regarded as an adsorption site for radioactive Cs because of its geometrical suitability for capturing Cs cations. Besides the layer surface, local molecular structures built by nanosheet insertion into the interlayer space have been successfully identified to be attributable to Cs adsorption. The nanosheet insertion create angstrom-scale open spaces, in which a molecular site characteristic of 2D structures, i.e. a nanosheet edge, is available. A population of Cs is found to adsorb so adhesively in the open spaces that it cannot be decomposed by a hydrochloric acid solution of pH 1.0. Here, we propose the application of irradiation with ultrasonic waves in addition to microwaves employing ethylenediaminetetraacetic acid (EDTA) chelate to aid the decontamination of Cs from the nanosheet edges.

Figure 1 shows results of Fourier transform infrared (FT-IR) spectroscopy, in which the spectra for the Cs-loaded saponite subjected to irradiation with micro and ultrasonic waves are presented. In all the spectra, an absorption band at wavenumbers of around 1000 cm-1 appears, which is attributable to Si–O stretching vibrations. The wavenumber of the Si–O stretching vibration band for the Cs-loaded sample is higher than that of the Cs-unloaded one, signifying that the Si–O bonds are strengthened upon Cs loading. Our former studies have shown that Cs chemisorbs as the Cs2O compound at the chemically active nanosheet edges dominated by O atoms as illustrated in Figure 2. The blue shift of the Si–O vibration band upon Cs loading is thus the consequence of Cs chemisorption with O atoms at the nanosheet edge sites.

Fig. 2. Schematic illustration of Cs chemisorbed as Cs2O compound at nanosheet edges. The optimized molecular structure of Cs chemisorbed at O atoms located in SiO4 tetrahedron is highlighted. Cs atoms are described in purple, whereas atoms corresponding to O and H atoms are red and white, respectively.

Irradiation with micro and ultrasonic waves in aqueous solution without EDTA chelate does not have an influence on the peak shift of the Si–O vibration band, signifying that the Si–O bonding nature is unchanged by irradiation. In contrast to that, the Si–O vibration band observed for the microwave-treated sample in EDTA solution is significantly peak shifted toward lower wavenumbers (see Fig. 2 (a)), indicating that the Si–O bonding is weakened upon addition of chelate. This indicates that a population of Cs chemisorbed at the nanosheet edges is partially detached for the microwave treated samples in EDTA solution. The red shift with EDTA solution is further enhanced for the sample subjected to irradiation with ultrasonic waves, coming back to the same peak position as that of the Cs unloaded one (see Fig. 2 (b)). Ultrasonic irradiation with efficient energy deposition could detach a greater population of Cs from the nanosheet edges.