How carbon monoxide interacts with the rutile titania surface?

Carbon monoxide (CO) and titanium dioxide (TiO2) are among the most studied probe molecules and metal oxide single crystalline supports in surface science, respectively. The variations in the adsorption infrared or ultraviolet-visible spectra of CO have been widely used to understand adsorption and reactivity of surfaces. The high thermal stability and mechanical strength of TiO2 surfaces, together with their high-surface area and acid-base properties, are important factors determining the broad usage of this metal oxide as a support in heterogeneous catalysis. Also, pristine TiO2 materials display interesting photocatalytic properties, which are affected by nanostructuring. Therefore, vast research work considering 0D (spheres), 1D (filled or empty cylinders), 2D (sheets) and 3D (bulk) structures were performed to understand how the TiO2 morphologies affect the properties. Curiously enough, experimental research studies considering the interaction of CO with bare TiO2 surfaces are rare and originated conflicting results in the case of the rutile TiO2(110) surface (Fig. 1). 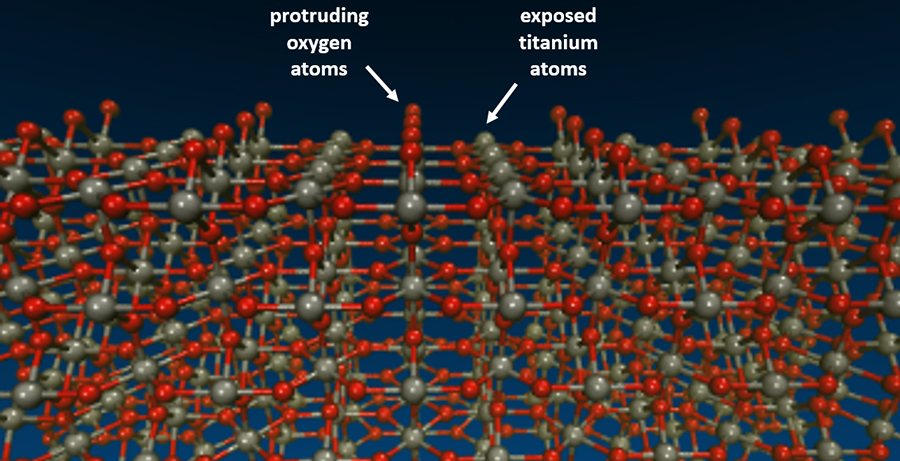 For the rutile TiO2(110) surface, the available experimental information based on infrared spectroscopic observations, suggests that at CO coverage below 1 ML (monolayer) CO adsorbs perpendicularly to the surface, through the direct interaction of its C atom with an exposed Ti atom on the oxide surface. These sites are the most stable ones for CO adsorption. This interpretation seems to be firmly accepted by the community of researchers. With increasing surface coverage, two different views arise from the experimental studies. For 1 ML coverage, it is argued that the molecular axis of the CO molecules deviates from the perpendicularity by about 20o, which leads to the minimization of the repulsion between CO molecules that are interacting with neighboring exposed Ti atoms on the TiO2(110) surface. Another very recent analysis of infrared data suggests that the CO molecules are also adsorbed onto the exposed Ti atoms but perpendicular to the surface. For coverages above 1 ML, all the exposed Ti atoms on the surface are already involved in interactions with CO molecules. Therefore, the additional CO molecules start to interact with other adsorption sites available on the rutile surface. The experimental evidences suggest that the additional CO molecules interact with the protruding rows of oxygen atoms (Fig. 1) but two views were suggested. One of them argues that the CO molecules have their molecular axis parallel to the surface plane while another line of view suggests that the molecular axis is nearly but not entirely parallel to the surface. 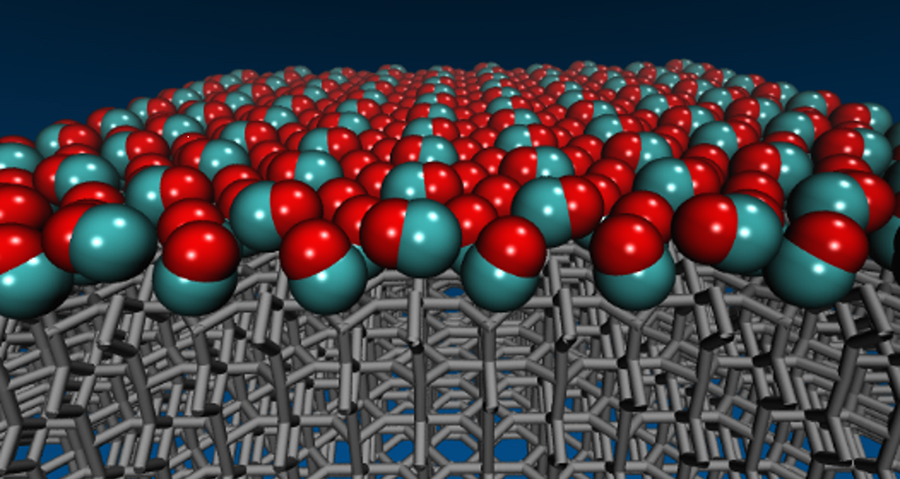 Fig. 2. View of the most stable configuration for 1.5 ML of CO on the rutile TiO2(110) surface. Red and cyan spheres denote, respectively, oxygen and carbon atoms from CO, while gray cylinders depict the rutile TiO2(110) surface. The almost horizontal and the nearly perpendicular CO molecules are interacting with the protruding oxygen atoms and with the exposed titanium atoms, respectively.

As state above, nanostructuring affects the properties of TiO2. Hence, it may happen that subtle differences in the samples of the TiO2(110) surfaces used in the experimental studies are originating the conflicting results. To shed light on the preferred orientations of the molecular axis of the CO molecules on the TiO2(110) surface upon the increase of the surface coverage we performed computer simulations, employing state-of-the-art approaches based on the density functional theory and a well-defined TiO2(110) surface structure. The calculations confirm the experimental findings regarding the most stable adsorption sites for both the low and high coverage regimes. For coverages below or equal 1 ML, the CO molecules adsorb onto the exposed Ti atoms, while for coverages above 1 ML, the additional CO molecules interact with the protruding oxygen atoms on the TiO2(110) surface (Fig. 2). From the simulations, it is also clear that for coverages below 1 ML, the most stable orientation is the one with the CO molecular axis perpendicular to the surface. However, for coverages above or equal 1 ML, the molecular axis of the CO molecules interacting directly with the Ti atoms are tilted from the normal to the surface and the tilting angle increases with increasing surface coverage. Importantly, these CO geometry predictions are supported by the very good agreement between the calculated and experimental frequency shifts of the CO molecule in the gas and adsorbed phases.