How changes in our genes impact outcome after stroke

An ischemic stroke is the sudden death of brain cells due to lack of oxygen and glucose, which is caused by blockage of blood flow to the brain. Stroke is a leading cause of death around the world, and largely occurs in adults over the age of 65. As the population of individuals over the age of 65 grows, the need to find a solution to this problem grows as well. Research has shown that nutrition plays an important role in the risk and outcome of ischemic stroke. 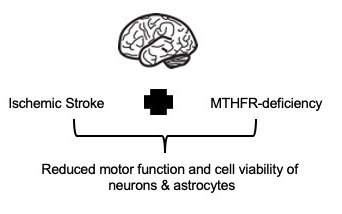 Fig. 1. Summary of experimental results from present study. An ischemic stroke combined with a genetic deficiency in methylenetetrahydrofolate reductase (Mthfr) results in impaired motor function and reduced viability in astrocytes and neurons, the major cell types that make up brain tissue.

Folic acid is a B-vitamin that is important for many processes in the brain. Most of the folic acid we require is obtained from our diet, food like liver, leafy green vegetables and lentils are very high in folic acid. Some people cannot effectively use folic acid, because they have inherited a defect in a gene called methylenetetrahydrofolate reductase (Mthfr). The defective Mthfr gene results in an accumulation of a toxic product known as homocysteine. The prevalence in the defective form of the Mthfr gene has been reported in a large proportion of North American and European populations. Research shows that individuals with defects in the Mthfr gene and elevated levels of homocysteine are at greater risk for a stroke and have worse outcomes after stroke. It is not clear why some individuals are more susceptible to stroke, our research will better our understanding of the potential role of vitamins, coupled with ageing in the process. The aim of our study was to understand how reduced levels of MTHFR impact stroke outcome in aged male mice. The age of the mice we used in the study corresponded to older adults that older than 56 years of age.

We induced a stroke in an area of the brain involved in motor function and mice with reduced levels of Mthfr. Our results show that mice with low levels of Mthfr performed poorly on tasks that assess motor function. We tested animals on a motor task each day, called the single pellet reaching task. The daily testing on the single pellet reaching task is similar to undergoing rehabilitation in humans, and we observed that mice with reduced levels of Mthfr showed recovery after 5 weeks of rehabilitation.

In the brain there are two types of cells, neurons and astrocytes. Traditionally astrocytes have been thought to support neuronal function, but recent studies have shown that astrocytes play a significant role in the brain after an injury, such as stroke. In the present study, the astrocytes with reduced levels of Mthfr showed decrease in survival after stroke. The measurements showed higher levels of Caspase-3 positive astrocytes that were exposed to a model of stroke. Caspase-3 is an enzyme that plays a role in getting rid of cells that are damaged, and this would not normally be high in healthy cells.

With the number of people over the age of 65 increasing, it is important to understand how stroke works and how patients can recover from it. One important finding was that daily training tasks can help mice recover from a stroke, even if they have high levels of homocysteine and reduced levels of Mthfr. The research provides insights into how the brain changes with reduced levels of Mthfr and in response stroke.