How do cats avoid small obstacles during walking?

Avoiding obstacles obstructing a walkway is a usual, but not a trivial motor task. A lot of work had been done so far to elucidate how biped humans solve this task, but only a few efforts were directed towards better understanding how this task is solved by quadrupeds. To fill this gap we completed a study in domestic cats, ample representatives of quadruped mammals.

Four cats were trained to walk repeatedly in a triangular corridor with 2.5 m long and 0.25 or 0.15 m wide legs. At various locations on the floor of one of corridor legs we placed small obstacles, round objects 2.5 cm in diameter and 1 cm in height (Fig. 1A). Though an object was not harmful to cats in any manner, cats consistently avoided stepping on it. To monitor right forepaw movement during walking, a light-emitting diode (LED) was attached with an adhesive tape to cat’s skin covering the metacarpal joint. A computerized, active-marker three-dimensional real-time motion capture and analysis system Visualeyez (PTI) was used to record paw movements.

Fig. 1. A cat walking along a corridor cluttered with multiple obstacles (A). Right forepaw placements during unobstructed walking and walking obstructed with a single obstacle (B-C).

During walking in a wide corridor, which did not restrained lateral deviations of walking trajectory, cats chose to circumvent a single obstacle positioned on a site of typical right forepaw placement during unobstructed walking. During circumvention, directions of two strides, which passed an object, were changed. At the same time, durations and swing-to-stride ratio of these strides were preserved (Fig. 1B-E; 2D-F).

During walking in a narrow corridor, which restricted lateral deviations of walking trajectory, cats were forced to step over an obstacle. Doing so, cats divided completion of the task between two consecutive strides. In the first stride, a cat placed a paw before the obstacle positioned on a site of typical right forepaw placement during unobstructed walking. This stride was shortened, and its duration and swing-to-stride ratio was reduced. A cat negotiated the obstacle with the second stride, which height was increased, while duration and swing-to-stride ratio returned to the norm (Fig. 2G-I).

During walking in the wide corridor, which surface was cluttered with multiple obstacles, cats were flexible in using strategies to avoid obstacles (Fig. 1A). They could either circumvent or stepped over obstacle, or mixed both strategies together. Thus, strategies for obstacle avoidance were not exclusive; rather, they complemented each other during walking in complex environments. 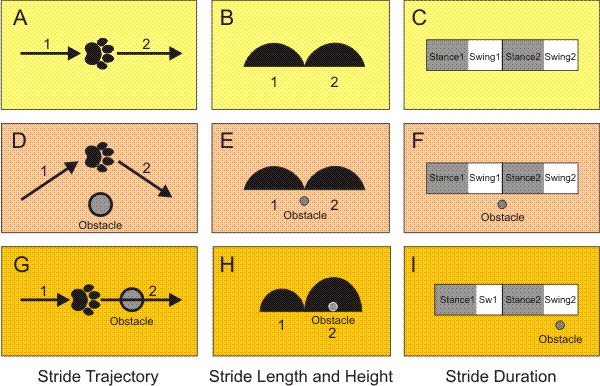 Fig. 2. Spatial and temporal parameters of two consecutive strides during unobstructed walking (A-C), circumvention of an obstacle (D-F), and stepping over an obstacle (G-I).

The aim of obstacle avoidance during locomotion is to place the foot at a safe distance away from the obstacle. We have found in our study that to achieve this goal, quadruped cats use two main strategies: circumvention and stepping over the obstacle. Remarkably, circumvention is the preferred strategy for avoiding a single obstacle. Differences between spatial and temporal parameters of strides during execution of strategies for obstacle avoidance suggest distinctive neural control of these two motor behaviors. It seems that stride adaptations for circumvention are achieved mainly due to changes in neuronal circuits immediately controlling limb muscles. Adaptations necessary for stepping over an obstacle are more complex; very likely, they resulted from changes in both neuronal circuits controlling muscles and networks of the spinal locomotor rhythm generator. We hypothesize that a choice and execution of the strategy for obstacle avoidance is determined by minimizing the complexity of neuro-motor processes required to achieve the behavioral goal.