How do chaperones save protein folding?

Protein folding both in vitro and in vivo goes via formation of intermediate states. These “molten globule”-like states fluctuate, expose their hydrophobic sites and therefore easily aggregate. This retards or even inhibits formation of protein native structures, especially at elevated temperatures and/or elevated concentrations of the folding intermediates.

In vitro, the aggregation effect can be decreased by lowering the temperature or adding some special low-molecular compounds. In vivo, there are special trouble-shooters: proteins called chaperones. Some of them (e.g., chaperone GroEL) have large complex oligomer structures with inner cavities and mobile regions. It is often assumed that these chaperones are enzymes possessing the “foldase/unfoldase” activity.

However, if so, chaperons are really odd enzymes! 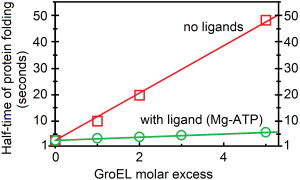 First, they are too much: Even only one (albeit the most abundant) chaperone, called GroEL, amounts to »1% of total cellular proteins in normal and »10% in heat shock conditions. That is, their amount is close to that of their substrate molecules (folding intermediates), while the amount of conventional enzymes is by many orders of magnitude lower than that of their substrates.

Such a high concentration of chaperones can make sense if they are aimed only to bind folding intermediates in order to save them from aggregation (which is known to be the main obstacle to in vitro protein folding). After the binding, ligands like Mg-ADP, Mg-ATP and co-chaperone GroES accelerate the subsequent release of the target protein (compare the red, green and base lines in Figure 1). 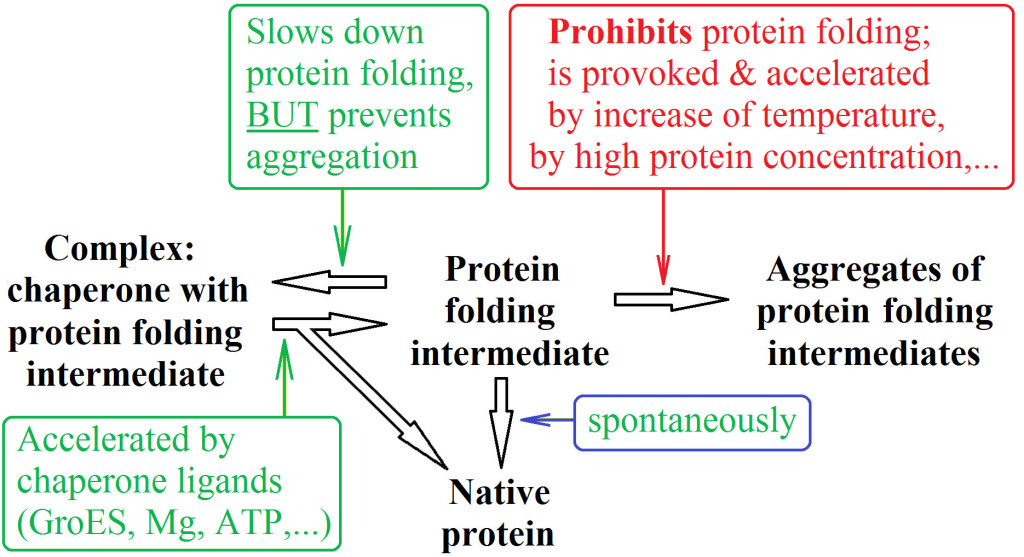 Taking all the above into account, the following general model of chaperone functioning may be proposed.

Strict experimental evidence that apo-chaperonin GroEL does not accelerate protein folding, although it does accelerate one of its steps.
Marchenko NY, Marchenkov VV, Semisotnov GV, Finkelstein AV
Proc Natl Acad Sci U S A. 2015 Dec 15