How does aspirin inhibit melanin synthesis?

Non-steroidal anti-inflammatory drugs (NSAIDs) are known to act by directly suppressing the activity of cyclooxygenase, the key enzyme catalyzing the biosynthesis of prostaglandin, which induces inflammation. Therefore, NSAIDs are usually used for treating pain, inflammation, and fever. Acetylsalicylic acid (Aspirin) is the most prominent NSAIDs and it is available over-the-counter all over the world. Also, aspirin has been shown to be effective as a blood thinners drug in preventing heart attacks, stroke, and cerebral thrombosis. 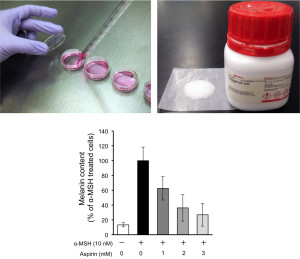 Previously, our group found another characteristic of aspirin that inhibits melanin synthesis of murine malignant melanoma. Therefore, we investigate the inhibitory effect of aspirin on aspects of the regulation of melanogenic genes and intracellular pathways.

Skin pigmentation results from melanin synthesis by melanocytes and is enhanced by exposure to UV radiation. Melanin is responsible for determining our skin color, and it plays an important role in protecting the skin cells from UV radiation. In melanin synthesis, there is a crucial enzyme called tyrosinase that catalyzes chemical reactions: amino acid tyrosine to melanin. Therefore, mutation of the tyrosinase gene causes albinism.

In this study, we used the α-melanocyte stimulating hormone (α-MSH) to induce melanogenesis of melanoma. Thus, melanoma appears as UV-irradiated cells.   In the presence of α-MSH, melanin content of cells was significantly increased. On the other hand, melanin content of cells that treated with aspirin was dramatically decreased. In the next step, we focused on the microphthalmia-associated transcription factor (Mitf) that is an important factor of melanin synthesis. Once activated, Mitf promotes gene transcription by binding the promoter region of tyrosinase gene. Interestingly, aspirin inhibited the Mitf gene at the transcriptional level. The fact that suppression of Mitf gene imply that aspirin depresses the tyrosinase gene and the subsequent inhibition of melanogenesis. Furthermore, we investigated the effect of aspirin on the extracellular signal regulated kinase (ERK) pathway. ERK plays an important role in cellular processes such as survival, proliferation, cell cycle progression and melanin synthesis. Activated ERK can phosphorylate Mitf, which causes degradation of the Mitf, and this process also brings about inhibition of melanin synthesis. Surprisingly, our result demonstrated that aspirin activated the ERK and it is also a leading cause of inhibition of melanogenesis. Taken together, our results suggest that aspirin can inhibit melanin synthesis that is caused by both inhibition of the Mitf gene expression and ERK activation. 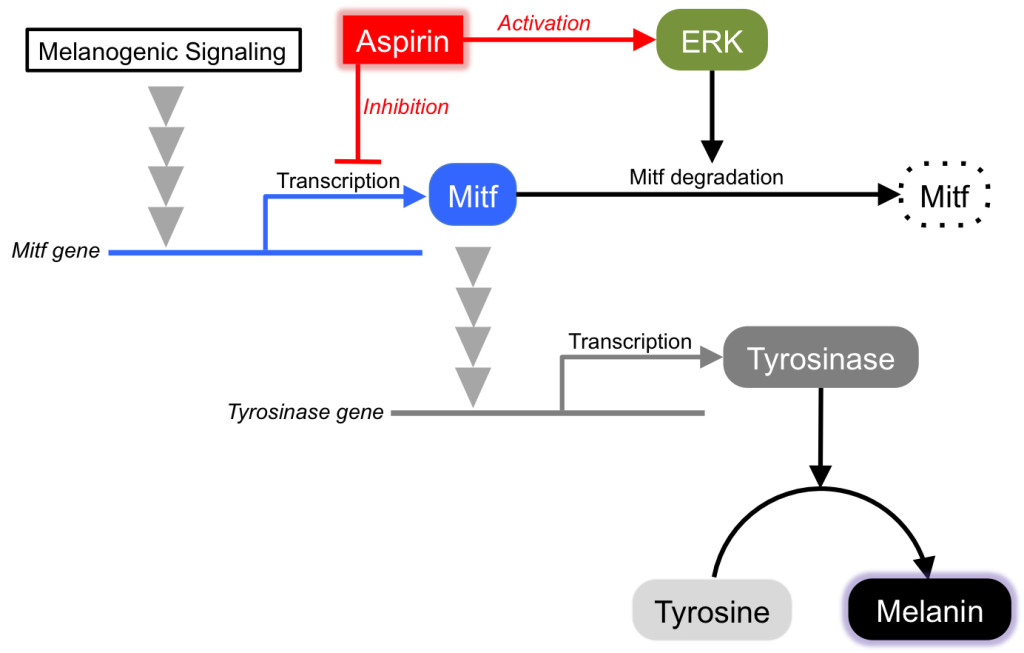 Aspirin is one of the most well studied NSAIDs and has been the topic of more than 2000 articles published in 2015. So, we expect that other potential effects of aspirin will be revealed in the future.