How does fever work? As a non-specific stressor

Despite the spectacular discoveries in immunology and recent biotechnological advances, amazingly there has been no consensus on how fever functions to help control infections. Does the heat of fever act as an immune stimulant, or does it harm pathogens? Are only cold-adapted pathogens susceptible, or can fever harm pathogens in general; and if so, how? We propose that fever acts as a systemic non-specific stressor to preferentially harm pathogens. Fever is part of a larger network of non-specific stressors forming a basic, but little-recognized, component of innate immunity.

Ideally host defenses should act specifically by harming pathogens without causing collateral self-harm. In contrast, non-specific stressors can harm pathogens and host alike. These non-specific stressors include reactive molecular species (free radicals), heat, nutrient and oxygen restriction, and acidity. Completely non-specific stressors can be used for host defense, based on differences in vulnerability between pathogens and host and on the localization of the pathogens (including infected cells and tumor cells). Pathogens typically rely on growth and replication to be pathogenic, but growth and replication are universally vulnerable to stress. Meanwhile, host cells at the infected site need only try to survive in the locally stressful conditions, and infiltrating immune cells are replaceable and are usually produced at distant, less stressful locations such as bone marrow and lymphoid tissues. Regionally around infected sites, the well-described linkage of coagulation and inflammation reduces blood flow. This adds to the non-specific stress as well as helping contain pathogens within the stressful area. Systemic stressors during severe infections such as fever (as a heat stressor) and loss of appetite and iron sequestration (as nutrient stressors) support and facilitate the more intense regional and local stressors.

Despite the common view that the heat of inflammation is solely due to vasodilation, local heat production occurs at inflamed areas. Thus, systemic febrile temperatures need only enhance the temperature at the infected site enough to enable locally generated heat, in combination with all the other simultaneously occurring stressors, to kill the more vulnerable pathogens. While many immune responses function best at slightly elevated temperatures, they also function best in slightly acidic and hypoxic conditions—exactly the working conditions to which immune cells evolved. Thus, we propose that 1) the primary function of fever is to add slight systemic heat stress to support the locally generated heat at infected sites (to act in combination with other stressors), and 2) fever’s effects on immune enhancement evolved secondary to the innate immune system’s active use of non-specific stressors in defense. 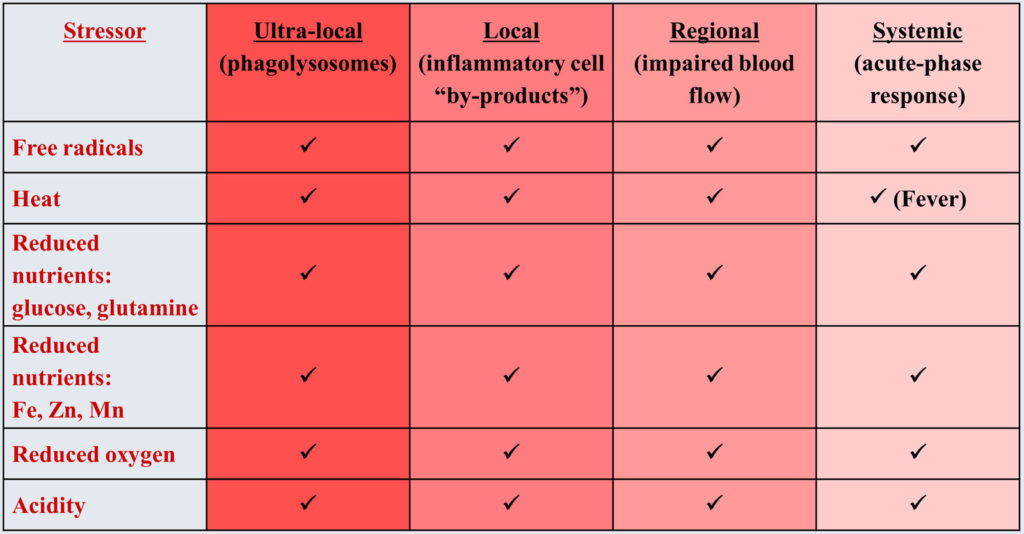 We propose that during infections, direct targeted harm against pathogens is supplemented by multiple non-specific stressors actively applied locally, regionally, and systemically. This network of completely non-specific stressors constitutes an ignored, but fundamental and evolutionarily basic, part of innate immunity. Of course, there are costs and risks for hosts using non-specific stress for controlling pathogens, but it is essential that this defense be recognized for the benefits it can provide.