How does the brain manage our anger?

Aristotle is quoted to have said: “Anybody can become angry, that is easy; but to be angry with the right person, and to the right degree, and at the right time, for the right purpose, and in the right way, that is not within everybody’s power and is not easy.” Aristotle thus conveyed the complex nature of anger, but he also underlined key elements of anger which are reflected in modern psychological science. Anger is constantly regulated and very much adapted to social norms. For example, people would probably not shout in the middle of a restaurant at a rude waiter, but rather restrain themselves and maybe later choose a more subtle form of disapproval (e.g. minimizing the tip). There are many different ways to express anger and while some form of aggression is probably most typical, humans have the power and flexibility to monitor, evaluate and modify their anger experience and expression. Another key element is that anger is mostly directed towards other people. It is within our social interactions that most emotions are experienced, and especially anger. With this in mind, we wanted to mimic as realistically as possible an interpersonal situation which induces anger during functional magnetic resonance imaging (fMRI). Moreover, in view of such a situation, we wanted to identify the neural substrates that differentiate between those people who tend to have more aggressive reactions compared to those who have conciliatory reactions. This would highlight regions in the brain which could be involved in managing anger and avoiding aggressive retributions. 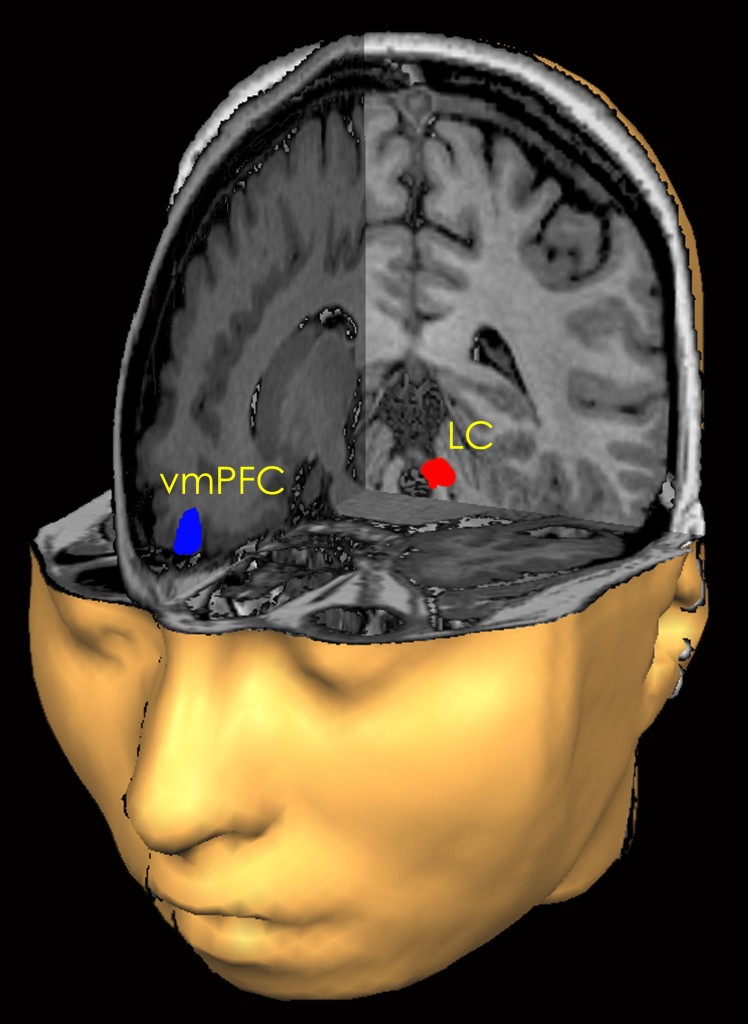 Illustration of the brain regions found to differentiate between individuals reactions to interpersonal provocations. Those who tend to reject angering unfair offers had increased activity in the Locus Coeruleus (LC; red region), the major source for Noradrenalin secretion in the brain, critically involved in arousal and shown to contribute to propagating aggression. Those who tend to accept angering unfair offers had increased activity in the ventromedial Prefrontal Cortex (vmPFC; blue region), a region generally implicated in emotion regulation, including regulating anger and aggressive reactions.

To this end, participants played an interactive anger-provoking paradigm based on a modified version of the Ultimatum Game (UG), a classic social decision-making paradigm in which two players need to agree on how to split a sum of money between them. One player makes the offer on how to split the sum of money while the second decides if to accept, at which each player gains the assigned sum of money, or if to reject and then both lose. Previous findings have indicated: (1) that unfair UG-offers induce anger; (2) that the rejection of such unfair offers at ones’ own personal cost is a sign of aggression; and (3) that accepting unfair offers is linked to a capability to overcome the anger and aggressive inclinations. Our modification induced genuine interpersonal anger by incorporating in real-time and during fMRI scanning repeated verbal negotiations infused with angering provocations by an obnoxious confederate who was making mostly unfair offers. Our main findings showed that when confronted with such provocations, individuals with a tendency for aggressive reactions (reject more) were more angry and had increased activity in a region corresponding to the Locus Coeruleus (LC) and decreased activity in a region of the ventromedial Prefrontal Cortex (vmPFC), while individuals with a tendency for conciliatory reactions (accept more) had an emotionally balanced response, though still angry, and the reverse pattern of brain activity – increased vmPFC and decreased LC activity. Overall, we showed the vmPFC modulated the emotional experience en route to increased gain in the game.

Interestingly, our results are consistent with previous findings implicating LC with aggressive behavior and vmPFC with emotion regulation. Results are important since they demonstrate how realistic social interactions may be embedded in the confined settings of the scanner. This may provide insight at how the brain actually processes information in real-life. In addition, as Aristotle insinuated, it is not easy to manage anger and maladaptive anger is common in various clinical populations such as anxiety disorders and antisocial personality. Our findings may have important implications for understanding and treating pathological conditions of anger.