How engineered nanoparticles are affecting the treatment of wastewater

In recent years, engineered nanoparticles (ENPs) have been incorporated into a variety of consumer products such as technology, cosmetics, pharmaceuticals and clothing to name but a few. ENPs can be defined as intentionally created particles sized 1-100 nanometres. They are utilised commercially often for their ability to inhibit microbial growth and to destroy the harmful effects of microorganisms. Their increased use has led to concerns over their impact on both human health and the environment. Most commercially-used ENPs are able to attach to biosolids and are transported to wastewater treatment plants. As treatment of wastewater relies on microorganisms, there are concerns over the effects that these ENPs have on these biological processes. Additionally, biological processes in wastewater treatment can alter the properties of ENPs (including their fate, toxicity and transport) turning them into aged-ENPs. 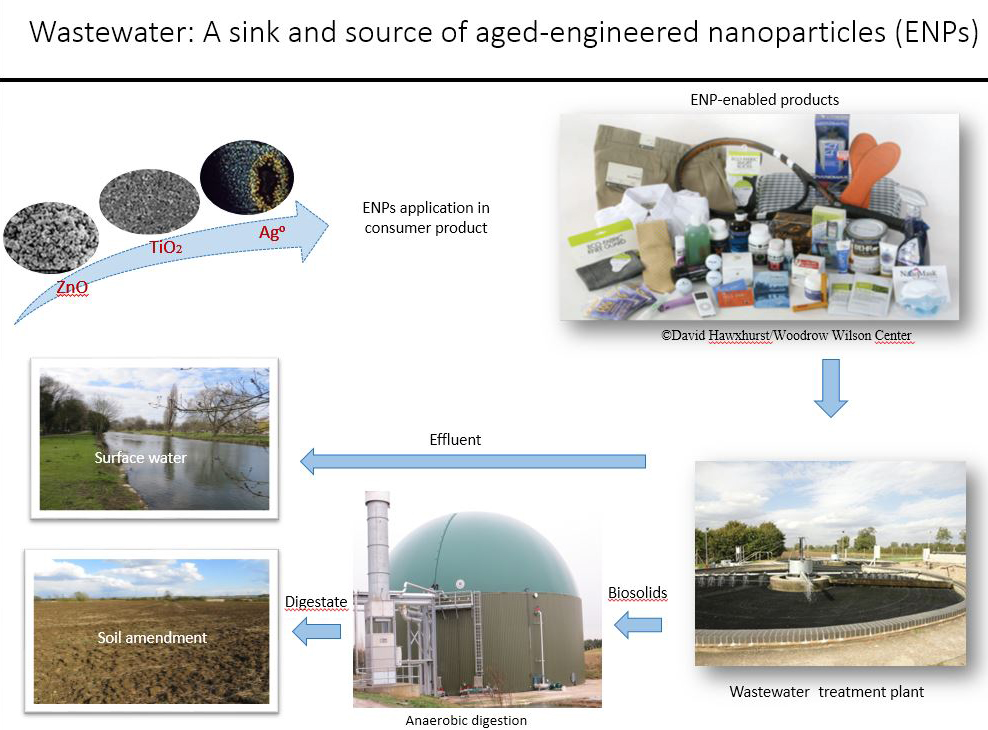 To date, research into the effects of ENPs on wastewater treatment has been performed at a laboratory scale only using pristine ENP forms and pure cultures. Therefore, caution must be taken when extrapolating these findings to real wastewater treatment plants. In addition, much of the work has focussed on aerobic biological processes (involving oxygen), with much less knowledge on the impact of ENPs on anaerobic biological processes (without oxygen). One such process is anaerobic digestion to produce biogas, which involves multiple, complex processes. While heavy metals are known to be able hinder these processes and the functioning of the involved microorganisms, the effects of their corresponding nanoparticles are less investigated and understood.

In our recent study, we tested the effects of various aged-ENPs on the functioning of pilot-scale anaerobic digesters. We tested the addition of three ENPs and compared their effects on biogas production and on the microbial community to a control and to the addition of their corresponding heavy metals in bulk.  Our study found that there were low but significant differences in methane content of biogas between the three conditions. Importantly, the hydrogen sulphide content of the biogas was lower in the ENP condition, which is desirable as its presence inhibits microbial growth thus reducing biogas production. The presence of ENPs was also found to affect microbial communities. The diversity and biomass of archaeal methanogenic microorganisms was significantly lower in the aged-ENP condition with only one genus (Methanosarcina) able to proliferate in the presence of ENPs, suggesting nanotolerance. However, this lack of methanogenic diversity does not affect methane production for biogas as the nanotolerant species possess all metabolic pathways necessary for the production of methane. In terms of bacterial diversity and abundance, some bacterial groups were reduced (e.g. Fermicutes, Proteobacteria and Bacteriodetes) while other groups were enhanced (Fusobacteria and Actinobacteria). The results suggest an initial inhibition of the anaerobic bacterial community on addition of ENPs followed by tolerance and a shift in community composition. Our study has therefore demonstrated, at pilot scale, that the presence of ENPs influences the microbial community involved in the anaerobic digestion process and therefore the process performance and biogas production. However the impact of ENPs differed to the impacts of bulk metal salts and therefore caution must be exercised when extrapolating allowable limits of ENPs in wastewater.

Acknowledgements: This study was co-funded by USEPA and NERC through the Transatlantic Initiative on Nanoparticles and the Environment (TINE) project grant NE/H01375X/1 and the Commonwealth Scholarship Commission (CSC REF: NGCA-2010-78). The perspectives and conclusions convey the views of the authors and do not reflect the views of USEPA, NERC or the Commonwealth Scholarships Commission.