How fast a single nanopore acquires its charge

Modern technologies such as smartphones, electric vehicles and various battery-powered devices increasingly require high density electric-energy storage units for improved operation. Supercapacitors are an emergent class of high-power storage devices which consist of porous electrodes that can effectively store large amounts of electrical energy in the form of an ionic cloud at the electrolyte-electrode interface. Nevertheless, the same intricate structure of narrow nanopores and nano-slits that allows high energy-density to be stored also restricts the usefulness of these storage devices by limiting their ability to rapidly release electrical energy on-demand. To release their stored energy, ions must travel over large distances within highly confined pores to charge and discharge the ionic cloud at the pore surface over short times. To meet current technology demands, it is thus essential to understand the process of ionic cloud charging within a single nanopore – the basic element of porous electrodes. 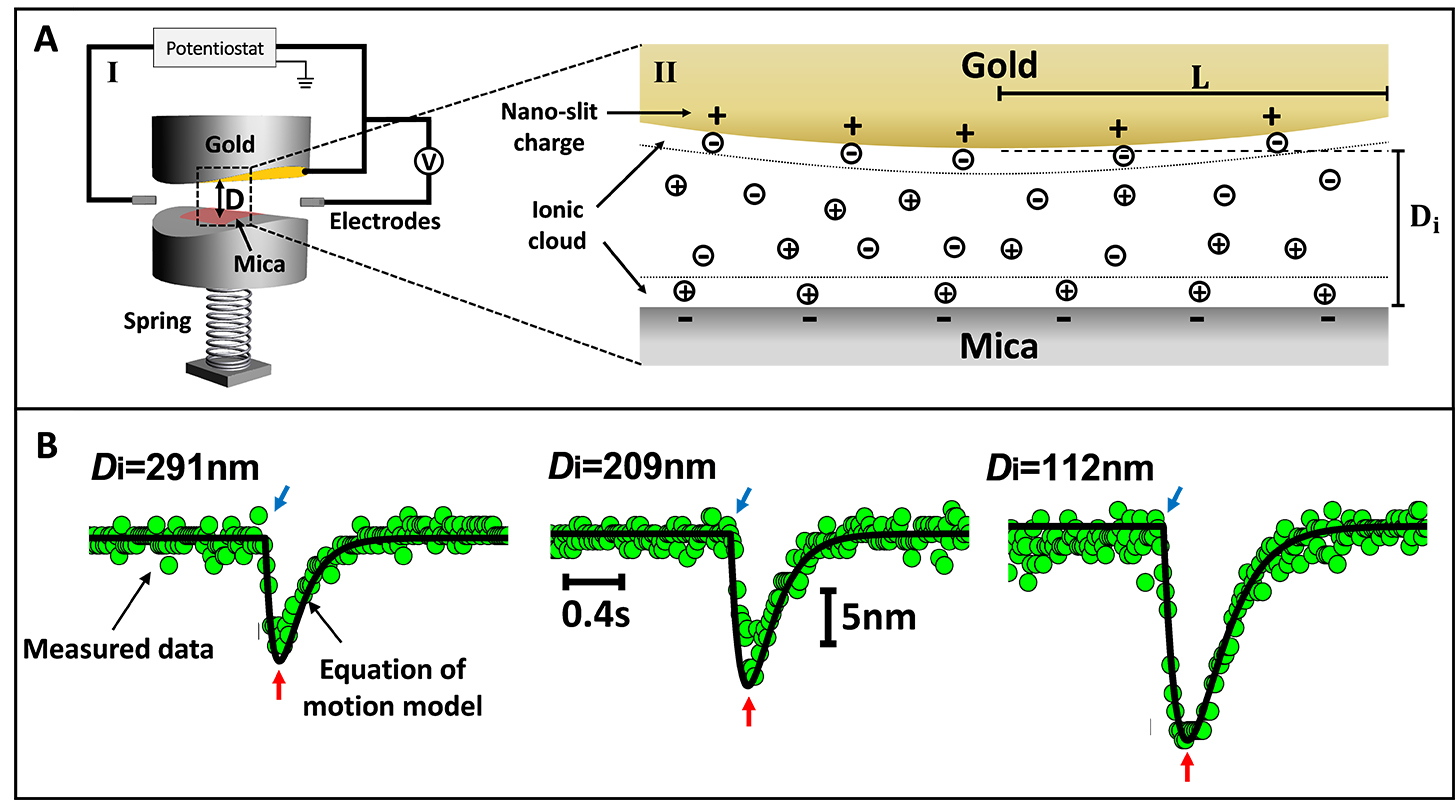 Fig. 1. A. Schematic of plates configuration in the apparatus used in this study (I) and of the nano-slit arrangement formed across the gap between the plates (II), with the principle components labeled. B. A magnified view of the observed peaks at different nano-slit thicknesses Di following application of a positive voltage to the gold. The blue and red arrows show when the mica plate starts moving towards the gold plate and returns to its original position by the restoring force of the spring, respectively. The black solid lines correspond to our model for the movement of the mica plate based on the solution of the equation of motion.

In our recent publication, we developed a novel approach to probe and measure how fast a single nano-slit can acquire its charge. To do this, we designed an apparatus, in which two round super-smooth plates – one gold, mounted on a piezoelectric tube, and second, an insulating mineral called mica, mounted on a spring – face each other across a nanometric narrow gap to create a nano-slit with a width of about 50nm and diameter of about 100µm (Fig. 1A). In this setup, the plates are initially brought to a given separation Di (i.e. the nano-slit thickness) in a salt solution that contains charged ions. Subsequently, either a positive or negative voltage is applied to the gold while measuring the gold-mica separation with a ±3Å resolution through optical interference. The abrupt change of gold surface potential generates an electrostatic force which initially either repels or attracts the negatively charged mica plate. Then, as more charged species (ions) enter the nano-slit to neutralize the new charge at the gold surface, the electrostatic force decays and the mica gradually returns to its initial position by the restoring force of the spring onto which it is mounted. This motion of the mica plate is seen as a peak which reveals how fast the nano-slit charges (Fig. 1B). By solving the equation of motion relevant to our system, we could precisely fit the obtained peaks and get a deep insight on how the nano-slit charges.

Fig. 2. A. Nano-slit charging time (τEDL) at different slit thickness Di and at different salt (NaNO3) concentrations. The upper and lower black solid lines correspond to our equation of motion model for each salt concentration. The solid blue curve is the best fit to the transmission line model. B. Nano-slit charging time at different slit thicknesses Di across a salt solution (LiClO4) which contains two charged species (ions) with different diffusion properties, where green squares correspond to the faster moving ion (ClO4-) and red squares to the slower one (Li+).

We found that it takes about one second to fully charge such a single nano-slit following a voltage application. In addition, various properties of our model system were found to affect the charging time. For instance, slower charging times were measured for narrower nano-slits and when the concentration of ions in solution was lower (Fig. 2A), indicating that ions have to travel (diffuse) a long distance (hundreds of microns) from the solution and into the nano-slit in order to completely neutralize its charge. This conclusion was further strengthened by measuring slower charging times for slower diffusing (moving) ions (Fig. 2B). Finally, our results were found to fit the transmission-line model – a theorical model for ion transport in nanopores – demonstrating that our nano-slit geometry can be used to describe the charging characteristics of a single nanopore (FIg. 2A). As such, our novel approach can help guide the development of improved storage devices through examining which properties (pore width, ions type and concentration, etc.) can speed up the charging and enhance their power-density and hence their usefulness in powering different devices.