How fractalkine is regulated in human astrocytic brain cells

The brain is made up of four major types of brain cells. Neurons, oligodendrocytes, microglia and astrocytes. Neurons (nerve cells) are specialised cells that process and carry ‘messages’ through electrical signals. Oligodendrocytes are cells which are wrapped around neurons and form a layer of insulation (myelin), which help carry the neuron ‘message’ and microglia, are cells which form the brains immune system. Here we focus on the fourth cell type known as astrocytes. Astrocytes are the most numerous and diverse type of cell in the brain and play an important role in the formation and maintenance of the brain environment as well as controlling neuronal development. 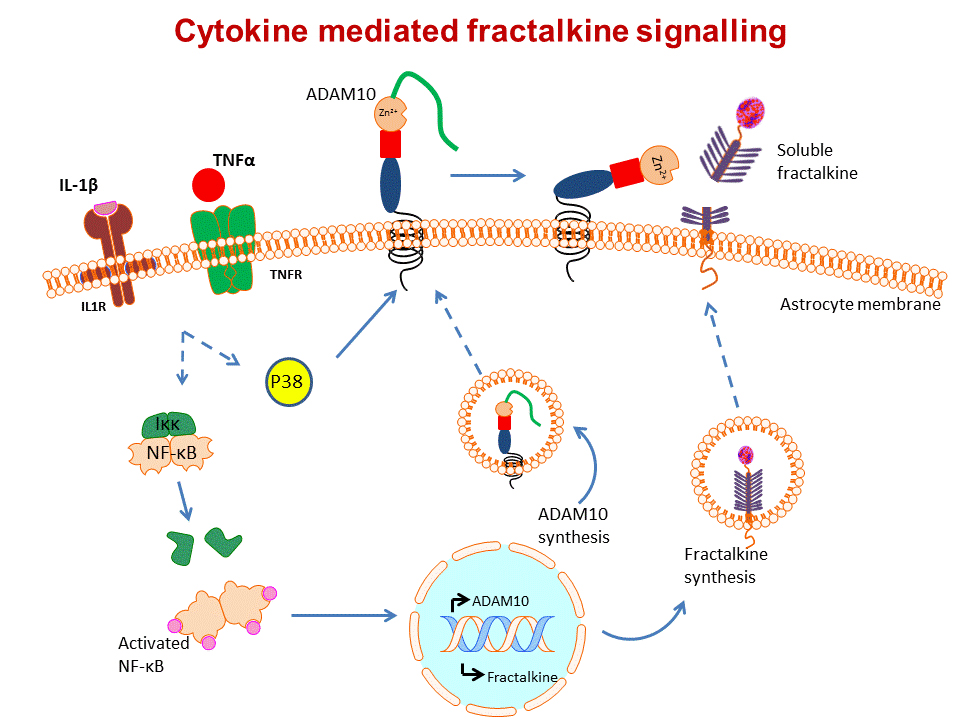 Fig. 1. Overview of the possible mechanisms of cytokine mediated increases in fractalkine release from astrocytes. IL-1β and/or TNFα signal through NF-κB which causes de-novo synthesis of fractalkine. It is then transported to the cell surface where it can be cleaved by ADAM10. p38MAPK may be phosphorylated (activated) simultaneously, which interacts with the intracellular ‘tail’ of ADAM10 causing it to switch to an active form.

All brain cells have many different proteins on their surface called receptors, which are used to communicate with other cells. These receptors are activated by molecules (also proteins) expressed on the surface of other cells. Depending on the environment, all cells have the ability to regulate whether a molecule is expressed or not. This is a fluid process as the internal cellular machinery are constantly making and replacing proteins, shuttling new proteins to the surface as well as retracting others and recycling them. These molecules at the cell surface can also be released from the cell and bind to their corresponding receptor, which can be located on a distant cell.

This study looked at a particular molecule expressed by astrocytes called fractalkine. Here, we wanted to investigate how this molecule is cleaved (or cut) from the cell so that it can relay information to other cells in the brain. A proteases is the name given to a specialised group of proteins, whose function is to cleave the bonds that hold these molecules together. Pure astrocytes grown in a dish can be stimulated with inflammatory molecules, namely Interleukin-1β (IL-1β), Tumour necrosis factor-α (TNFα) and Interferon-γ (IFNγ). These inflammatory molecules mimic the brains response to pathogens or cellular damage, which can cause the release of fractalkine from the surface of astrocytes. By first exposing astrocytes to specific synthetic inhibitors, which would block the function of a particular protease, we deduced that ADAM10 is the primary protease responsible for cleaving the fractalkine molecule from the surface of astrocytes under inflammatory conditions. We also tried to uncover some of the intra-cellular machinery involved in the initial production of fractalkine. Again, by using specific inhibitors of intracellular molecules, we found that a protein called p38 may assist ADAM10 in releasing fractalkine from the cell surface. In addition, we also found that a transcription factor, called NFκB, is involved in the initial production of fractalkine when astrocytes are exposed to the inflammatory molecules IL-1β, TNFα and IFNγ. Transcription factors are molecules that bind to our DNA and control the rate at which certain proteins are made from our DNA.

Understanding more about how fractalkine is made and released from astrocytes (in comparison to other cells) will help us to better understand its function in the healthy brain and whether it plays a beneficial or harmful role in brain diseases.