Panax ginseng C.A. Meyer (P. ginseng; common name Korean ginseng) is one of the most popular herbal medicines in Korea and Asian countries. P. ginseng is very well known as a potential 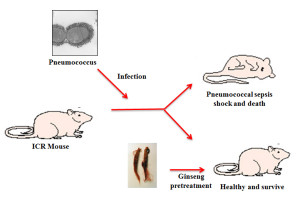 immune-modulator on various cancer diseases. Morever, it also have protective function on cardiovascular and Alzheimer’s diseases as well as stress, and helps to improve memory and work efficiency. However, information on the role of P. ginseng on bacterial infection particularly lethal community-associated S. pneumoniae (pneumococcus) infection has been limited. Pneumococcus is one of the major causes of morbidity and mortality in the world (> 1 million annually) which causes severe pneumococcal diseases such as pneumonia, sepsis, and meningitis. Common cold could lead to pneumonia, and pneumonia precedes sepsis insinuatingly resulting in septic shock and death. Moreover, more than 50% of sepsis cases are caused by pneumococcus, and hospital mortality related to sepsis comprises 52% of all hospital deaths. Thus any preventive measures are pivotal during the high season of common cold. Here we found P. ginseng could protect the host from pneumococcal sepsis by modulating immune system. 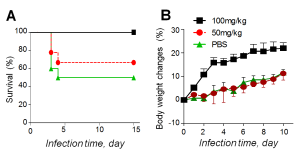 Protection of mice from morbidity and mortality of pneumococcal sepsis by Korean red ginseng (KRG). 100 mg/Kg KRG administration for 15 days (square) shows highest survival (A) as well as the highest body weight gain (B) during infection whereas the PBS control (green triangle)showed high death rate and body weight decrease. KRG-treated mice were infected with 1.5×106 CFU of virulent pneumococci (serotype 2, D39). KRG was dissolved in phosphate buffered saline (PBS), which was used as a negative control

Upon pneumococcal infection, innate immune system is activated and immune cells comprising leukocytes are recruited to the infection site, and cytokine production is stimulated. Although the inflammatory response is crucial against the infection, inflammation could also lead to tissue damage, septic shock, and acute lung injury

Our study recently published in Phytomedicine has shown that P. ginseng has a protective effect on pneumococcal sepsis induced by several serotypes of pneumocci in mouse. We found that 100 mg/kg (the human equivalent dose= 8.01 mg/kg) of Korean red ginseng extract (KRG) provided serotype-independent protection from pneumococcal sepsis. We also found that KRG reduced inflammation in both in vitro and in vivo, and enhanced macrophage survival which would be beneficial for immune function to remove pneumococci. The KRG dose used in this experiment is acceptable for clinical trials, thus P. ginseng could be developed as a highly effective agent for prevention and treatment of pneumococcal diseases and sepsis.