How plant virus hides from the host cellular degradation machinery

The main goal of obligatory viral parasites is to create the perfect environment for its multiplication. Therefore, the first step is to avoid degradation by the host cellular degradation. Tomato yellow leaf curl virus (TYLCV) is not an exception. TYLCV is a single stranded DNA begomovirus transmitted to tomato and other crops by the whitefly Bemisia tabaci. The genome of TYLCV encodes only six proteins with multiple functions. In plant cells and in the insect body, viral particles and viral proteins are considered as intruders by the host protection machinery. We have analyzed the capacity of the tomato plant and of the whitefly insect vector to degrade the six TYLCV proteins. 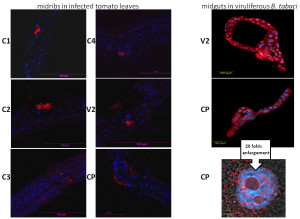 Fig. 1. TYLCV protein aggregates in infected tomatoes and viruliferous B. tabaci. Visualization under the fluorescence microscope of the six TYLCV proteins in cross sections of midribs of infected tomato leaves and in midguts of viruliferous B. tabaci using primary antibodies and a Cy3-labeled secondary antibody (red). Nuclei were DAPI stained (blue). Viral proteins localized in nuclei appear as pink. Bar: 100 um.

Ultracentrifuge fractionation of tomato and whitefly proteins indicated that the highest proteolytic activity was associated with fractions containing soluble proteins, and was much lesser in large protein aggregates; a significant decrease of TYLCV proteolysis was detected in intermediate-sized aggregates. All the six TYLCV proteins were differently targeted by the cytoplasmic and nuclear degradation machineries (proteases, ubiquitin 26S proteasome, autophagy). Therefore we hypothesized that TYLCV could confront host degradation by sheltering in small/midsized aggregates, where viral proteins are less exposed to proteolysis. Indeed, TYLCV proteins were detected specifically in such intermediate-sized aggregates at the beginning of infection in plants and during an acquisition by the whitefly vector (Fig. 1).

As infection progresses, intermediate-sized, mostly cytoplasmic protein aggregates, are converted to large nuclear inclusion bodies containing infectious virions, which function as viral factories. The appearance of large aggregates is a feature of a successful TYLCV invasion in plants. The TYLCV coat protein (CP) was shown to be prone to protease digestion and 26S proteasome degradation in viral factories. Yet, proteolysis in large aggregates could be required for the homeostasis absolutely necessary during intensive viral replication and assembly of virions. Ubiquitin and 26S subunits were shown to be associated with mammalian virus factories. The presence of the same proteasome elements in TYLCV induced large aggregates in infected tomatoes and viruliferous whiteflies points to their recruitment by virus for the regulation of correct folding, maintenance and required proteolysis of viral proteins. 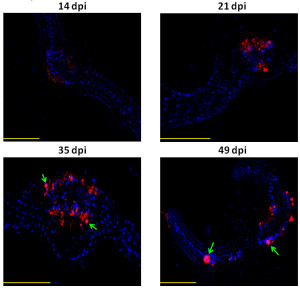 Fig. 2. Co-localization of TYLCV CP with nuclei in cross sections of midribs of tomato leaves during prolonged infection. CP is stained with Cy3 antibody and appears as red; nuclei were DAPI stained and appear as blue. CP localized in nuclei appears as pink (arrows). Bar: 200 um.

Whether sheltering in the specific aggregates is a common phenomenon for plant viruses or, at least, for begomoviruses with the extremely long life cycle is the subject of new investigations.