How plants survive during drought seasons? Polyphenols: the natural antioxidants

The earth has a variety of ecosystems. One of them is the semiarid regions characterized by seasonal rainfalls and long periods of drought. The native plants species of these environments have the ability to survive and maintain their normal parameters during drought periods. One of the mechanisms used by this species to tolerate drought periods is the production of Polyphenols.

What are the polyphenols?… In living cells of plants the oxygen metabolism produces some molecules called Reactive Oxygen Species (ROS). This occurs because the oxygen looses an electron creating a free radical in their chemical structure. This free radical searches for another electron to neutralize the molecule and in consequence, a chain reaction is produced. Low levels of ROS in cells have important roles in signaling and homeostasis, but when an organism is under some kind of stress, such as lack of water, the ROS levels increase dramatically causing toxicity damage to cellular structure by an enhance of the chain reaction known as oxidation. Plants species have the ability to produce some molecules to face the environmental stress and to reduce the high levels of ROS. These molecules are called phenolic compounds or polyphenols. The polyphenols act as antioxidants “scavenging” the ROS, indeed, the polyphenols donate an electron to the ROS which have the free radical, neutralizing them and stopping the chain reaction before the cellular damage occurs. 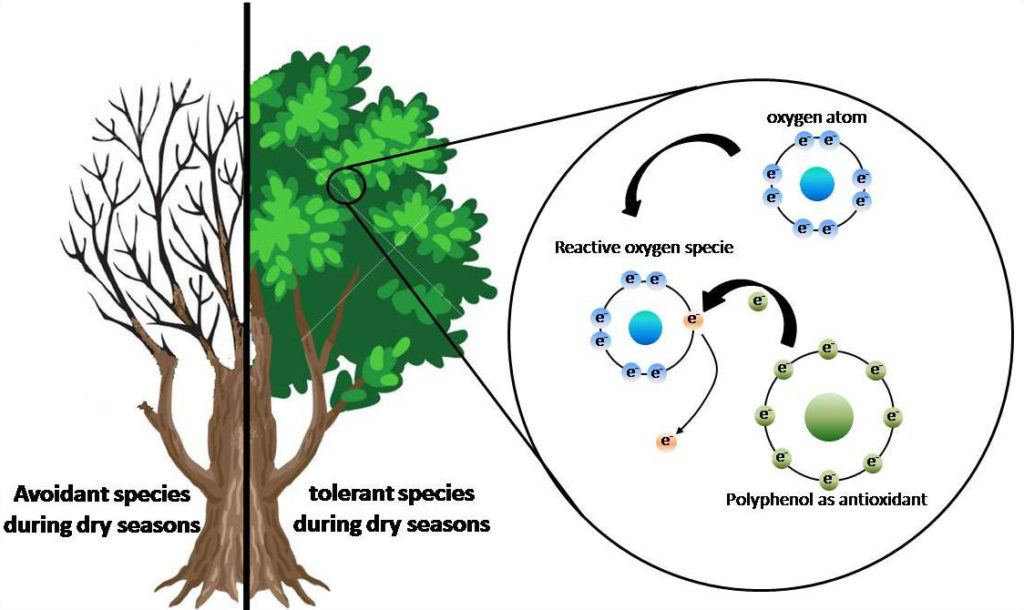 In this study we quantified and identified the polyphenols production of two xerophytic shrubs species of a semiarid region of South America located in Argentina, known as Patagonian shrublands. From an ecological point of view this two species used different mechanism of drought resistance: avoidance and tolerance. The first group are species that loss their leaves during dry seasons and their reproductive stage begin and end during the rainfalls seasons, while the second group are species that survive during dry and rainfalls seasons due to changes in their metabolism and using their energy to produce molecules that will help to maintain alive. We hypothesized that polyphenols are produced by tolerant species to maintain their homeostasis during the drought periods. First, our research showed that tolerant species produced large amount of polyphenols compared with the avoidant species and the polyphenols production increased during the dry seasons. Second, the identification of the different polyphenols demonstrated that tolerant species accumulated higher amount of flavonoids (a subgroup of polyphenols with high antioxidant capacity), while the avoidant species accumulated other polyphenolics compounds known as non-flavonoids. Finally, we concluded that the accumulation of polyphenols, especially flavonoids, is an important feature of the xerophytic species and could be used as indicator of drought tolerance.

As a future perspective, the identification of phenolic compounds, such as their extraction from the plant could be useful for human health. Outgoing researches from around the world have shown that plant extracts containing polyphenols, have the ability to reduce the multiplication of tumor cells, and antifungal, antiviral or antibacterial capacity. This is why, it is important to have knowledge about the plants species that can produce large amount of phenolic compounds to use their extracts as natural antioxidants.