One of the main characteristics of a plant life is sessile nature. Plants counter this frailty by evolving intricate and fast signaling system that can help in transferring stimuli at a very high rate. The phytohormone ABA (Abscisic Acid) mediates one of such important signaling systems mainly under stress condition in plants. In the classical ABA signaling pathway, ABA is sensed by some cytosolic receptors, which can then bind and inactivate a particular class of phosphatase. These inactivated phosphatases as a result release the kinases, which in turns get activated self-phosphorylation. The activated kinases now can phosphorylate downstream targets to propagate ABA signaling. These kinases can be classified as ABA regulated kinases and belong to SnRK2 subfamily. In nutshell, the trimeric core of ABA-receptor, protein phosphtase (PP2C type) and SnRK2 are key components of ABA mediated signaling and response pathway. But besides this core pathway there are several Ca2+ mediated kinases that can propagate ABA signaling and do not belong to this typical pathway. Among the Ca2+ mediated kinases, the Ca2+-dependent protein kinases (CDPK) have common targets that indicate that the ABA signaling and Ca2+ signaling converges at certain nodes in the cell. 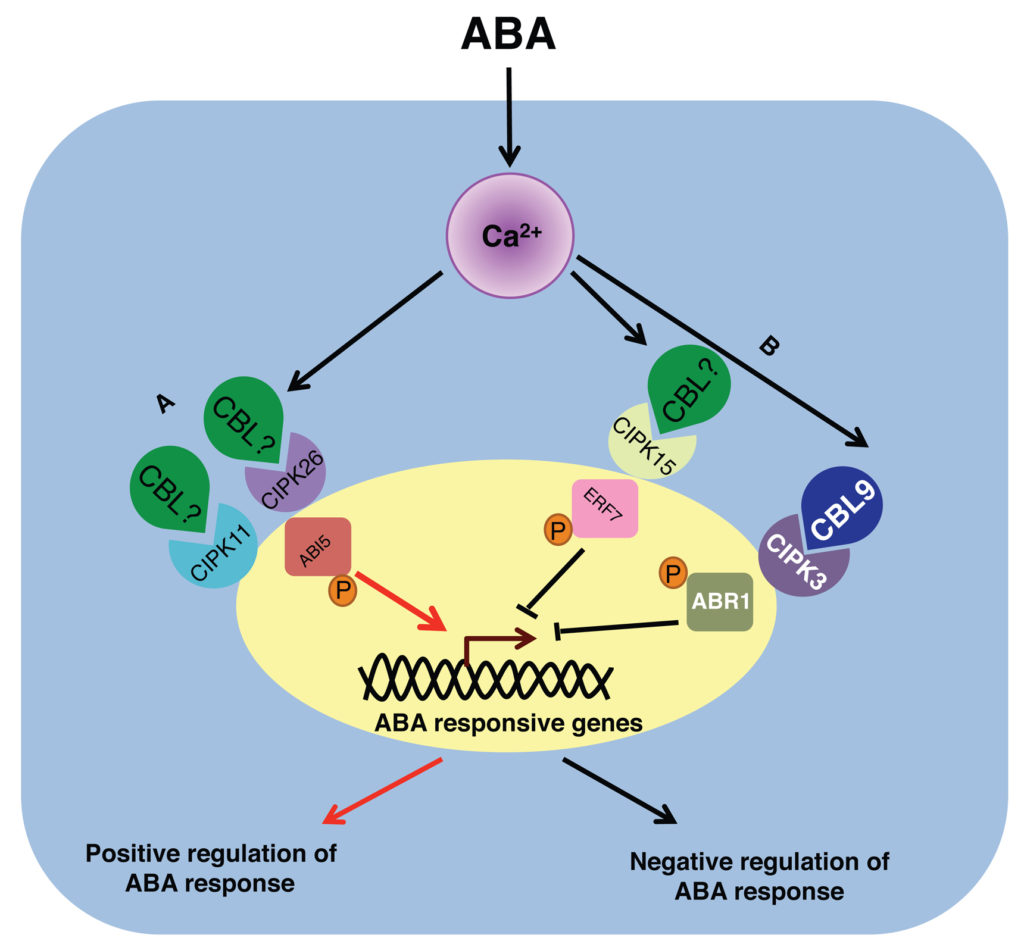 Fig.1. Interplay of CBL-CIPK positive and negative regulators during ABA signaling. ABA iduces Ca2+ signature in the cell. This figure explains a particular scenario involving CBL-CIPK pathway. (A) In this pathway, an unknown CBL recognizes the signature and activates CIPK11 and CIPK26. Both can phosphorylate ABI5. The ABI5 positively regulates the ABA responsive genes. This results in positive regulation of ABA responses. (B) In this scenario, a yet unknown CBL activates CIPK15 and this phosphorylates ERF7. The CBL9 activates CIPK3, which phosphorylates ABR1. Both of these modules can negatively regulate ABA responsive genes and consequently negative regulation of ABA responses. These two events play a balancing role during ABA signaling in plants.

Beside CDPKs, the Calcineurin B-like (CBL) and CBL-interacting protein kinases (CIPK) module are also important part of the Ca2+ mediated signaling machinery taking part in the ABA signaling system. The CBL1/9-CIPK23 can regulate slow anion channel 1 (SLAC1), a very important target in ABA signaling during stomata regulation. Similarly many protein phosphatase 2C (PP2Cs) were shown to dephosphorylate a few CIPKs. The ABA insensitive five (ABI5) is a transcription factor that is controlled by two CIPKs (CIPK11 and CIPK26). These CIPKs by phosphorylating ABI5 positively propagate ABA signaling effects. The CIPK15 and ethylene response factor 7 (ERF7) on the other hand interact to negatively regulate the ABA signaling.

The CBL9-CIPK3 module like their other family members had also been implicated in regulating ABA signaling. However the downstream target of the module was not known. Recent work published in the journal of Plant Science from Pandey Laboratory investigated the downstream target of the CBL9-CIPK3 module. Thye have identified Abscisic acid repressor 1(ABR1) as the target of this module. ABR1 is an AP2-domain containing transcription factor that had been previously identified as a repressor of ABA response. The current work showed that the CIPK3 protein interacts with ABR1 and phosphorylates it. The interaction was proven to take place in the nucleus of plant cell. CBL9 also plays a crucial role in this phosphorylation. It can enhance the level of CIPK3 mediated phosphorylation of ABR1. The activated ABR1 can then control the downstream components like ABA insensitive 4 (ABI4) by repressing its activity and thus negatively regulating ABA responses. Besides playing an active role during seedling development, ABR1 also plays a significant role during the adult stages of plant development. To investigate this, the knockout mutant plants of ABR1 were subjected to drought stress by withholding water. These mutant plants were able to survive stress better than the wild type plants. To parallely test another scenario; plants which express higher levels of ABR1 (by ectopic expression) were also subjected to drought stress and these plants consequently survived lesser than the wild type.

This study put forward another important pathway that showed how plant balances its signaling system during times of stress. The CIPK11 and CIPK26 phosphorylate ABI5 during stress to propagate ABA signaling in the cell. To counter this and probably to give the plants enough time to perform its other activities, the CIPK15-ERF7 and the CBL9-CIPK3-ABR1 pathways negatively regulate the ABA signaling. The two different components for the same signaling system probably act as a backup for plants (Fig. 1).