The mitochondrial F1FO-ATPase is well known to play the main role in synthesizing most of ATP, thus providing energy to living cells under aerobic conditions. However the enzyme complex can also  work in reverse and split ATP into ADP and inorganic phosphate, to regenerate the electrochemical gradient between the mitochondrial matrix and the intermembrane space required by mitochondrial functions. ATP dissipation is often related to mitochondrial dysfunctions and, since the mitochondrion is the cell powerhouse, if the mitochondrion does not work properly, energy loss and cell death are a logical consequence. So, the same complex has both the vital role of producing ATP, hence the name of “enzyme of life”, and the less attractive but not less important task to lead the cell to death. 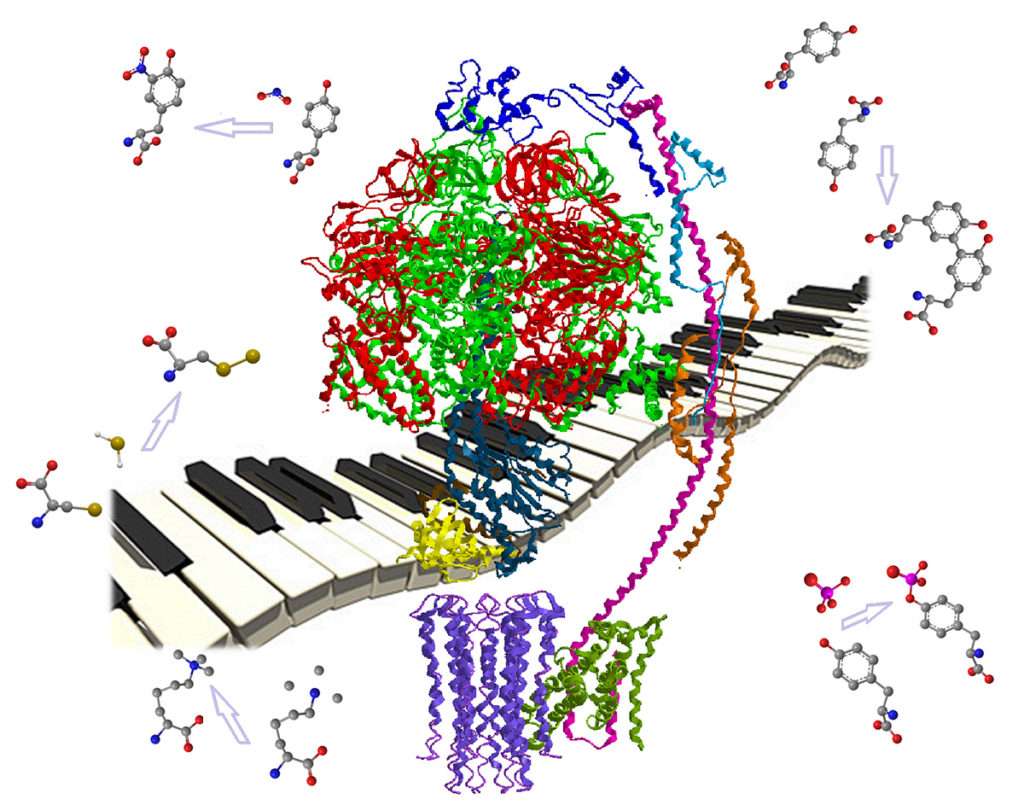 Due to its duality, the F1FO-ATPase has been recently discovered as an intriguing biochemical target to fight pathogens resistant to traditional therapies and also diseases linked to mitochondrial dysfunctions. This potentiality is sustained by the observation that its function can be addressed by chemical changes in the protein, more precisely targeting selected and especially susceptive amino acids, a mechanism widely exploited in nature to manipulate proteins and their function and also to confer to proteins their final task. From a literature overview, it is clear that a variety of post-translational modifications (PTMs), namely chemical changes in the side chains of selected aminoacids made after protein synthesis, have been found both on the catalytic sector F1 and on the transmembrane sector FO. Briefly, PTMs represent the chemical tool to modulate the enzyme activity in response to different stimuli, name to adapt and connect the enzyme activity to the environmental conditions. Some PTMs are required to ensure the enzyme catalysis or, conversely, to inactivate the enzyme function. Each covalent modification of the F1FO-ATPase, which occurs in response to local changes, is the result of a selective molecular mechanism which, by translating a chemical modification into a biochemical effect, guarantees the enzyme tuning under changing conditions. Chemical changes are typically produced by chemicals, namely drugs or even natural compounds occurring in the enzyme microenvironment. These modifications, which span from the addition of groups of atoms, for instance phosphate group bearing negative charges or methyl group which on the contrary is apolar, to the alteration of the redox state of thiol groups of the aminoacid cysteine, often modify the local electric properties and the shape of the protein, and its relationship with neighboring proteins, and consequently, as a cascade, the whole function of the multisubunit enzyme complex. From the overview of the known PTMs of aminoacid side chains of the F1FO-ATPase, taking into account the most recent research advances, an intriguing perspective emerges. Indeed, chemical changes on the F1FO-ATPase, selectively produced by organic compounds or even small inorganic molecules available in the cell microenvironment, can also be exploited to modulate the enzyme activity. The F1FO-ATPase is so important for the cell that its modulation is always essential. To provide some practical examples in pharmacology, some PTMs may improve the enzyme functionality compromised by mutations in mitochondrial diseases, address cell fate to death to counteract malignant cell proliferation or antibiotic-resistant bacteria, make the enzyme more prone or even more resistant to drugs, and so on. To sum up, even if a great deal of work is still to be done to deepen and clarify the molecular mechanisms involved, chemical modifications produced on the F1FO-ATPase may constitute innovative therapeutic strategies. The hope is that in the next future F1FO-ATPase targeted therapies, by directly counteracting the molecular defect, may help to treat diseases which at present are only fought by symptomatic therapies.