Cisplatin (CDDP) is a highly effective chemotherapeutic agent against a variety of solid tumors including head and neck, lungs, ovary, bladder and testicles, however, it presents severe side-effects that affect kidney function, nervous system and hearing. 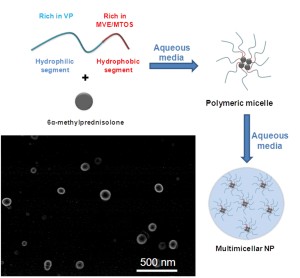 There is substantial variability in susceptibility to the ototoxic effects of CDDP. Hearing impairment begins in the high frequencies and progresses to midrange. The incidence and severity of hearing loss after CDDP treatment varies considerably, and 40–80% of patients develop an elevated hearing threshold following CDDP treatment being a limiting factor in antineoplasic treatments.

The molecular mechanism of CDDP ototoxicity has not been fully elucidated; however oxidative stress plays a key role in it. Up-regulation of endogenous protective molecules is not enough to settle CDDP-induced oxidative stress being necessary the systemic or local administration of protective drugs such as caspase inhibitors, antioxidants or corticoids.

The systemic administration of drugs is related to variable penetration into the inner ear and undesired side effects. Corticoids such as hydrocortisone, 6α-methylprednisolone, and dexamethasone showed poor delivery to inner ear, and the systemic administration of higher doses would be necessary to achieve otoprotective therapeutic concentrations. However, high concentrations of these corticoids are accompanied by severe side-effects that need to be avoided, such as hyperglycemia, hypertension, hypokalemia, peptic ulcer disease, osteoporosis and immunosuppression. 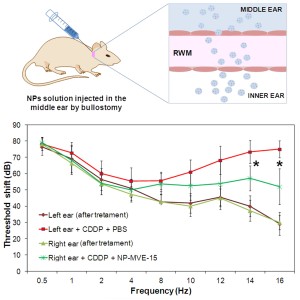 Local administration by intratympanic treatment presents several advantages if compared with systemic administration. It is possible to reach higher concentrations of drug in the inner ear, the target is locally treated minimizing the drug side effects, and CDDP antitumor activity is not affected. However, it is not patient friendly. The main challenge in intratympanic treatments is still to achieve sufficient concentration of drug in contact with the sensory auditory cells as any drug delivered through the middle ear has to cross the three-layered round window membrane (RWM), diffuse through the labyrinth fluids and finally enter the inner ear cells.

In the last years, nanoparticles (NPs) have emerged as promising vehicles to transport drugs to specific tissues or even a particular cell or organelle. The aim of this work was the development of a new therapy against CDDP-induced ototoxicity based on 6a-methylprednisolone-loaded NPs. The NPs were designed not only to be MP nanocarriers, but also to be active due to the incorporation of derivatives of a-tocopherol (vitamin E) in its structure. Vitamin E is a very well-known antioxidant that protects the cochlea from CDDP damage and prevents hearing loss.

Amphiphilic macromolecules (with a hydrophilic part and a hydrophobic part based on Vitamin E) were obtained and formed nanoparticles of adequate dimensions. The NPs were able to encapsulate and transport 6α-methylprednisolone through the round window to the sensory auditory cells. 6α-methylprednisolone was locally released and partially avoided hearing-loss.