How to reduce salt in bread by fooling taste

Reducing sodium dietary intake is a global priority in public health. The World Health Organization (WHO) recommends sodium intake for adults to be 2 g/day maximum, equivalent to 5 g/day of cooking salt (sodium chloride, NaCl), whereas the estimated salt intake in Europe ranges from 7 to 13 g per day. For this reason, in the last decade, the food industry has undertaken actions to reduce salt levels in many products. Bread is a significant source of dietary sodium in Western countries. Therefore, reducing salt content in bread would have a major impact on global health and this strategy is being followed in many countries. 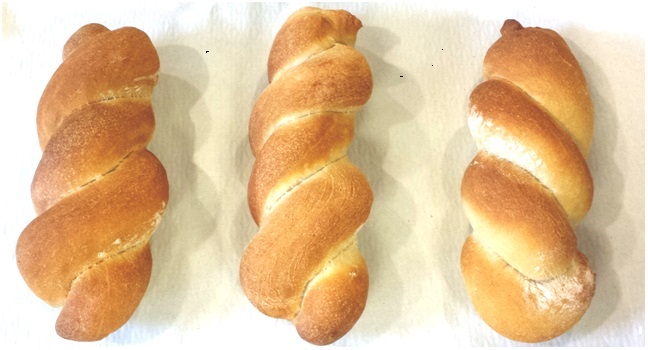 Salt reduction, however, can affect food sensory properties. For this reason, we decided to study the efficacy of two sodium reduction approaches in preserving the sensory profile of yeasted wheat bread and consumer liking. In the first approach, a reduced-sodium salt substitute named Pansalt® (formulated with sodium, potassium, and magnesium salts and a little of lysine to reduce bitter and metallic aftertaste due to potassium) was employed in place of normal salt (NaCl only) to manufacture bread at 1.5% salt concentration. In the second approach, a reduced-salt bread with a heterogeneous distribution of normal salt (1% NaCl) was manufactured by twisting two strings of dough, one containing 2% salt and the other one without any salt (Fig. 1). We believed that the taste contrast culd deceive perception of salty taste. Both reformulated breads were compared with bread containing uniformly distributed 1.5% (Italian average) and 1.0% (reduced) salt concentration. Sensory evaluation was performed by a group of highly trained panellists.

The use of 1.5% Pansalt® did not preserve the intensity of salty taste of the 1.5% NaCl bread. Saltiness was rather comparable to that of the 1% NaCl bread. However, the overall flavour intensity was like that of 1.5% NaCl bread and no bitter and metallic notes were perceived.

In the bread with heterogeneous 1% salt distribution, both the salty taste and overall flavour were not significantly different from the 1.5% NaCl bread.

Furthermore, both reformulated breads preserved the olfactory and consistency characteristics of the NaCl 1.5% bread, except for the toasted odour, which was lower in Pansalt 1.5% bread. Chemical analysis supported these results, showing that substitution of 1.5% NaCl with 1.5% Pansalt® reduced the formation of odorant volatile substances during baking.

The heterogeneous salt distribution enhanced saltiness perception with respect to bread containing the same amount of NaCl (1%) uniformly distributed in the bread matrix. A 33% salt reduction (from 1.5% to 1%) was achieved with no reduction in salty taste or other sensory changes.

In addition, hedonic evaluations were conducted with 203 adult bread consumers balanced by gender and age groups, who answered for overall liking, perceived salt intensity and intention to purchase. Interestingly, groups of consumers differing in their perception and response to salt reduction approaches were identified. Some consumers were more positive towards bread with added Pansalt®. These may have experienced an enhanced overall impression of flavour, rather than an increase of salty taste. For another group, the taste contrast approach was most effective. Hence, we conclude that different approaches may be implemented to reduce salt in bread for different target groups. However, for 42% of consumers both approaches were ineffective.

These results may provide guidance to sodium reduction in bread. We must also consider that this study was conducted with Italian consumers recruited in a limited geographical area, which may not be representative of other populations. Food habits differences among cultures might influence consumer perception or preference, and this could be verified through replicated studies in different cultural environments.