How to spot a sick cell?

Mass spectrometry (MS) is a technique used to measure the mass of molecules. Chemists extensively use this method to confirm that they have made the right molecule by comparing the mass of the actual product with the expected mass and make sure that they are the same. This technique has evolved recently into a stethoscope, not the one that the doctor uses on a patient’s chest but instead a stethoscope that can spot a sick cell (such as cancer cell). 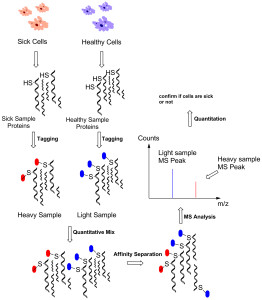 The cells under investigation are smashed into the major components. Scientists call this lyophilizing the cell into components proteins. The proteins are then tagged with certain molecules that have a certain mass. For example, heavy tags are used for cells under investigation and light tags are used for healthy cells. The labelled samples are analysed by mass spectrometry after being mixed and fractionated. The peaks in the mass spectra reveal the ratio of the two different mass tag variants. The ratio is then used to identify protein or peptide relative abundances. A sick cell will have far more or far less from certain protein. This process is called Mass spectrometry based proteomics.

MS based proteomics analysis is becoming an indispensable tool, complementing molecular and cellular biology research. It can be useful to determine how much of the protein is present in the sample, either as an absolute value or relatively with respect to the amount of the same protein in a different sample. In this context, quantitative proteomics aims to identify specific changes between control samples and specific experimental conditions, often focusing on a particular subset of proteins, so-called expression proteomics. Characterisation of the dynamic proteomic changes, associated with different biological conditions such as diseases, helps in identifying proteins as biomarkers and therapeutic targets. These proteins vary in abundance between sick and healthy states and in rare cases they may be completely absence or present in one of the states. It is therefore crucial to find sensitive, specific and accurate analytical methods to measure the changes.