How we can curb deaths from heroin use

Evidence from many countries shows an alarmingly high death rate amongst former prisoners with histories of heroin addiction in the two weeks following their prison release. A heroin overdose is the most common cause of death in such cases. During their prison sentence they will have lost their tolerance for heroin. Tolerance is the mechanism by which our bodies adapt to a drug so that increasingly higher doses are needed to achieve desired effects. Consequently, a dose which was normal for them before their sentence is now an overdose. When loss of tolerance is combined with a desire to ‘make up for lost time’, the result is lethal. 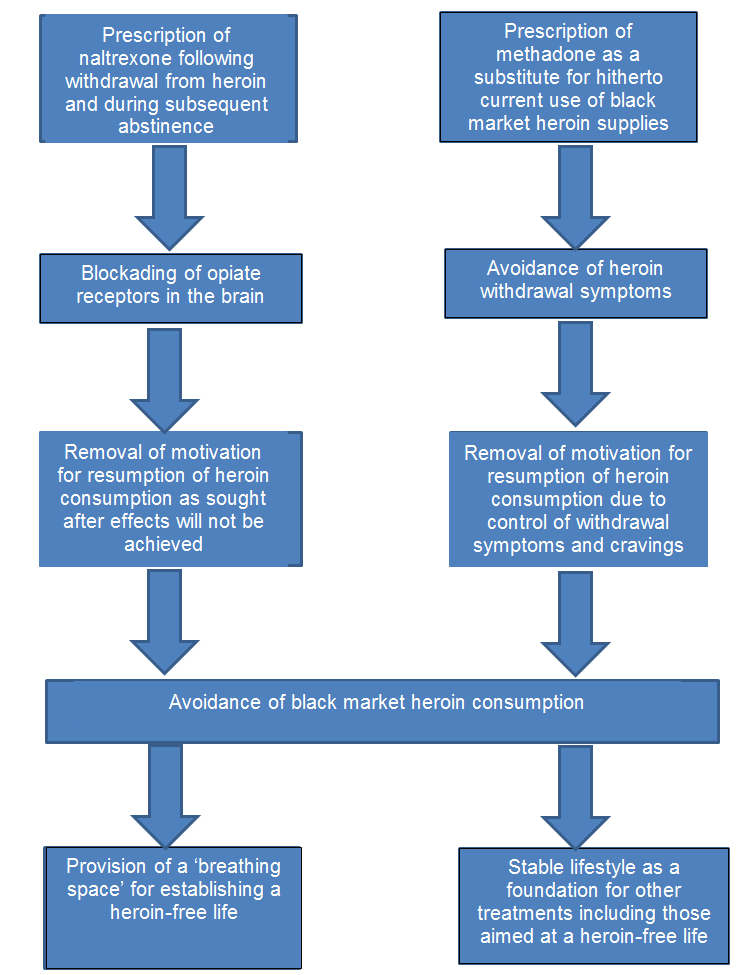 Following the withdrawal stage from heroin, avoiding a return to heroin use can be supported by prescribing a drug which blockades the receptors in the brain to which molecules of heroin bind. When such a drug does not produce the same effects as either heroin, or the naturally occurring brain substances which normally bind to these receptors, the drug is called an antagonist. Naltrexone is one such drug. The effect of this blockade is that heroin is unable to produce the results sought by the user, so that motivation to resume consumption is removed. This provides a breathing space for the establishment of a heroin-free life. This treatment strategy is different from prescribing a drug such as methadone, which acts on the receptors in a similar way to heroin, to provide a safe substitute to black market supplies. This is sometimes called opiate substitution treatment (OST). Figure 1 illustrates these two treatment strategies.

This NHS funded study, led by researchers from Edge Hill University in conjunction with NHS and prison service colleagues, aimed to establish if prisoners would accept naltrexone injections, and what circumstances might encourage or discourage acceptance. Such evidence would be important in securing a change to the licencing regulations for naltrexone. Of the 61 prisoners interviewed, only 6 said they would not consider receiving naltrexone injections. Approximately 58% reported an unequivocal ‘yes’ to such injections if they were made available. Those serving sentences for theft to support their heroin use indicated a stronger likelihood of accepting injections than those sentenced for drug dealing offences or violent offences. In these latter two cases it is likely that greater engagement in drug related crime and alcohol dependence, respectively, was related to a lower readiness for a drug-free life after release.  Amongst prisoners receiving high doses of methadone, refusal and wariness of naltrexone injections was particularly high. Because OST is used to support the maintenance of lifestyle stability and avoidance of illegal heroin supplies, high methadone doses generally indicate a lack of readiness to attempt a heroin-free life.

There are two important conclusions from this study. Subject to changes in licencing regulations for naltrexone, prescribed injections of it may help to reduce the death rate amongst newly released prisoners with heroin addiction histories. The second conclusion is that this will only be likely to work with prisoners who are ready to try for a heroin-free life. OST remains a treatment priority until that point is reached.