Amyotrophic lateral sclerosis (ALS) is a neurodegenerative disease that damages motor neurons. As the disease progresses, patients gradually loose exercise capacity. Finally, they die due to the lack of breathability. No effective therapy was found for ALS yet. Non-invasive diagnose of amyotrophic lateral sclerosis is important. Early diagnose of ALS can help patients to live longer. 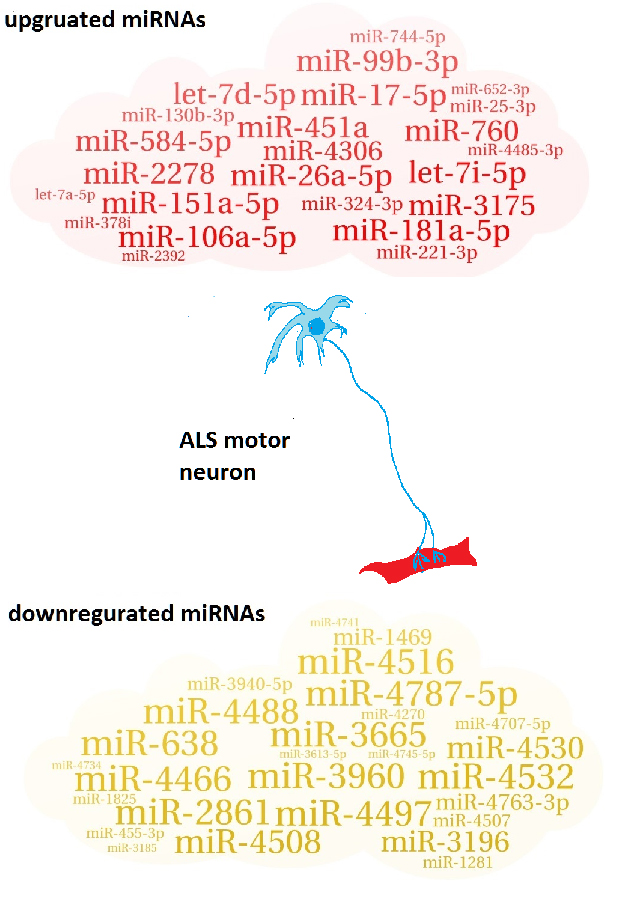 Blood microRNAs are promising candidate of biomarker. Dysregulated miRNAs might be useful biomarkers of amyotrophic lateral sclerosis. miRNA is RNA that does not encode protein. Individual miRNAs affect translation of more than hundreds of target mRNAs to proteins. miRNAs are known to contribute to various biological processes, e.g., development and differentiation as well as various diseases. In order to identify dysregulated miRNAs, we applied recently proposed method, principal component analysis based unsupervised feature extraction, to serum miRNAs. This method can identify critical miRNAs using only expression without the knowledge about the group of samples. Human subjects include six familial ALS patients who have ALS relatives, 18 sporadic ALS patients who do not have ALS relatives, 12 amyotrophic lateral sclerosis mutation carriers without symptom and 17 healthy controls. With the proposed method, we identify 107 miRNAs that include 27 miRNAs downregulated in ALS patients and 24 miRNAs downregulated in ALS patients (Fig. 1). These 51 miRNAs are used to discriminate familial ALS patients from healthy controls and mutation carriers without symptom, although sporadic ALS patients are not discriminated well (Fig. 2). The plane is spanned by two sets of linear combinations of expression of these miRNAs. This method is called as linear discriminant analysis. 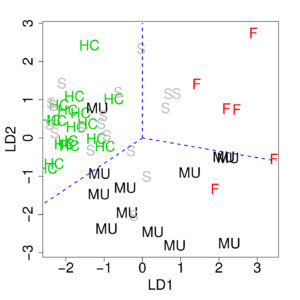 We also evaluated what kind of mRNAs are targeted by these 51 miRNAs used for the discrimination of amyotrophic lateral sclerosis. Various pathways, which is a set of genes that concertedly contribute to biological processes, are identified. Some of them are reported to be related to amyotrophic lateral sclerosis. For example, “Extracellular matrix(ECM)-receptor interaction” as well as “Focal adhesion” were enriched in upregulated differentially expressed gene in ALS patients. mRNAs corresponding to these genes are targeted 27 downregulated miRNAs identified in this study. Because miRNAs downregulate to target mRNAs, the fact that genes upregulated in ALS patients target unregulated mRNAs in ALS patients is reasonable. In addition to this, “ECM-receptor interaction”, “adherens junction”, “Hippo signaling pathway”, “TGF-β signaling pathway”, “Ubiquitin-mediated proteolysis”, “Protein processing in endoplasmic reticulum”, and “AMPK signaling pathway” are the pathways that are targeted by 24 down regulated miRNAs and are reported to be related to ALS.  In total, we identified 19 pathways where mRNAs that belong to these 19 pathways are targeted by 27 downregulated miRNAs. 15 out of 19 pathways are also targeted by 24 miRNAs that are upregulated in ALS patients. This suggests that miRNAs identified in this study not only can act as biomarker that can discriminate ALS patients from healthy control but also can play critical roles in ALS. We have not yet well understood the genetic background of ALS. Because miRNAs identified in this study can act as both biomarkers and factors that progress this disease, these miRNAs can be a start point to identify new therapy target of ALS.