HspB1, a polypeptide sensor whose structure reacts to changes in the physiology and environment of the cell

The small heat shock protein HspB1 acts as an ATP-independent chaperone helping cells to cope with stress-induced aberrantly folded polypeptides. Other interesting properties of HspB1 are its constitutive expression in many unstressed human cells and its up regulated level in pathologies, such as cancers where it has a pro-cancerous activity. A large number of publications have reported that constitutively expressed HspB1 plays fundamental, but apparently unrelated, roles in many cellular processes. These pleiotropic activities are now explained by the fact that constitutive HspB1 can recognize and interact with many client polypeptides and modify their activity and/or half-life. 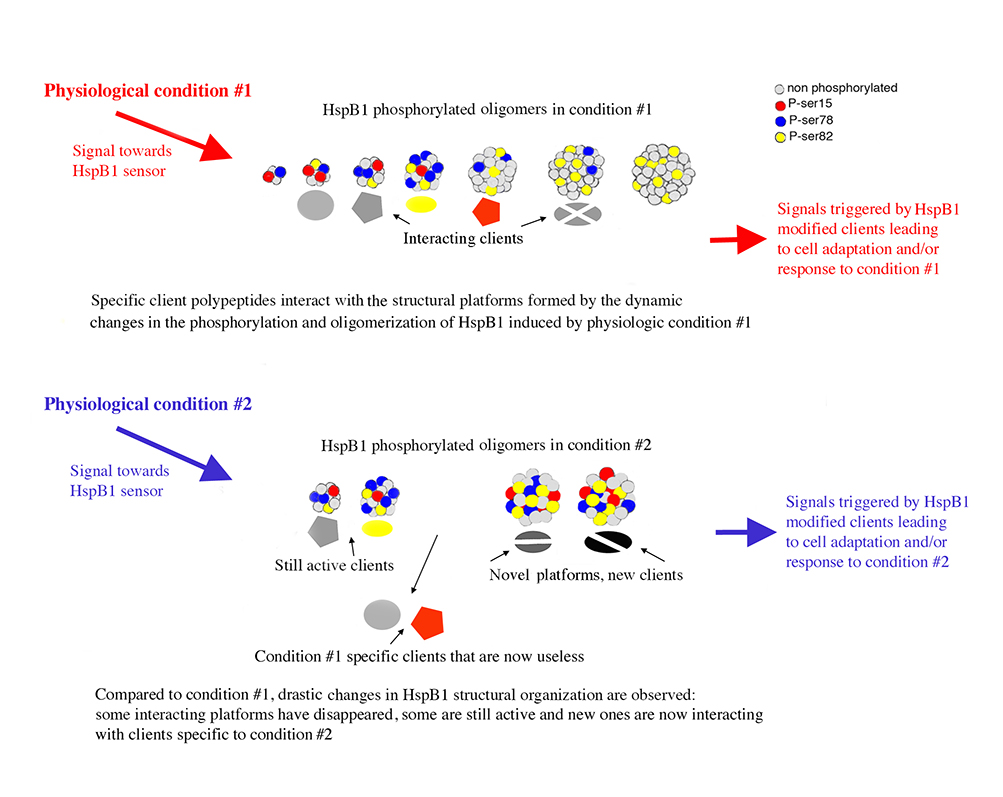 The major question was therefore to define how HspB1 interacts and modifies client polypeptides in defined cellular conditions. I have proposed that, through dynamic changes in its oligomerization and phosphorylation, platforms are created which recognize specific client polypeptides. For example, my lab showed that, in the same cells, particular clients partners interact with oligomers of different size and phosphorylation. Hence, my own studies and data from the literature have been revisited to enumerate the changes in HspB1 oligomerization and phosphorylation that are known to occur in response to environmental challenges or modifications in the physiology of cells. The considered studies were performed in human tissue culture cells and tumor tissues that constitutively express high levels of HspB1. The review paper presented here deals with this endeavor.

In growing human cells, HspB1 is in the form of three oligomeric populations with different native sizes (<150 kDa, 150-400 kDa, >400 kDa) and is phosphorylated at the level of three serine sites (15, 78 and 82, N-terminal region). Of interest, the medium-sized oligomers contain only phosphorylated serine 78 while the <150 kDa oligomers contain phosphoserine 15 together with some phosphoserine 82 also detected in the larger oligomers. This particular structural organization of HspB1 is rapidly modified when cells are starved-refed, confluent or committed to differentiate. Other changes were observed in cells exposed to apoptotic inducers or to stress induced by either heat shock or oxidative/reducing conditions. The conclusion is that these dynamic changes are highly specific to the cell conditions. Moreover, in reversible conditions (not too drastic heat shock, starvation), the changes are transient and HspB1 can regain its original structural organization.  The upstream signal mechanisms triggering HspB1 conformational changes are not known.  In that regard, analysis of confluent cells and tissues reveals that HspB1 oligomerization can occur independently of phosphorylation, a phenomen which illustrates that the structural behavior of HspB1 can be different whether it is express in isolated cells or tissues, hence suggesting a signal role played by the cytoskeleton. Concerning the phosphorylation/oligomerization relationship, it looks far more complex than what had been claimed in an early dogma saying that “HspB1 phosphorylation leads to the formation of small oligomers“. Indeed, several examples exist were phosphorylation and oligomerization are uncoupled, such as in starved cells where HspB1 dephosphorylation is concomitant with the formation of small oligomers.

HspB1 dynamic structural organization appears therefore to act as a molecular sensor that responds to modifications of the cellular physiology. By changing its oligomerization and phosphorylation structural platforms are created that recognize, interact and modify diverse client repertoires. Subsequently, HspB1 modified clients bring signals to the cell machinery to adapt or respond to physiological changes.

Mammalian HspB1 (Hsp27) is a molecular sensor linked to the physiology and environment of the cell.
Arrigo AP
Cell Stress Chaperones. 2017 Jul