Scientists at British American Tobacco and MatTek Corporation used a unique combination of tests to investigate the potential adverse effects of e-cigarette vapour on airway tissue compared with cigarette smoke. ‘By employing a combination of a smoking robot and a lab-based test using respiratory tissue, it was possible to demonstrate the ability to induce and measure aerosol irritancy and to show that the different e-cigarette aerosols used in this study have no cytotoxic effect on human airway tissue,’ says spokesperson Dr Marina Murphy.

This new methodology could be used to help develop product standards for these kinds of products in the future.

E-cigarette vapour can contain nicotine, humectants, flavourings and thermal degradation products, so it is important to understand the potential impact on biological systems. Until now, there have been no aerosol studies of potential adverse effects of e-cigarette vapour on in vitro models that so closely mimic the structure, function and exposure of normal human airway tissue. 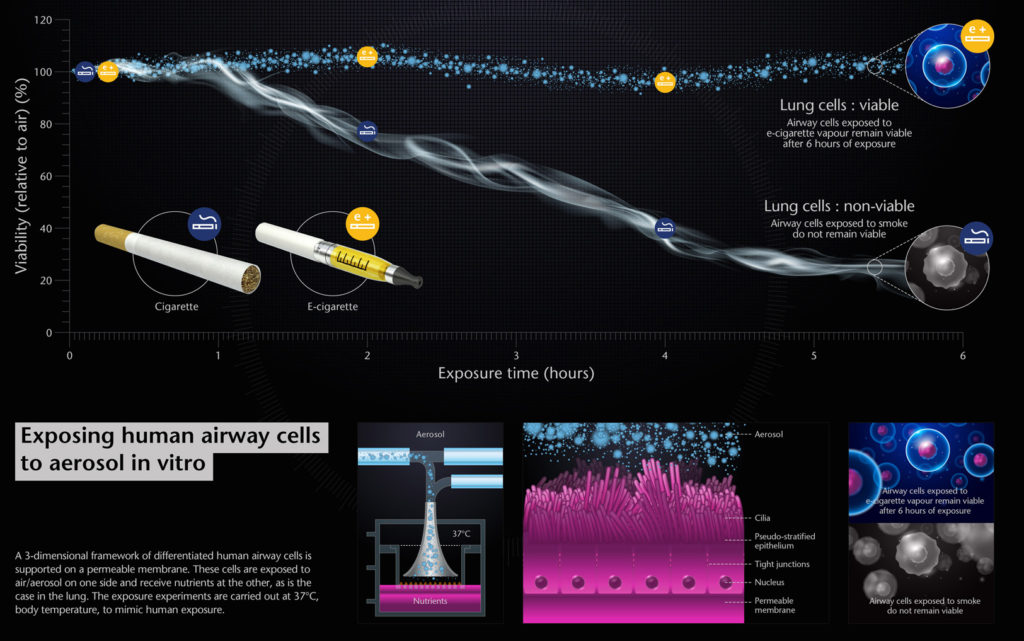 The researchers combined a commercially available 3D model of respiratory epithelial tissue and the popular VITROCELL smoking robot, an aerosol exposure system, to assess the irritant potential of e-cigarette vapour from two commercially available e-cigarettes on human airway tissue. The results show that, despite hours of aggressive and continuous exposure, the impact of the e-cigarette vapour on the airway tissue is similar to that of air. Furthermore, the study represents an initial move towards socialising and debating potential industrial guidelines.

The airway tissue model – EpiAirway – comprises human tracheal/bronchial epithelial cells that have been cultured to form differentiated layers resembling epithelial tissue of the respiratory tract. The VITROCELL system mimics the exposure when humans inhale by delivering emissions from cigarettes or e-cigarettes or just air to the EpiAirway tissues.

The researchers first tested the biological system with known irritants applied in liquid form. Then they exposed EpiAirway tissues to cigarette smoke or aerosol generated from  two types of commercial e-cigarettes for up to six hours. During that time, cell viability was measured every hour using an established colorimetric test. The amount of particulate mass deposited on the cells’ surface was also quantified (using dosimetry tools) to prove that smoke or vapour had reached the tissue throughout exposure. The longer the time the cells were exposed, the bigger the dose they received in an incremental manner.

‘Currently there are no standards concerning the in vitro testing of e-cigarette aerosols,’ said Marina Trani, Head of R&D for British American Tobacco’s next generation nicotine products. But, she adds, ‘our protocol could prove very useful in helping the process by which these guidelines might progress.’

This study shows that, in this human airway tissue model, cytotoxicity is unaffected by aerosols from two different types of e-cigarette, but further studies will be needed to compare the  effects of other different commercially available products, formats and formulations.