The growth of the world’s population is presenting a major challenge to agricultural industries to produce enough food for all people.  We have been carrying out research which could provide a component of the needed food supply in future years.  When crosses are made between varieties of some crop species, the hybrid offspring have better yields than their parents.  This is called hybrid vigour, or heterosis. 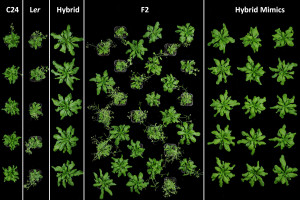 Hybrids have been widely used in agriculture to produce high yields in major food crops such as maize, rice and canola.  A key characteristic of hybrids is that the first generation plants are highly uniform with a higher biomass than the parents and in the reproductive stage they produce greater yields of seed and grain.  Another characteristic of the hybrids is that these high performance features occur only in the first generation and are not repeated in the next and subsequent generations.  This results in farmers having to purchase hybrid seed for every planting season.  Fixation of the superior phenotype and yields of biomass and grain of F1 hybrids could make a very significant contribution to future food production.
To meet this challenge we explored a new breeding strategy using the laboratory plant Arabidopsis thaliana.  In crosses between two ecotypes, C24 and Landsberg erecta (Ler), the F1 hybrids had a uniform phenotype with a substantial level of hybrid vigour, both in plant size and seed yield.  In contrast, we found the F2 population were heterogeneous in biomass morphology and in flowering time.  By choosing the largest plants in the F2 population, which were similar to the morphology of the F1 hybrid, we carried out a program of recurrent selection based around this plant morphology and were able to produce plants with F1-like properties by the F5-F6 generation.  These plants were pure breeding for the parameters of increased biomass and seed yield.  We called these pure breeding lines with the fixed properties of hybrid vigour, Hybrid Mimics, because although no longer hybrids, they had the characteristics of large biomass and higher yields which were stabilized over subsequent generations (Fig.1).

The pure breeding Hybrid Mimics could be useful hybrid equivalents for crops where the construction of a hybrid seed production system has not been possible; this is true for example in high protein grain legumes.  The value of Hybrid Mimics for farmers is that they don’t have to purchase new hybrid seeds for each generation.

We are encouraged by the results in our Arabidopsis system and we are now exploring the development of Hybrid Mimics in the crop species canola and lentils.  Production of Hybrid Mimics with high yield could be valuable in breeding varieties with desirable traits such as high efficiency of water usage, strong and deep root systems, drought and stress resistances, pathogen resistance and lodging resistance.

Application of the Hybrid Mimic breeding strategy in crop species would benefit both farmers and commercial companies and could make significant contributions to food supply across the world, especially in poorer countries.