Therapeutic treatment of cancer involves radiotherapy and/or chemotherapy so to generate a large amount of lesions in the DNA. Because cancer cells have reduced capacity to repair DNA lesions and are unable to slow down proliferation, this treatment leads preferentially to the death of the tumour cells. However, one major problem encountered is the reappearance of cancer after therapeutic treatment followed by the death of the patient. This underlies the existence of resistance mechanisms whose origin is not well known. Recently the existence of special cell types within the tumour, also known as cancer stem cells, has been proposed to explain the resistance to the therapy. These cells are known to display similar features to embryonic cells that characterize the early stages of development. Interestingly, early embryos show similar features to cancer stem cells, in that they are resistant to a wide variety of DNA damaging agents. 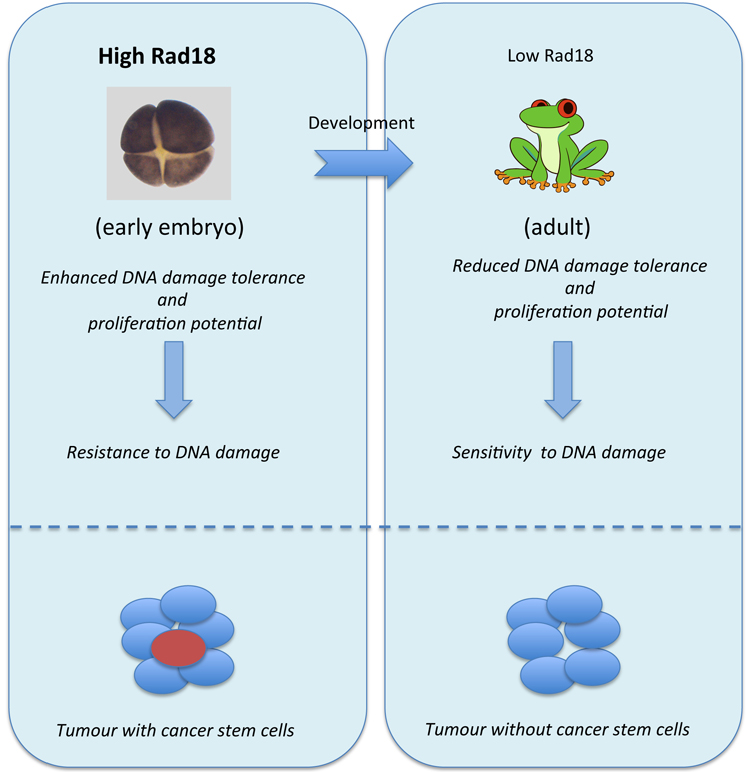 We have been interested in exploring the DNA damage response in the early embryos of the vertebrate-clawed frog Xenopus laevis. We have discovered that early Xenopus embryos are resistant to DNA damage because they have a high capacity to tolerate it. In so doing embryonic cells continue to divide even in the presence of DNA lesions and could potentially accumulate genetic alteration, also known as mutations. Incidentally, these finding opens a new perspective in terms of evolution since suggest that early embryos may accumulate mutations which may contribute to the diversity of each individual organism. If this mechanism will be proven to operate also in humans, it may explain the diversity observed in cancer predisposition of each individual in a population. We have shown that the ability of the embryos to enhance DNA damage tolerance is dependent upon a protein master regulator of the tolerance to DNA damage, the Rad18 ubiquitin ligase. The high abundance of Rad18 in early embryos is responsible for tolerating DNA lesions, by promoting proliferation in the presence of DNA damage. We have also shown that this is also the case in human cells that have artificial high levels of Rad18. Finally, we have observed that Rad18 is expressed at high levels in cancer stem cells isolated from patients with brain cancer, or glioblastoma. This is one of the most aggressive cancer since displays an extraordinary resistance to therapeutic agents (DNA damaging agents) and whose life expectancy without treatment is of about 4 months. We have observed that reducing the abundance of Rad18 in glioblastoma renders this cancer sensitive to the therapeutic agent cisplatin. These findings make of Rad18 a novel target for the treatment of glioblastoma to the therapy. In conclusion, our findings open a new avenue in studying the molecular bases of therapeutic resistance of cancer stem cells and propose the DNA damage tolerance system as a promising target to sensitize cancers resistant to the therapy.