In addition to be a key component of blood hemostasis and coagulation, platelets have recently been implicated in thrombotic events associated with immune dysfunctions or inflammation. Platelets participate to innate immune responses and inflammation by releasing a variety of cytokines and chemokines, and by expressing a wide repertoire of functional pattern recognition molecules. Among these, platelets express interleukin-1 receptor (IL-1R) and Toll-like-receptor (TLR) family members, which are involved in platelet activation, platelet-dependent anti-microbial activity and platelet-leukocyte reciprocal activation and immunopathology (Fig. 1). 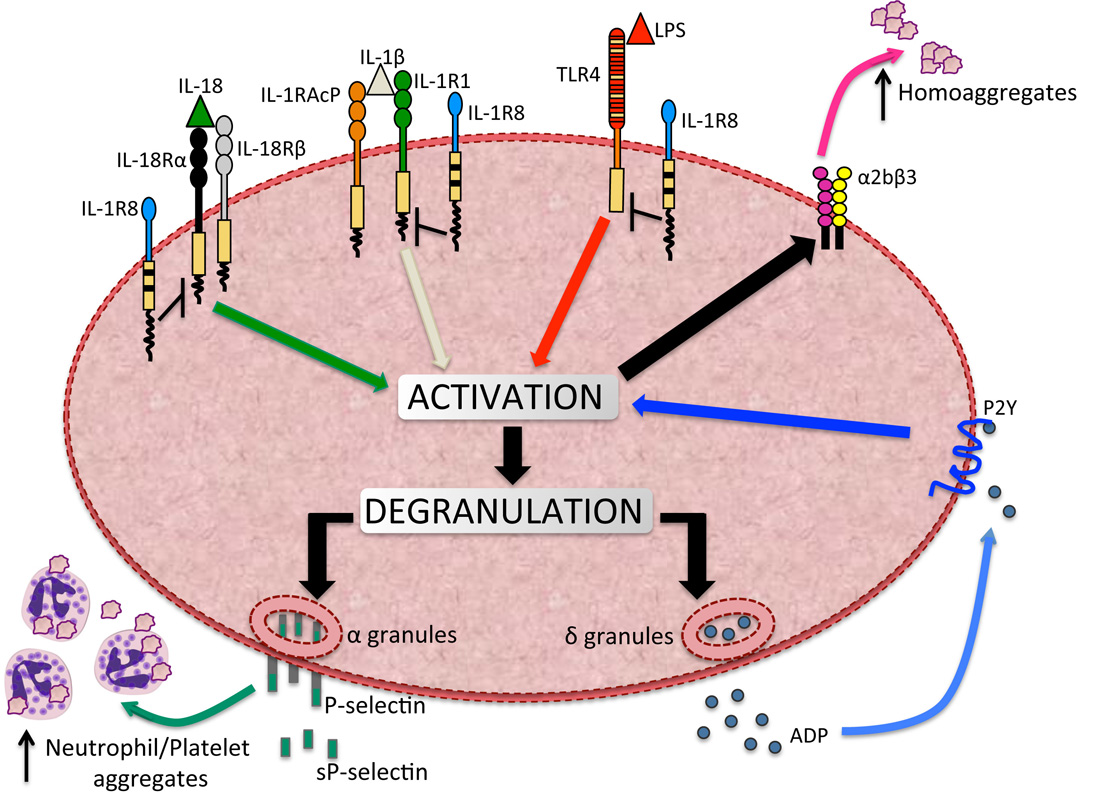 Fig. 1. Expression and function of IL-1R8 in platelets. Pro-inflammatory activation of TLR4, IL-1R1 and IL-18R contributes to platelet α and δ granule release leading to P-selectin surface expression and shedding, and activation of the integrin α2bβ3. These molecules are key actors for the initiation of immunothrombotic events characterized by increased heterotypic (neutrophil-platelet) and homotypic (platelet–platelet) aggregate formations. IL-1R8 emerges as a novel negative regulator of these processes playing relevant roles in immunothrombotic conditions.

We recently reported the first evidence of the expression of IL-1R8 in human and murine platelets and megakaryocytes. The functional role of IL-1R8 in murine platelets was investigated taking advantage of IL-1R8-deficient mice. Despite normal levels of circulating platelets, IL-1R8-deficiency was associated with platelet hyperactivity, together with increased homotypic aggregate formation triggered by pro-thrombotic stimuli (Fig.1).  In addition, the lack of IL-1R8 on platelets was associated with increased neutrophil/ platelet aggregate formation in basal conditions and after treatment with lipopolysaccharide (LPS) or IL-1 family members (IL-1 or IL-18) in vitro and in vivo, indicating that IL-1R8 is a negative regulator of platelet heterotypic aggregation associated with inflammatory conditions and endotoxemia (Fig. 1).

The results obtained in this study demonstrate that platelets, which have a large repertoire of TLRs and IL-1 receptor family members (IL-1R1 and IL-18Rα, as shown in our study), express high levels of IL-1R8, which is involved in inflammation-related functions of human and murine thrombocytes and plays a novel non-redundant role as regulator of immunothrombosis. Thus, targeting IL-1R8 might represent a promising therapeutic approach in patients with exacerbated innate immune responses and uncontrolled thrombotic events.