Influenza represents an acute viral respiratory disease caused by RNA-enveloped viruses. They belong to the Orthomyxoviridae family which comprises five genera, but only two (influenza A and B viruses) are of medical relevance in humans. Even though decades of interventions, constituted by surveillance as well as pharmaceutical treatments, influenza viruses are still responsible for epidemics worldwide representing an important cause of concern in the field of public health. In more detail, the infection is associated with significant morbidity and mortality with up to 5 million cases of severe illness and between 290,000 and 650,000 respiratory death worldwide. These data emphasize the importance of vaccine prophylaxis especially for high-risk groups which include the elderly, young children, people with pre-existing comorbidities, pregnant women and healthcare workers (Fig. 1). 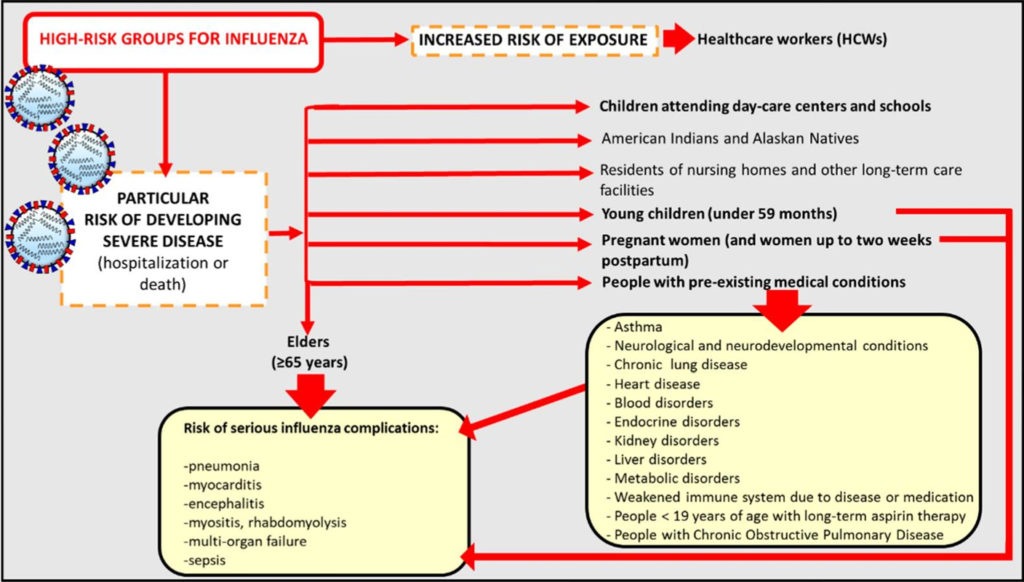 Influenza vaccines are the most effective strategy for the prevention and control of seasonal influenza virus infections and for reducing influenza-related morbidity and mortality. Since the mid-1980s, two lineages of influenza B viruses have been distinguished. These can co-circulate, in variable and unpredictable proportions among regions and seasons, limiting the protection provided by inactivated trivalent influenza vaccines (TIVs). TIVs are constituted by two influenza type A subtypes (A/H1N1 and A/H3N2 strains) and one B strain (belonging to B/Yamagata or B/Victoria lineages) and they represent the majority of seasonal influenza vaccines currently used. Recently, influenza B viruses have constituted a significant cause of flu, accounting for about 23% of the circulating strains around the world and even reaching 90% during some seasons, thus contributing significantly to influenza morbidity. The current virological situation and the difficulty in predicting which influenza B virus lineage will be prevalent during the next influenza season have reduced immunological protection among vaccinated individuals. This has prompted efforts to formulate quadrivalent influenza vaccines (QIVs), to enhance protection against circulating influenza B viruses. Here the results obtained from seven phase III clinical trials evaluating the immunogenicity, safety, and lot-to-lot consistency of a new quadrivalent split-virion influenza vaccine (Vaxigrip Tetra®, Sanofi Pasteur) are described. Vaxigrip Tetra belongs to the Vaxigrip® family of influenza vaccines and it is formulated by adding a second B strain to the already licensed TIV. Since Vaxigrip Tetra was developed by means of a manufacturing process strictly related to that used for TIV, the data on the safety profile of TIV are considered supportive of that of Vaxigrip Tetra. The safety and immunogenicity profile of Vaxigrip Tetra, widely investigated in all age-groups (children, adults, and elderly), were similar to those of the corresponding licensed TIV. Furthermore, it induced a superior immune response towards the additional strain, without affecting immunogenicity towards the other three strains and eliminating the possibility of seasonal mismatched B strains. Vaxigrip Tetra formulation is well tolerated, has aroused no safety concerns, and is recommended for the active immunization of individuals aged ≥6 months. In addition, preliminary data confirm its immunogenicity and safety even in children aged 6–35 months and its immunogenicity in older subjects (aged 66–80 years).

Containing one additional B virus strain in its formulation, Vaxigrip Tetra could provide significantly higher protection than the previously available TIV eliminating the possibility of seasonal mismatched B strains, as observed during the last decade with regard to previous influenza vaccines, without compromising protection towards influenza A.