HIV uses a special strategy to evade the immune system during the course of infection in a human, based on features of envelope protein.  The HIV Env glycoprotein that forms spikes on the surface of virus particles is a complex of two subunits: the surface gp120, which mediates the binding of the virus to specific cell-surface receptors, and gp41-surface-transmembrane-cytoplasmic subunit, which promotes membrane fusion (Fig 1 A).  The native Env, which is the main target for immune system is thought to be present in a metastable state on the surface of viral particles.  The immune system is not able to develop protective antibodies against those sorts of Env proteins, but indeed it may induce non-neutralizing antibodies against HIV.  The specific regulation of membrane fusion is important in biological functions such as viral entry.  A conformational change of the Env protein, which can make it sensitive to immune system,   is triggered either by receptor binding or by inside-out signaling from the cytoplasmic domain (CT) of gp41. Unfortunately, conformational changes of the Env protein that is triggered by a receptor binding take place in endosomes inside of cells (Fig.1 A).  Genetically modified CT domain can affect the conformation of the external domain of gp41 on the cell surface and it may also enhance exposure of receptor-binding segments in gp120 (Fig. 1B). 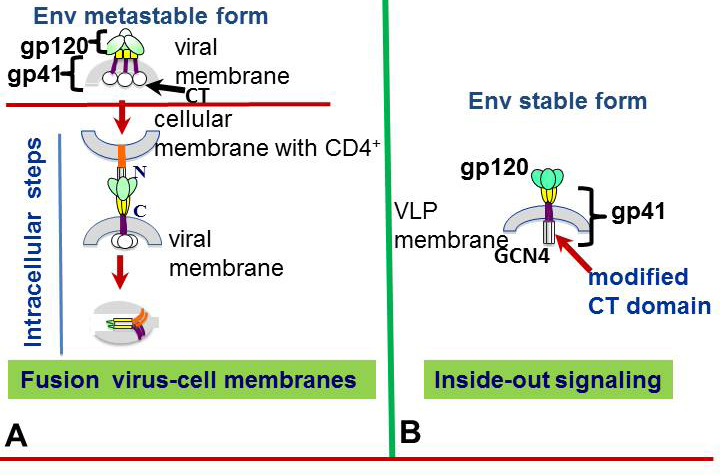 VLPs are assembled as noninfectious retrovirus-like particles that closely mimic the morphology of naturally occurring virions, their production requires only the Gag polyprotein.  The immune system is effective in recognizing antigens in a particulate form, which mimics that of native virions.  An important characteristic of VLP is that it contains a trimeric Env with a native conformation, and rendering a possibility for Env spikes to be stabilized, avoiding immune misdirection and the induction of non-neutralizing antibody responses.  Using a leucine zipper trimerization sequence from the yeast GCN4 transcription factor, trimeric forms of target proteins can be stably expressed.  Native envelope proteins are incorporated into VLP at low levels. 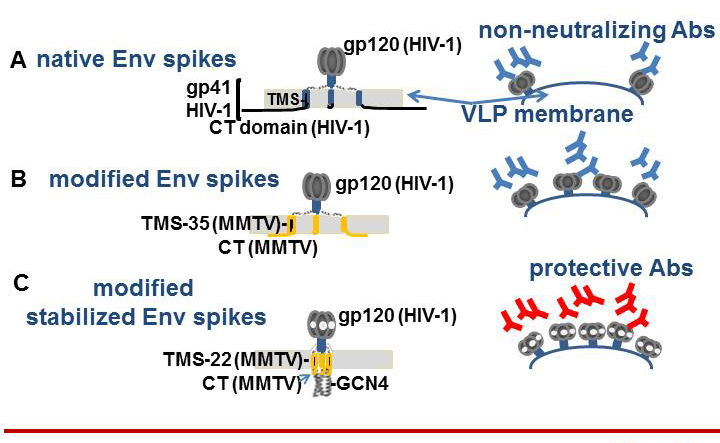