The body’s immune defense mechanisms play an important role in the inhibition or progression of liver diseases. We assessed the expression levels of different immune cells and cytokines in patients with chronic hepatitis C (CHC), liver cirrhosis and hepatocellular carcinoma (HCC) compared to a normal control (NC) group, we found that the level of active plasmacytoid dendritic cells (pDCs) expressing CD40+ was significantly decreased in HCC patients compared to the NC. Whereas, the inactive pDCs (CD303+/HLA+) did not change significantly among the four studied groups. This was also confirmed by the significant decrease of serum IFN-α, and increased IL-10 in HCC patients compared to NC. This is in concordance with previously published data showing that IL-10 inhibits IFN-α production and promotes apoptosis of human pDCs (Dolganiuc et al., 2006 and Duramad et al., 2003). 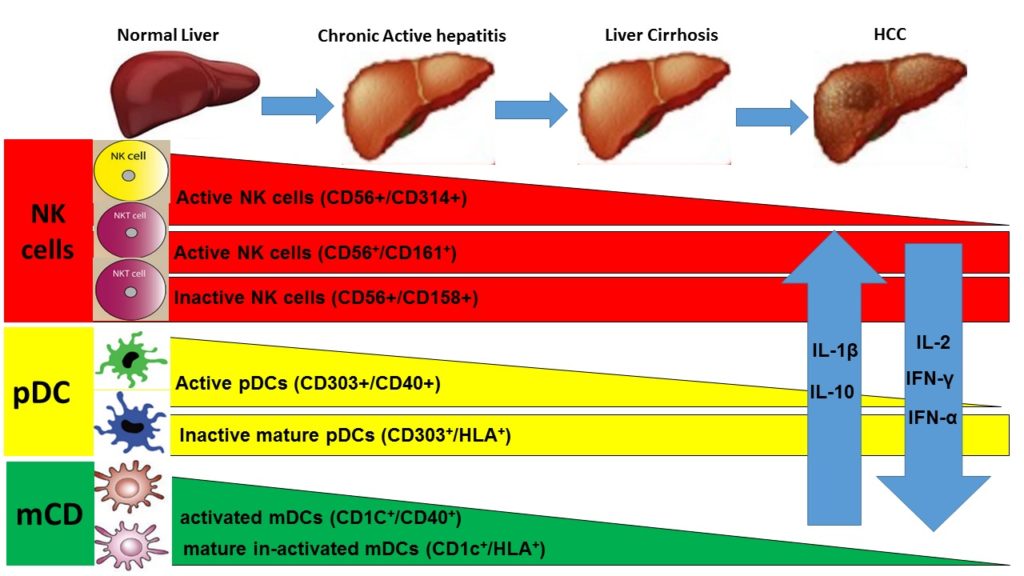 Our results also showed a significant decrease in the active and inactive myeloid dendritic cells (mDCs) in HCC patients compared to NC group, however the level of active mDCs (CD1C+/CD40+) was significantly decreased in liver cirrhosis compared to CH patients indicating that the inhibition of DC maturation in HCC is a critical feature of tumor escape mechanisms from immune surveillance (Obermajer et al., 2011).

Natural killer (NK) cells play an important role in controlling viral hepatitis, liver fibrosis, and hepatic carcinogenesis. Their functions are modulated by different classes of receptors present on its surface, among which we investigated the role of the killer cell immunoglobulin-like receptors (KIR; CD 158), NKR-P1A (CD161) and NKG2D (CD314). Our results revealed that the expression of the KIR (CD158+) inhibitory receptors and the activating NKR-P1A (CD161) on NK cells was not changed significantly between HCC and NC groups. Thus these two pathways may not be involved in the pathogenesis of HCC, however the latter was significantly increased in CHC. In addition, there was statistically significant correlation between the expression of CD161 on NK cells and IL-12 in patients with chronic hepatitis C, which illustrates the role of NK cells (CD56+/CD161+) in viral hepatitis.

On the other hand, the levels of active NK cells expressing NKG2D, were statistically decreased in HCC, CHC and liver cirrhosis compared to NC. Furthermore, these active NK cells (CD56+/CD314+) were not expressed in 63% of HCC patients, emphasizing its importance during the development of HCC.

Hence, we conclude that there is immunological changes occur in HCC patients which could be a possible candidates for future immunotherapy. Among these changes is the expression of NKG2D on NK, pDCs expressing CD40, IL-2 and IL-10. These factors could be implicated in the pathogenesis of HCC, and provides an attractive targets for therapeutic modalities in CHC and HCC patients.