Alcoholism is a complex behavioral disorder characterized by the loss of control over alcohol consumption often involving other drug abuse with a relapsing and remitting course leading to significant impairment. Chronic alcohol use and alcoholism damages many critical organ systems including the brain, liver, gastrointestinal tract and bone with broad effects on bodily functions influencing general health. Alcohol-related biochemical disturbances are known to trigger an enhanced immune response leading to inflammation, organ failure (e.g., hepatitis, pancreatitis) and death in severe cases. Activation of immune factors and inflammation in the brain is also believed to have degenerative effects on neurological structure and function that may impact mood, thinking and traits related to alcoholism including impulsiveness. We set out to provide a detailed characterization of inflammatory factors disturbed in alcoholism and the relationship between psychiatric symptoms and severity of alcoholism.

Examination of immune function and behaviors related to alcoholism
We collected blood samples from 40 adult males (mean age 51±6yrs) with current alcohol dependence recruited as part of a clinical trial on alcoholism and 30 control males (mean age 48±6yrs) with no history of alcoholism from a blood collection center. We used a highly efficient “multiplex” immunoassay method that was capable of measuring blood levels of 41 different immune factors at the same time from a single sample of blood (see journal cover page). The immune factors examined were drawn from four different biological categories including hematopoietins, chemokines, growth factors and interferons involved with cell growth and immunological functioning including bone marrow growth and inflammation. Blood levels of these factors in men with alcoholism were also compared to scores from standard tests of mental and emotional functioning obtained from personal interviews with the men. These tests included the Symptom Checklist-90R (SCL-90R) which measures the number of symptoms of psychiatric distress, the Barratt Impulsivity Scales (BIS) which characterizes the features and level of impulsiveness and the Alcoholism Severity Scale (ASS) which rates the severity of alcohol abuse behaviors.

Twenty-three of the 41 measured cytokines in our assay were within a detectable range. Alcoholism illness and severity were correlated with the level of several immunologic factors (Fig. 1). Cytokines associated with inflammatory response [interferon γ-induced protein-10 (IP-10); monocyte chemoattractant protein-1(MCP1); regulated on activation, normal T cell expressed and secreted (RANTES)] were significantly increased in the males with alcoholism compared to the controls. Several immune factors involved with the growth and functioning of bone marrow, blood coagulation and wound healing impacting general health [granulocyte-colony stimulating factor (GCSF); soluble CD40 ligand (sCD40L); growth-related oncogene (GRO)] were significantly reduced in alcoholism. In addition, the levels of two inflammatory cytokines, GRO and RANTES, were correlated with increased impulsiveness in alcoholism and one inflammatory cytokine, macrophage-derived chemokine (MDC), was associated with increased symptoms of anxiety and phobia in alcoholism. 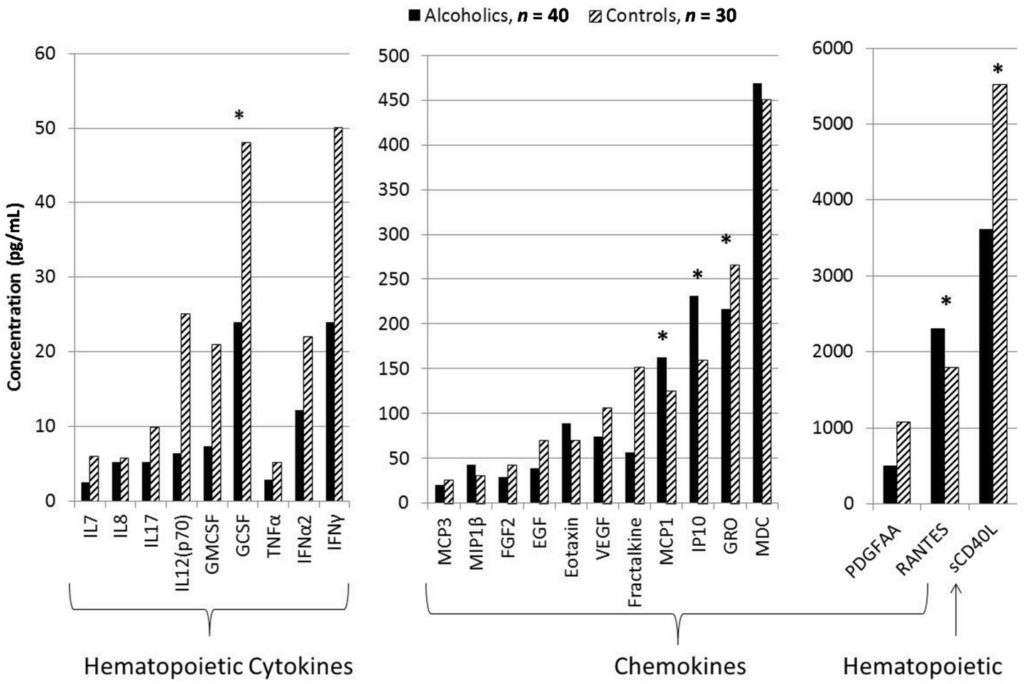 Implications for alcoholism course, treatment and recovery
These data confirm the presence of significant impairment of immune functioning through the suppression of bone marrow, blood coagulation and cellular growth factors expected to impair healing and contribute to poor general health commonly observed in alcoholism. The increases in inflammatory responses by RANTES, GRO and MDC related to alcohol exposure have the potential to influence brain function and course of alcoholism. Increases in impulsivity and anxiety due to these elevated inflammatory agents could increase the likelihood of drinking, the level of alcohol consumption or the ability to achieve and sustain abstinence. It is also possible that new drugs designed to block these specific factors could improve the quality of life and encourage successful recovery from alcoholism. Further research is needed to confirm and evaluate these relationships.