Phosphorus (P) is an essential nutrient to plant production. Phosphate mining (PM) activities have been strongly motivated by the increased marketing of fertilizer produced by PM. The PM activities (i.e., processes of exploitation, exploration, and beneficiation) can dramatically change the existing geology, topography, vegetation cover, and chemical equilibrium of the mine sites and considerable distances from the mine sites. In this study, we investigated the influence of large-scale PM on hydrology and water quality in the Huangbai River basin, China, using data before (from 1978 to 2002) and during (from 2003 to 2014) the PM period. 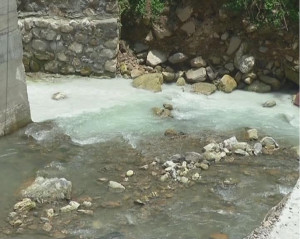 Our results showed that the PM activities generally reduced runoff (i.e., the runoff coefficient and runoff peak) during wet seasons, primarily attributable to the increased capture and evaporation of precipitation and runoff by the mining pits. For a mining scale of one unit of PM productivity (i.e., 108 kg phosphate ore), approximately 230 kg of total nitrogen (TN, including nitrate, nitrite, and ammonia nitrogen), 1200 kg of suspended solids (SS), and 140 kg of total phosphorus (TP, including soluble and insoluble phosphorus) were generated. With the PM scale in the river basin, it was estimated that more than 2.5×105 kg of TN, 1.3×106 kg of SS, and 1.5×105 kg of TP were generated during the mining periods. These pollutants were eventually discharged into surface water bodies (i.e., rivers and reservoirs) (Fig. 1). Significantly higher amount of ammonia nitrogen (NH4+) and TN was produced in the sub-basins with PM than in the sub-basins without PM. However, the amount of NH4+ and TN that entered into rivers from the background non-point sources in the sub-basins with PM was smaller than in the sub-basins without PM. The result was attributed to the reduction of runoff volume by PM because the pollutants from the background non-point sources were transported by the surface water flow. The water body of reservoirs in the river basin also was affected by the PM activities. The yearly mean concentrations of TN in reservoir water increased with the scales of PM. Although the mean concentrations of soluble phosphorus (SP) in the reservoirs were low before 2012, the SP concentrations greatly increased during the later stage of PM. This result was mainly related to the dissolution of apatite in the sediment, that is, the insoluble P in apatite in the form of SS became SP. The increase of TN and SP concentrations in reservoir water can potentially cause eutrophication of the water body. The results from this study should help us to better understand the influence of PM activities on surface water quantity and quality in a basin scale.