The future of a well-known consumer world seems to be closely related to multifunctional engineering nanomaterials fulfilling a completely new role comparing them with the traditional structures and products. Such materials are inclined to sophisticated applications e.g. hydrogen storage, photovoltaic solar cells, catalytic decomposition of pollutants, thermoelectric energy conversion, biology-active agent, medical imaging, etc. Thus, the redesignation process of the simple ‘bulk’ materials into nanoscale was called “evolutionary nanotechnology” and takes place almost in each laboratory entirely the world. 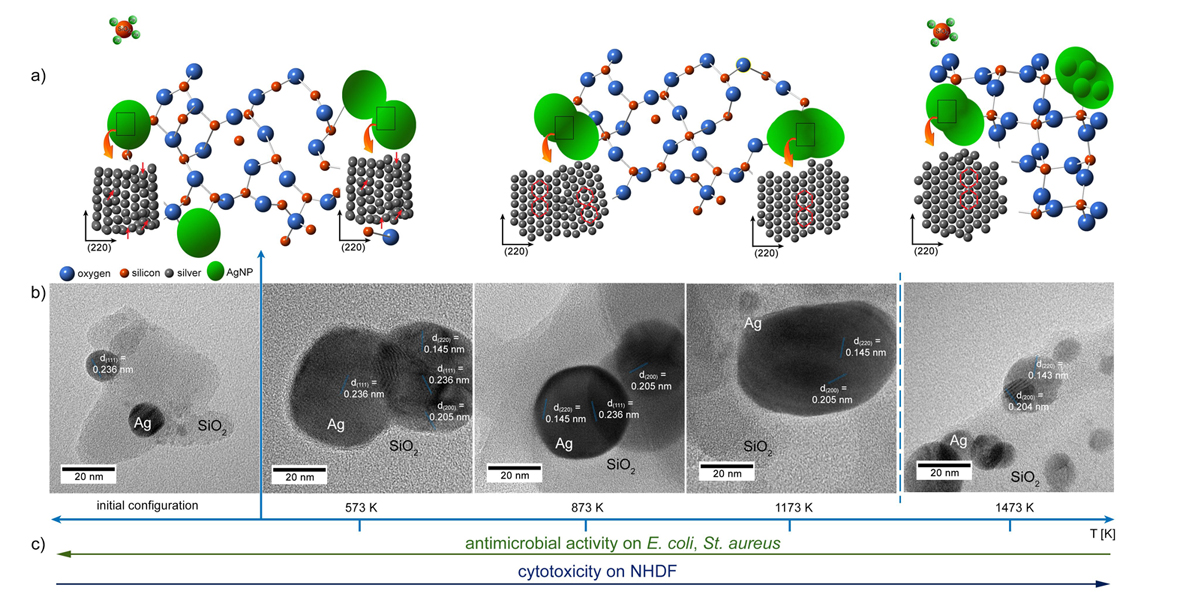 Fig. 1 a) Model of structural modification of silver-silica nanocomposite due to annealing. b) The HRTEM image of Ag/SiO2 systems measured after the different times of sample annealing. c) Graphical representation of decline of antimicrobial potential on E. coli and S. aureus as well as an increase in the cytotoxicity of NHDF.

Most designed and investigated nanomaterials (Φ~100 nm) are carbon nanostructures, or metallic, and ceramic nanoparticles. Such single nanoproducts are designated to improve the physicochemical, biological, and mechanical parameters of commonly used materials. However, despite many advantages, they have many problems (concentration, chemical purity, size, shape, agglomeration, aging, oxidation, etc), which should be resolved in the laboratory before further application in the industry. One way to reduce those problems is to trap nanometer-sized material and immobilization it on chemically modified non-stoichiometric fumed silica. The most popular and promising among metals from is silver in combination with an inorganic carrier. Such a connection ensure a slow release of discharge silver ions for an extended period. Unfortunately, nanomaterials or nanocomposites are usually intended to work in various environmental conditions providing the modification of their properties. Here, gradual silver oxidation may cause a lowered release rate of the Ag+ and reduce biological responsiveness. In turn, silver coalescence and their agglomeration may limit the correct assessment of dose relations and inhibit the biological response.

The proposed model of the temperature evolution of the silver-silica nanocomposite and silver crystal lattice seems to highlight the correlation between the physicochemical, structural, and biological features (Fig. 1). It can easily explain changes in the system. As a first step, the initial nanocomposite was described as a system with mono-dispersed 8 nm silver (Ag0 or Ag+) embedded into a silica carrier. The temperature-dependent experiments showed the formation of atom clusters is correlated with silver agglomeration because of particle coalescence up to 170 nm. At the same time, chemical studies showed a decrease of silver concentration, as well as the formation of sub-nanometer Ag+ and/or Ag2+ clusters as the temperature rises to 1173 K. In turn, the structurally disordered silica carrier had been entirely transformed into crystalline cristobalite and tridymite after sintering at 1473 K. This transformation determines the change in the silver – silica molecular interaction and provides a modification of morphology and shape of the silver particle from spherical to a more ellipsoidal shape. What is more, partial erosion of larger particles and the formation of smaller ones was found on the route of the so-called ‘digestive ripening’ process. All the modifications implicate a partial reduction of Ag2+ to Ag+ and silica – AgO/Ag+ complex formation. Simultaneously physicochemical, and structural modification observed during the material sintering implicates the inhibition of potential bacterial growth as well as stimulates an increase in cytotoxicity towards human cells. As a result of those studies, one can conclude that strong thermal modification of the silver-silica nanocomposite reduces antimicrobial potential while is more prone to increase cytotoxicity potential against human cells.