Importance of selenium for brain function

Trace element selenium is known to be essential for the human beings. Generally accepted daily intake of selenium is in the range of 20-70 μg. ‘Effective’ part of the ingested selenium is consumed for producing of special proteins, activity of which is selenium dependent. These are the so-called selenoproteins. Human beings have 25 selenoproteins in their genome. The majority of these are relative to the antioxidant defence of the body. The metabolism of selenium in mammals is extremely complicated. Unlike other essential trace elements, such as copper, iron or zinc, selenium is introduced into selenoproteins directly at the stage of polypeptide chain biosynthesis and not after the protein is already built. 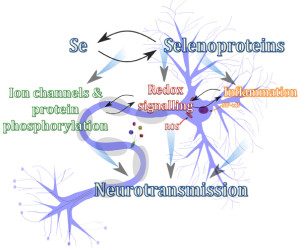 Through selenoproteins selenium is involved into the diverse functions of the brain including motor performance, coordination, memory and cognition. In neurodegenerative disorders such as Alzheimer’s disease, Parkinson’s disease, amyotrophic lateral sclerosis and epilepsy selenium metabolism seems to be altered, possibly, due to pro-oxidative events accompanying these states. For Alzheimer’s disease, Parkinson’s disease and epilepsy selenium supplementation was shown to be beneficial. Nevertheless, for amyotrophic lateral sclerosis it was found that excess of inorganic selenium may be harmful.

A diverse relation of selenium and selenoproteins to the brain metabolism and function may point to their direct involvement into the brain signalling pathways. Selenoproteins seem to be of special importance to the neuronal cells, which utilise γ-aminobutyric acid (GABA) as their signalling molecule (GABAergic neurons). In both selenium deficient organisms and organism with genetic impairment of selenoprotein biosynthesis this kind of neurons are affected most heavily. Severe selenium deficiency or malfunction of selenium transporting protein, selenoprotein P, causes degeneration of special group of GABAergic neurons leading to impaired neuronal function. This may result in such disorders as motor abnormalities, including seizures, and cognitive impairments like affected learning. The reason is the abundance of the GABA-utilising neurons in the corresponding brain regions – hippocampus, cerebral cortex and cerebellum.

However, other brain cell types also appear to use selenium. The neurons, which are utilizing another neurotransmitter dopamine, are shown to be more resistant to oxidative damage under adequate brain selenium supply compared to selenium deficient brain. Dopaminergic neurons are severely affected in Parkinson’s disease and related motor disorders. However, excess selenium results in accumulation of inorganic selenium species in the brain. And this may cause additional damage to these cells. Same corresponds to another important neuronal signalling molecule – acetylcholine. Under adequate selenium supply acetylcholine neurons seem to benefit from selenium, but at higher doses selenium becomes toxic to them.

Mechanism of selenium interaction with the neuronal signalling is complex and not fully understood up-to-now. It may be not limited to the antioxidant properties of selenoproteins. It is possible that effecting inflammation and other signalling mechanisms like protein modifications and ion permeability of cell membranes as well as contributing to brain calcium and brain cholesterol metabolism also play their part. Moreover, recently for one of selenoproteins, selenoprotein P, a direct brain signalling function was proposed in addition to its selenium-transporting ‘duties’. So, soon we may expect new findings in the field of selenium biology.