Importance of updating prognostic predictions: an example from breast cancer

Today prognostic prediction models are an integral part of clinical practice in many fields. They are typically used to access the risk of an event in the future after a well-defined starting point, for instance the risk of death after diagnosis of breast cancer. The predictions are individualized based on the patient’s characteristics, such as age, gender, basic health etc. The prediction models are used in patient consultation as an aid to inform the patient about the outlook for the future. Informing the patient about the risk of an unhealthy lifestyle might lead to a change to a healthier one. Predictions may also be used to guide the choice of treatment, e.g. one treatment might improve the outcome, but at the same time give a higher risk of adverse effects. 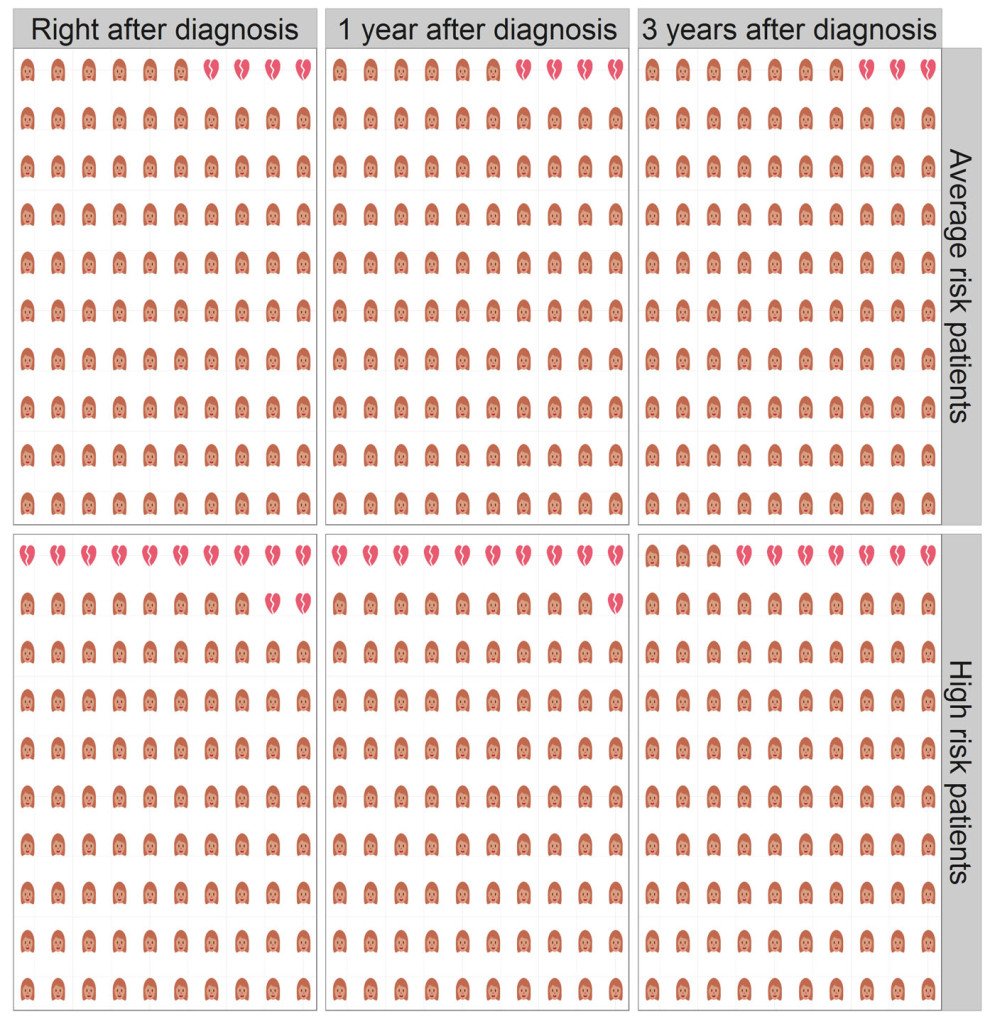 Illustration of the 5-year survival predictions for high and average risk patients at different time points during follow-up. The woman represents those that are still alive after 5 years and a broken heart represents those that died. The first column shows the outcome right after diagnosis, the second and third shows the outcome for women that were still alive one or three years after diagnosis.

A limitation of these prediction models are that they in principle only allow predictions to be made from the starting point, i.e. right after diagnosis. In most cases patients come back for follow-up, and in this case the standard prediction model may no longer be valid. For this reason, we need dynamic prediction models that can be updated.

We used data from a large clinical trial with breast cancer patients to develop the model. The model can predict the 5-year risk of death for breast cancer patients at any time-point from start of diagnosis to up to three years after. The model updates predictions as time progresses and more information is collected on the patient, e.g. the model can adjust predictions if a patient experiences a recurrence of a tumour.

To give an example, imagine that we have 100 women with the exact same characteristics. We can use the model to say how many of these women will survive the next 5 years. In Figure 1 we have six groups of 100 women. A female face represents those that are still alive after 5 years and broken hearts represent those that died. The upper row represents women of average risk and the lower row represents high risk. In the first column we see that out of 100 women 4 died within 5 years after diagnosis in the average risk group, and 12 in the high risk group. In the middle we have the 5 year survival for 100 women that were still alive one year after diagnosis, and the last column shows the result for women that were still alive three years after diagnosis. The message here is that, even though there were no changes in their characteristics, the chance of surviving the next 5-years changes over follow-up. This is especially evident in the high risk group, where the number of deaths goes from 12 to 7.

This illustrates that using a standard prediction model for predictions later on is not always appropriate. However, we can correct this by using the already existing tools to make dynamic prediction models.