Through centuries, the immune system evolved to become highly proficient in protecting the human body from invading threats. Part of its strength relies on antibodies produced within germinal centres (GC). These structures form intricate networks of immune cells, such as the B cells (antibody producers) and T helper cells (helpers of the B cells). As GC reaction is so powerful in antibody production, its regulation is critical to avoid the emergence of antibodies recognizing tissues within the human body that can be potentially harmful (autoantibodies). Recently, a subset of T cells, called T follicular regulatory (Tfr) cells, was identified as a key regulator of GC reaction in murine models. 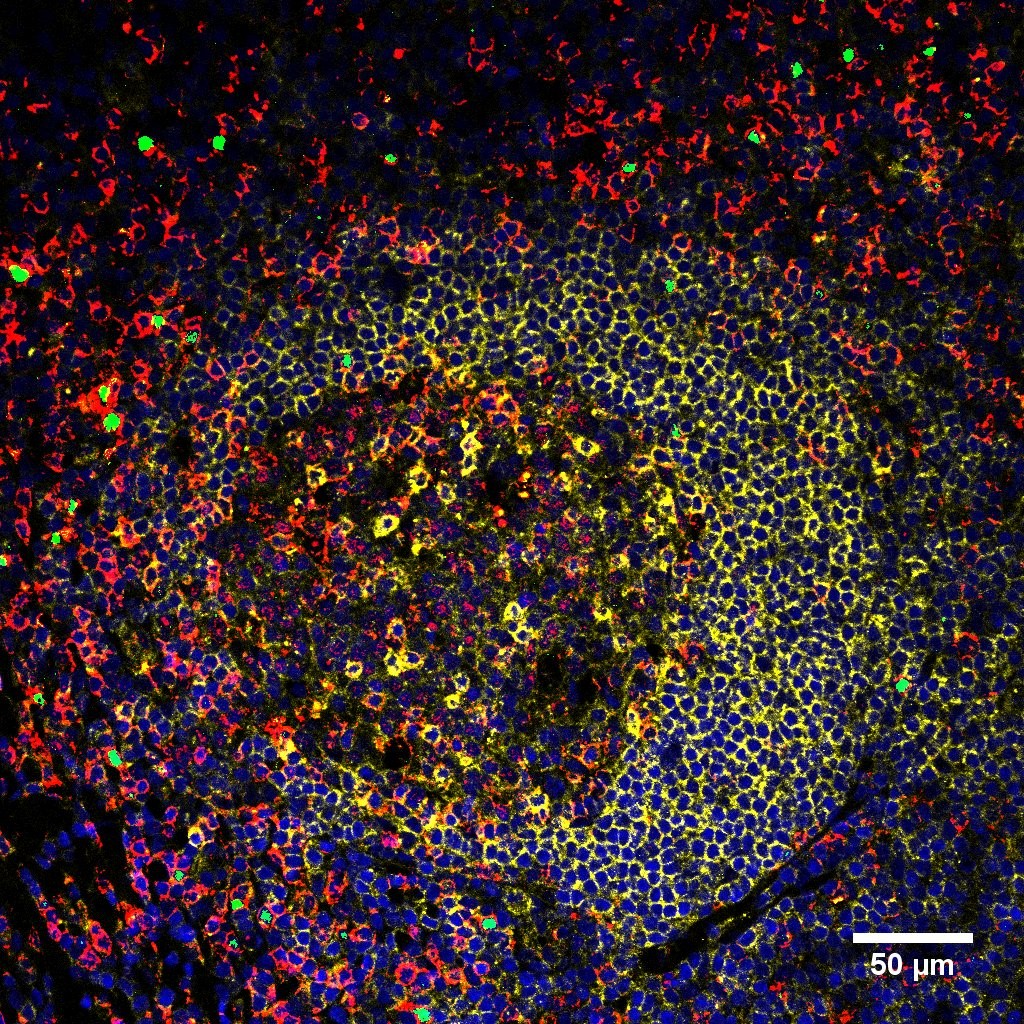 Fig. 1. Germinal centre. Anatomical structure within lymph nodes, spleen, and lymphoid tissue such as tonsils (this case is a GC within a human tonsil). Blue (DAPI) stains the cell nuclei; Yellow (CXCR5) stains GC T and B cells; Red (CD4) stains T cells within the T cell area (outside the GC, stained in yellow), and some follicular helper T cells within the GC (that are simultaneously yellow); Green (Foxp3) stains regulatory T cells, Tfr cells are simultaneously green, red and yellow.

Therapeutic regulation of autoimmune diseases (such as Rheumatoid Arthritis and Lupus) is a long-lasting challenge of modern medicine. In these diseases, autoantibodies can mediate organ injury and destruction leading to disease manifestations and eventually to death. Although, recent scientific discoveries led to the development of new drugs that changed the course of these diseases, most therapeutic options are still unsatisfactory due to their side effects and lack of efficacy in a proportion of patients.

To address the role of Tfr cells in human autoimmunity we studied Sjögren’s syndrome (SS), the second most common systemic autoimmune disease characterized by generalized dryness of mucosal surfaces and increase risk of lymphoma. We found Tfr cells were increased in blood of SS patients, mostly in patients with high levels of blood autoantibodies, opposing our prediction that Tfr cells would be preventing the disease.

To understand the reason behind such unexpected results we studied several human samples. For instance, comparing Tfr cells from blood and tonsils (tissues where antibodies are produced) from children undergoing tonsilectomy, we found blood Tfr cells are immature cells. Using several in vitro assays, we also showed blood Tfr cells are not able to fully suppress antibody production. We confirmed blood Tfr cells are immature and emerge from tissues where the antibodies are produced before reaching GC by study patients with genetic defects (affecting B cell formation). Furthermore, exposure of healthy volunteers to flu vaccine led to a transient increase in blood Tfr cells, in line with their generation during immune responses with antibody production. Blood circulating Tfr cells are distinguished from other circulating lymphocytes by two molecular markers, CXCR5 and FOXP3, the first of which endows these cells with the ability to migrate into specific zones of lymph nodes where they may complete maturation and regulate antibody production. Thus, we found Tfr cells in human blood are not markers of the immune system GC-regulatory capacity. In fact, ongoing humoral responses, such as vaccination or autoimmunity, lead to increased production of blood Tfr cells still immature. Overall, these observations provided an explanation for our initial unexpected results on SS patients. Moreover, we propose blood Tfr cells can constitute a novel biomarker to identify SS patients with disturbed GC reactions.