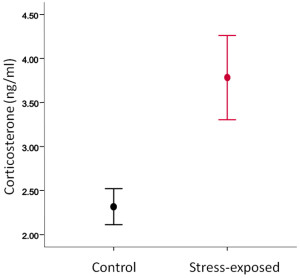 Under challenging circumstances, such as predator exposure or lack of food, animals naturally secrete stress hormones. Production, secretion and release into the bloodstream of these hormones is tightly regulated by the Hypothalamic-Pituitary-Adrenal axis (the stress axis), a highly conserved chemical signalling system in vertebrates. When exposed to an environmental challenge, more stress hormones are secreted, triggering an array of changes including the mobilisation of energy from storage sites to muscles. Such changes facilitate escape and promote short-term survival. Over a longer time scale, however, the prolonged and repeated activation of the stress axis is thought to be harmful since it can lead to impairment of brain functioning and immune responses. Therefore, it is often predicted that chronic or repeated stress exposure should result in increased health risks, and hence shorten individuals’ lifespans. Support for this idea mainly comes from biomedical research and the stressful circumstances involved are often fairly severe. However, recent eco-physiological work suggest that, under some circumstances, exposure to increased stress hormones can be beneficial even over the longer term, extending rather than shortening lifespan. 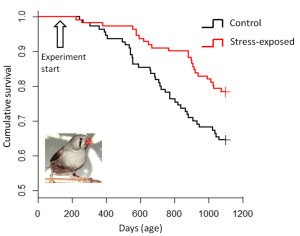 Fig.2. Survival in the stress-exposed females was higher compared to controls up to 3 years of age (p=0.016).

In our study, we kept female zebra finches, a small songbird, in two different environments from early adulthood. One environment was a somewhat stressful one, in which food was not available for one third of the daylight hours, on an unpredictable schedule; for the remaining two thirds of the day, plentiful food was provided and the birds did not lose weight. But while the food was absent, their stress hormone levels increased (Fig. 1.). The other group had plentiful food all day long. We monitored the survival of both groups of birds until they were relatively old (3 years of age). Our results showed that the birds living in the more stressful situation lived for longer on average (Fig. 2.).