People with autism are often described as “seeing the world differently.” They tend to show superior perception for details, like, for example, the autistic artist Stephen Wiltshire’s highly accurate representations of cityscapes drawn from memory. Now, researchers reporting in the Cell Press journal Current Biology on June 11 show that those differences in perceptual skill are present very early in infancy, before the onset of clinical symptoms of autism.

The researchers say that the findings may shift scientists’ view of autism by suggesting that changes in perception are a central feature of the disorder. The majority of research studies have focused instead on language and social interaction impairments. 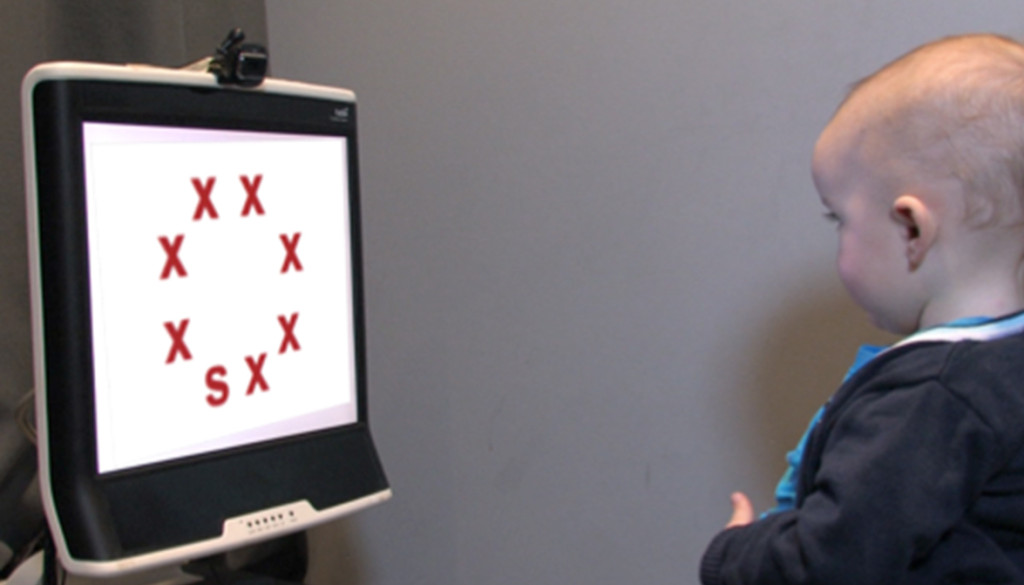 “The prominence of social interaction and communication problems later in development were very much suggestive of a specific ‘social brain’ deficit,” says Teodora Gliga of the Birkbeck Babylab, University of London. “Evidence is now accumulating for early differences in non-social motor and perceptual abilities, which calls for a reassessment of developmental theories of autism.”

The researchers made this discovery by studying infants known to be at higher risk of autism based on the diagnosis of an older sibling. Around 20% of younger siblings are diagnosed with autism themselves, and another 30% show elevated levels of autism symptoms.

Gliga and her colleagues also took advantage of the fact that infants will spontaneously orient their gaze to anything that pops out in a visual scene, for example, the letter S in a group of X’s. To test the infants’ perceptual skill, the researchers used an eye tracker to record the infants’ gazes as they were presented with letters on a screen. The researchers also assessed those younger siblings for signs of autism at 9 months, 15 months, and 2 years of age using standard screening methods.

The study showed that infants with enhanced visual searching ability at 9 months old also had more emergent autism symptoms at 15 months and at 2 years. The finding suggests that the unusual perceptual ability of those infants is “intrinsically linked to the emerging autism phenotype.”

“We know now that we have to give more attention to possible differences in the development of sensation and perception,” Gliga says. “It is the sensory unpredictability of social interaction, but also of many other aspects of daily life, that people with autism most often report as distressing, and we hope this study and others will bring autism research questions closer to the needs of those directly affected.”

The new study also suggests that eye-tracking technology may be useful as part of future batteries of screening tests for early signs of autism.

The researchers now plan to explore what exactly makes children with autism better at visual searches. They also want to explore the links between increased visual perception or attention and difficulties in social interaction, learning, and communication.