In the last couple of years, some fascinating abilities of the immune system have emerged: The immune system is tightly interconnected with the nervous system, and can directly affect how the brain functions, and how a person feels and behaves. The immune system uses designated biological pathways to signal to the brain about the health status of the body, and to trigger behavioral changes called the “sickness response”. What the sickness response feels like is easily recognizable to most of us – you feel tired, achy, unmotivated, low, and you do not feel like moving or interacting with others. These behaviors are not just an unfortunate side effect of sickness; they are the “psychological defense” of the immune system used to guide the individual into behaving in a manner that helps recovery, i.e. to rest. One of the core mechanisms in the sickness response is increased pain sensitivity, and the underlying mechanisms may also be involved in chronic pain. 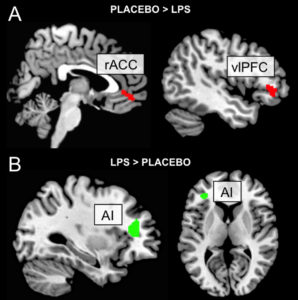 As part of the brain’s adaptation to sickness, the pain network is tweaked by inflammatory signals. We studied a group of healthy individuals during experimental inflammation (induced by endotoxin injections) and a placebo group. The subjects went through a pain test during functional magnetic resonance imaging (fMRI), with the aim of studying the brain’s pain network when the immune system is activated.

Activating the internal pain inhibitory pathway regulates pain perception, and is a healthy and normal way for the brain to make sure that innocuous stimuli are not perceived as painful on a daily basis. When the subjects experienced pain in the experiment, their internal pain regulating system was activated as expected, seen as an activation of the rostral anterior cingulate cortex (rACC) and lateral prefrontal cortex (lPFC). This activation was however lower in the LPS group compared to placebo, suggesting that inflammation weakens the body’s own pain control system. The effect of inflammation on the brain did not differ between men and women, but we have previously seen that women rate inflammation-induced pain as stronger than men. In this study, we could see that the men, both in the LPS group and the placebo group, had a significantly greater activation in the rACC than women overall. If a person has stronger pain regulation to begin with, a greater inflammatory response may be needed for this system to be affected. We argue that women may be more sensitive to inflammation-induced pain than men, as women have a slightly weaker pain inhibitory system in general.

The other part of the pain system’s adaptation to inflammation, was a higher activity in the insular cortex of the LPS group during painful stimulations. This finding suggests an increased processing of internal bodily signals during illness, and/or a greater emotional charge of painful stimuli, as yet another way of the brain to increase pain perception and render an individual more pain sensitive when the immune system is activated.

To draw direct conclusions from such studies to clinical populations must be done with caution, but an experimental model makes it possible to study the effect of inflammation on brain activity in a controlled manner, without the many individual variations found in clinical pain populations. The study suggests that inflammatory components alter the brain’s pain network directly, as part of the immune system’s normally benign ability to prepare the brain for disease and induce sickness behavior. In patients however, the inflammation may however make it easier for the pain to become chronic.