Inflammatory bowel disease: one, two, or a thousand diseases

The so-called Inflammatory Bowel Diseases (Ulcerative Colitis –UC- and Crohn’s Disease –CD-, comprised under the umbrella acronym IBD) often come about with the accompaniment of variegated pathologic conditions that are mostly inflammatory in nature. Among them, the subset named extra-intestinal manifestations are widely known also to the non-medical community. Affections of the joints (arthritis), of the spine (spondylitis), of the eye (uveitis), of the biliary tree (cholangitis), and of the skin with ulcers and rotten wounds (pyoderma gangrenosum) all make this subset. The mechanisms underlying these phenomena are largely speculative; on selected occasions, research has shed light on intriguing circuits, with the demonstration, for example, that specific bug individuals in the gut population (the famous microbiome) can lead pro-inflammatory white blood cells to attack the joints and trigger arthritis.

Another category of IBD-linked affections may follow the rules of contiguity. Two disease phenomena are said to develop contiguously if they belong to the same functional and structural environment, being driven by shared environmental rules. Working as sheaths between the outer contaminated world and the inner sterile body milieu, the gut mucosae are said to pertain to the barrier organ domain. Perturbation of the function of this sheath may result in unchecked inflammation, emerging under the patients’ and doctors’ eyes as UC or CD (see above). Interestingly, basic research  has long proposed that two other barrier organ pathologies – psoriasis (recognizing the skin as barrier organ)and chronic obstructive pulmonary disease (COPD) (recognizing the lung mucosa as its barrier organ) can cross-talk with the gut; this prediction has now been confirmed by clinical statisticians showing an increased frequency of COPD and psoriasis among IBD patients, with CD prevailing over UC.

By converse, a plethora of variegated and apparently unrelated affection may manifest in conjunction with the IBDs  (co-morbidity).  The long list may include skin diseases (Sweet Syndrome), vascular affections (Behḉet, Takayasu, Henoch-Schönlein, etc)neurological abnormalities (from multiple sclerosis to the rare Parsonage-Turner amyotrophic neuritis), to name just a few.

Last but not least, modern genetics have shown that certain genomic aberrations of known diseases may mimic IBD (the cases of Familial Mediterranean Fever disguised as IBD may be one striking example in all). 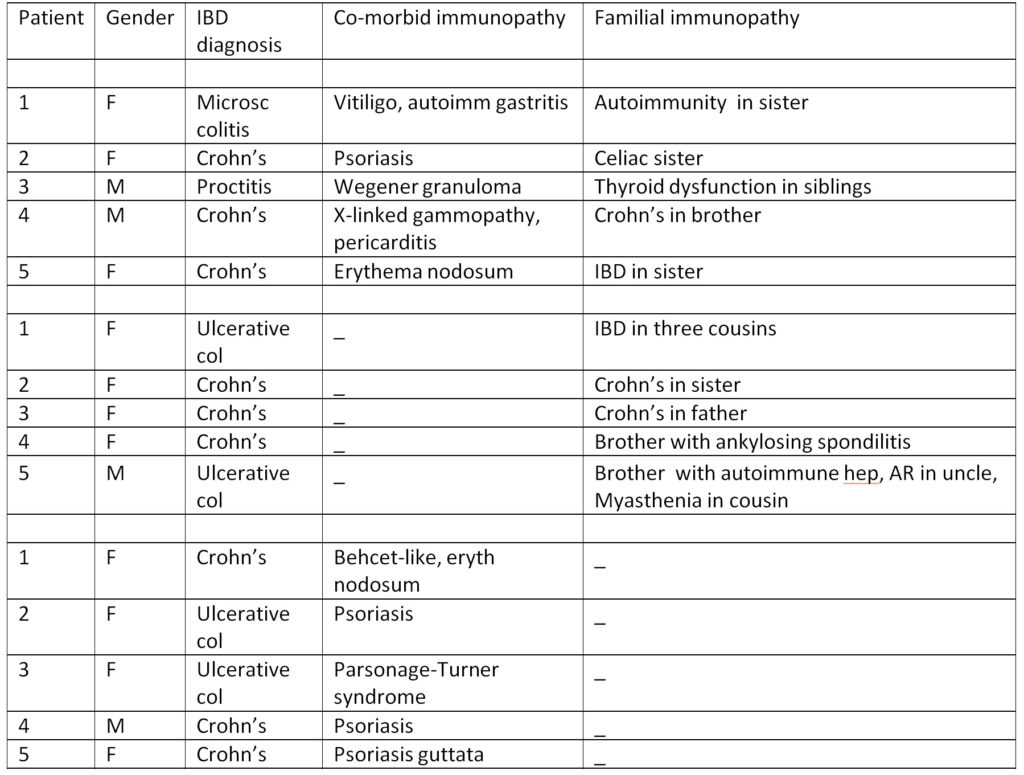 Asking whether such observations belong exclusively to academic medicine, we analyzed the patients attending our practice office. In this real-life environment, we did find that 15:27 IBD patients (55%) exhibited immune-inflammatory phenomena with psoriasis ranking first in the list. Familial involvement was present in 10 of the 15 (Fig. 1). These findings should nowadays be read as an encouragement to be more conducive in guessing the underlying pathologies of a given IBD case, while doctors’ multidisciplinary mindset on one hand, and disease contextualization on the other hand, should become the pass-words to serve future patients in the best personalized fashion.