Inflammatory differences between men and women uncovered by 27-hydroxycholesterol

The combination of reduced exercise and increased caloric intake has led to a global obesity epidemic. Besides being characterized by increased waist circumferences and BMI, many obese patients also suffer from a chronic, low-grade inflammatory response, which is also termed ‘metabolic inflammation’. This metabolic inflammation is known as a cause for a multitude of disorders such as cardiovascular disease, non-alcoholic fatty liver disease and type 2 diabetes (among others). 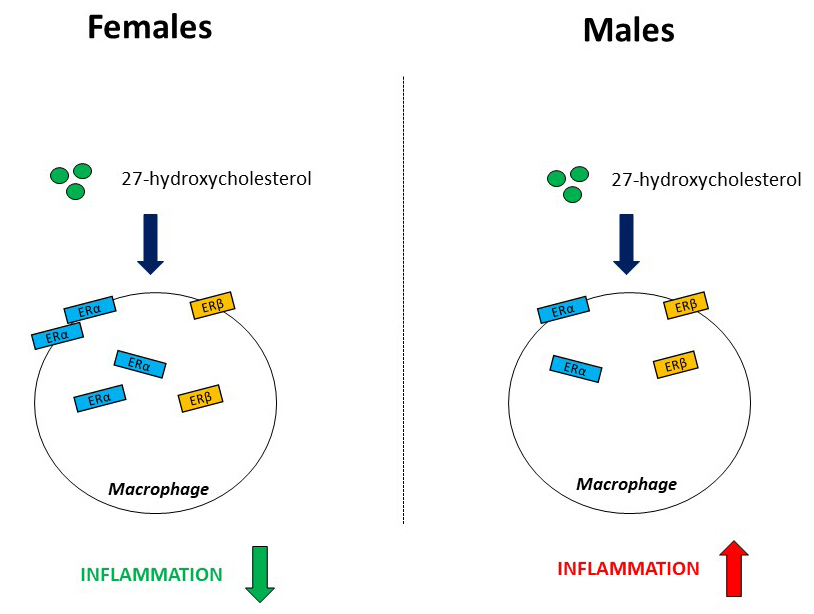 One of those underlying processes responsible for the metabolic inflammatory response, are disturbances in cholesterol metabolism in macrophages, which are immune cells that are chronically activated and hence, contribute to a constant production of inflammatory cytokines. As such, identifying interventions for improving cholesterol metabolism in macrophages has been an attractive approach to reduce inflammation. However, an increasing amount of evidence has pointed towards sex differences influencing physiological processes, including inflammatory responses. In spite of these physiological differences between men and women, only limited research has focused on the biological factors underlying these differences.

Cholesterol-derived lipids known as oxysterols have been linked to obesity-associated inflammatory conditions. The most abundant oxysterol in the human body is 27-hydroxycholesterol (27HC) , which is generated via enzymatic oxidation of cholesterol by sterol 27-hydroxylase (CYP27A1) . Due to its cholesterol-expelling effects, 27HC has been investigated as a therapeutic agent in atherosclerosis and non-alcoholic steatohepatitis (NASH), pathologies characterized by cholesterol-induced macrophage activation leading to inflammation. Relevantly, whereas hematopoietic overexpression of Cyp27a1 and subcutaneous administration of 27HC in female hyperlipidemic mice resulted in reduced hepatic inflammation, subcutaneous injections of 27HC in a comparable male hyperlipidemic mouse model paradoxically elevated atherosclerosis via increasing pro-inflammatory processes. These results suggested that sex differences may underlie the opposite effects of 27HC on cholesterol-induced inflammation.

Altogether, these data demonstrate for the first time the sex-opposed effects of 27HC on inflammation. Hence, the individual’s sex needs to be taken into account when 27HC is employed as therapeutic tool and gender-based prevention and therapy should be further considered and investigated in the future.