Schizophrenia-spectrum disorders (SSD), including schizophrenia and other psychosis related conditions, affect about 3.5% of the population worldwide. Although there are quantitative differences, similar clinical and cognitive characteristics can be present across all the diagnoses of the spectrum. These symptoms can be mainly grouped in three dimensions: i) positive dimension, which includes symptoms such as hallucinations (false sensorial perceptions); ii) negative dimension, which includes symptoms such as anhedonia (inability to experience pleasure); and iii) cognitive deficits, which include executive dysfunctions (abilities to represent, plan, execute and evaluate an action), among others.

Epidemiological studies have demonstrated that SSD have a strong genetic component: it is estimated that around 80% of SSD etiology can be attributed to the effect of a large number of genes. More particularly, it has been reported that several of the genes associated with SSD are involved in essential processes related to the brain development and functioning, such as the glutamatergic neurotransmission. Therefore, genetic variants might lead to deviances in brain structure and functioning, which in turn can underlie psychiatric disorders. 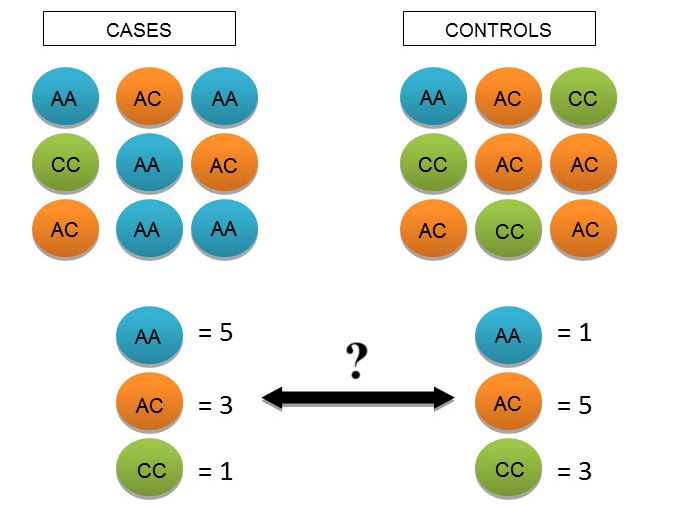 Fig. 1. Case-Control study design. A comparison between the frequency of one genetic variants (or allele) in patients (cases) and controls is performed in order to find genes involved in the disorder. In the figure an example of one SNP with two possible alleles (A and C) is shown. Each circle represents one individual carrying one of the three possible combinations of alleles (genotypes) for that SNP: AA, AC or CC. Statistically significant differences between frequencies in patients and controls are interpreted as that SNP/gene is involved in the risk for the disorder.

Genetic variants refer to subtle changes in the DNA sequence. DNA is composed by 4 different types of nucleotides (Adenine (A), Timine (T), Guanine (G) and Citosine (C)), and although people share the 99% of DNA sequence, there are specific positions where people can differ and have different nucleotides. These variants affecting one nucleotide are called Single Nucleotide Polymorphisms (SNPs). As diploid organisms, humans have two copies of each gene, one inherited from each parent. The combination of the two variants that we receive from our parents in one position is named genotype. For example, we will say that one individual carries the genotype AA if he receives the allele A from both parents, or the genotype AC if he receives a different allele from each progenitor. Therefore, it can be studied whether there are differences in nucleotides/genotypes frequencies between patients with SSD and healthy subjects (case-control study). If so, it can be concluded that one specific SNP is associated with SSD (Fig. 1).

We have studied two genes that play a role in regulating glutamatergic neurotransmission and that have been previously associated with SSD: the D-amino Acid Oxidase Activator gene (DAOA) and the Regulator of G-protein signalling 4 gene (RGS4). 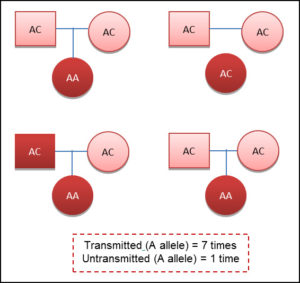 In our case, instead of using a case-control design, we used a family-based method, which is called transmission disequilibrium test (TDT). The TDT studies whether a certain allele is transmitted from parents to affected offspring more often than would be expected by chance (50%), which would imply that the allele/SNP is associated with the disorder (Fig. 2). We examined the association between eleven SNPs in DAOA and RGS4 with the risk to develop SSD in 222 families (including 222 patients with SSD and 531 healthy first-degree relatives). In a second part of the study, we examined whether the SNPs in these two genes explained the differences in cognitive performance within patients.

Trying to make a long story short, we found that one haplotype in DAOA, which can be easily understood as a group of consecutive SNPs (in this case 6 SNPs), was significantly under-transmitted to patients. Therefore, this suggests that this haplotype is associated with a protective effect with the psychotic disorder continuum, which is in line with previous studies.

Regarding the cognitive performance, another haplotype in DAOA (6 SNPs) was associated with worse scores in executive performance in SZ patients. Although this result was not significant after a robust statistic correction, it cannot be dismissed completely, since it is consistent with previous studies.

In all, our findings suggest that the DAOA gene may contribute to the risk for psychotic disorders and that this gene may play a role as a modulator of executive function, probably through the dysregulation of the glutamatergic signaling.