Infrared does more good than bad for the skin: how can we learn from the sun

In the last decade, it has been proposed that the sun’s Infrared (IR) wavelengths might be damaging human skin and that sunscreens, in addition to their desired effect to protect against Ultraviolet (UV), should also protect against IR (and perhaps even visible light). Yet, little has been said about the other side of the coin. This article will focus on key information suggesting that IR may be more beneficial than harmful when the skin is exposed to the appropriate intensity/dose of IR radiation similar to daily sun exposure received by people in real life.

Although the consequences of sun exposure on the skin have been extensively studied over the years, the impact of IR radiation has received far less attention than its UV counterpart that is well known to cause skin cancer, aging, and immune suppression.

Moreover, the solar IR-A (also called NIR) intensity level is critical to trigger beneficial effects in the skin beyond which it becomes harmful. Most studies reporting the damaging effects of IR used artificial light sources way above the solar IR intensity threshold.

Photobiomodulation (PBM) exposure to visible and IR-A light which emulates the conditions of natural sunlight in wavelength, intensity, and dosage can be beneficial to the skin. Such light exposure might even pre-condition the skin, preparing it for upcoming (mid-day zenithal) UV insults. Such application, called photoprevention employs visible and, for the most part, IR-A radiation to better prepare the skin for upcoming insults like UV induced sunburn emulating processes found in nature. This is understandable from an evolutionary standpoint since exposure to these early morning red and IR-A wavelengths in sunlight may ready the skin for the coming mid-day deleterious UV. Furthermore, the ratio of UV to IR-A, as measured in the tropics, is lower in the morning and at the end of the day (Fig. 2). Cooler morning temperatures combined with the proportionally lower UV/IR-A ratio provide the ideal conditions to trigger IR-A beneficial effects without temperature increase in the skin before potential UV insults. The same applies late in the afternoon with PBM tissue repair, if UV damage occurs. Consequently, IR-A prevents and restores the possible mid-day UVR damage to the skin within beneficial physiological intensity boundaries. 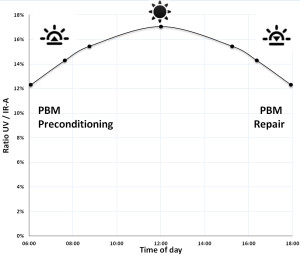 Fig. 2. Ratio of UVR / IR-A solar intensities, at sea level, with no clouds overhead, as available in the inter-tropics zone (where zenithal sun happens).

On the other hand, exposure to artificial IR-A radiation of too broad of a range and intensity/dose can contribute to existing detrimental effects or cause negative effects of its own (increased collagenase). Several studies demonstrate the damaging effects of IR-A radiation in the skin both in vitro and in vivo. However, they use high-intensity artificial IR-A light sources that do not reproduce real life daily sun exposure. The IR-A emitted by the sun and reaching the skin is not of such high intensity. Some investigators even suggest the development of sunscreens protecting against IR-A. Such claims are irrelevant for consumers and medical professionals because the assessment of IR-A-induced damage evidenced at a physiologically realistic intensity is a pre-requisite. Yet, it has been shown that at realistic intensities/doses, IR-A radiation has beneficial effects on collagen metabolism and upcoming UVR damage.  Similar to PBM parameters, daily IR-A sun exposure delivers a much lower intensity and total dose than powerful artificial sources (760-1450 nm).

To our knowledge we are the first to describe that IR does more good than bad for the skin by learning from the sun, particularly IR solar intensity during the day.

One could therefore assume that early morning “sun salutation” (surya namaskar) and late afternoon procrastination on the beach are actually natural PBM treatments to prevent and repair, respectively. Consequently, if your shadow is taller than you are (in the early morning and late afternoon) you’re taking advantage of the beneficial effects of IR-A while avoiding peak (Zenithal) harmful UV. Ultimately, it is another way of being sun smart.