Inhibition of bovine insulin amyloid fibrillation and toxicity by silibinin

The misfolding and subsequent aggregation into β-sheet rich assemblies of endogenous polypeptides, such as β-amyloid peptide, tau protein, α-synuclein, and insulin are the underlying causes of diabetes and many neurodegenerative diseases. Although, no sequence or structural similarity between the amyloid precursor peptides and proteins has been found, amyloid fibrils share some common features including β-sheet rich structure and ability to bind Thioflavin T and Congo red dyes. This may lead to the suggestion that different peptides and proteins follow similar fibril formation pathways. Bovine insulin is one of the best-characterized proteins showing a significant structural homology with human insulin (they differ by only three amino acids), which has been associated with the injection-localized amyloidosis. 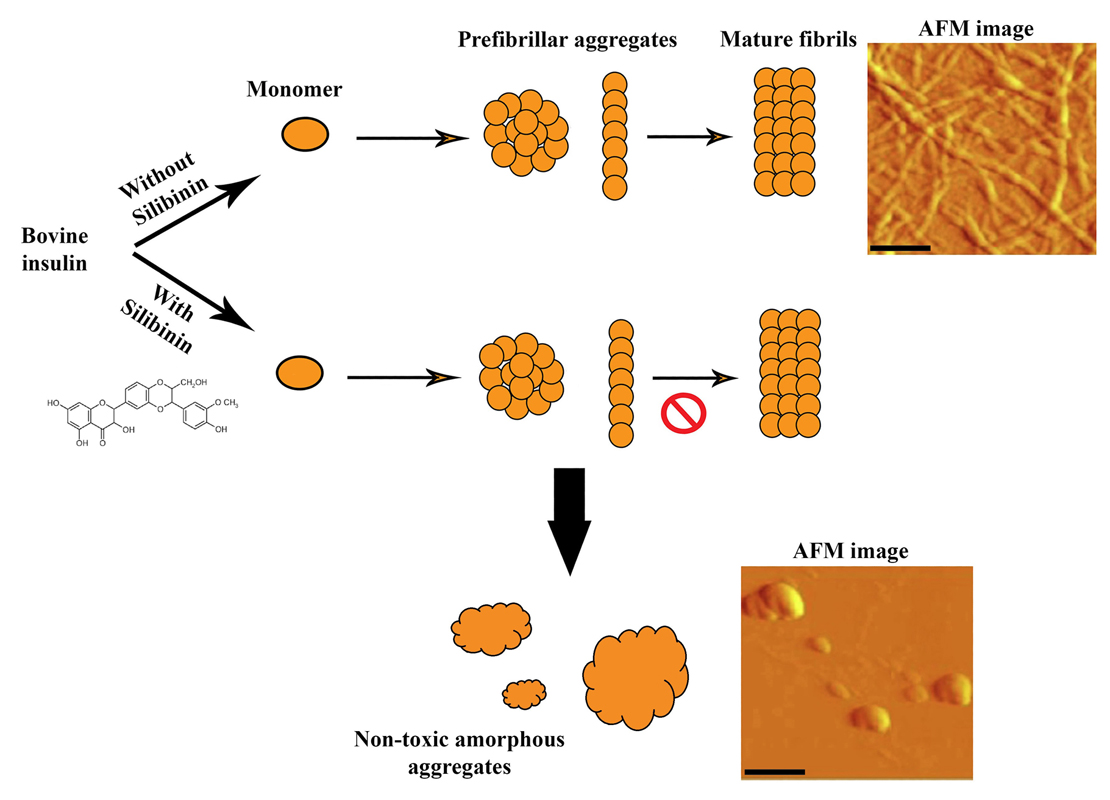 Thus, bovine insulin serves as an excellent model protein to study the mechanism of amyloid fibril formation in vitro. Due to the absence of an effective treatment for amyloid-related diseases, searching for compounds that can effectively inhibit formation of amyloid fibrils may be a promising therapeutic strategy. In this regard, natural polyphenols, which are found extensively in foods and herbal remedies, have been reported to prevent and/or retard amyloid fibrils and to attenuate their related cytotoxicity both in vitro and in vivo. Among them, silibinin (silybin) has attracted prominent attention due to its ability to interact with a variety of amyloid forming peptides and proteins including amyloid beta, human islet amyloid polypeptide, and hen lysozyme thus effective in prevention of amyloid fibril formation. However, the mechanism of its inhibition of the amyloid fibril-induced neuronal cell death not clearly understood. In the present study, the potency of silibinin to interact with and inhibit amyloid fibrillation of bovine insulin was investigated by a range of techniques specific for amyloid detection. Based on the obtained results, we suggest that the binding of silibinin to the amyloidogenic structures formed during the early stages of bovine insulin fibrillation significantly modifies the surface structural features of prefibrillar species and redirects insulin aggregation process toward an alternative non-toxic disordered (amorphous) aggregation pathway (Fig. 1). Furthermore, cytoprotective effects of silibinin against toxicity induced by bovine insulin amyloid fibrils on the neuroblastoma SH-SY5Y cells were also evaluated. Based on results obtained by lactate dehydrogenase (LDH) release assay, reactive oxygen species (ROS) content measurement, and propidium iodide (PI) staining, we suggest that cellular membrane permeabilization and mitochondrial dysfunction may be the mechanism by which bovine insulin amyloid fibrils exert their cytotoxicity (Fig. 2A). Accordingly, we propose that bovine insulin amyloid fibrils induce both necrotic (plasma membrane disruption evidenced by LDH release) and apoptotic (detected by PI staining) changes of SH-SY5Y cell (Fig. 2A).

Fig. 2. Protective effects of silibinin against cytotoxicity (A) and MDH release (B) induced by bovine insulin aggregates.

Finally, interaction of bovine insulin fibrillation products (including oligomer, and fibril), aged in the absence or presence of silibinin, with rat brain mitochondria was investigated following an approach involving the release of mitochondrial malate dehydrogenase (MDH). Release of mitochondrial MDH upon exposure to bovine insulin fibrillation products (Fig. 2B) demonstrates that these aggregates could affect membrane permeability. On the other hand, silibinin was very effective in attenuating mitochondria membrane damage (Fig. 2B). Together, results demonstrate the capacity of bovine insulin fibrils to cause SH-SY5Y cell death by inducing necrosis/apoptosis changes and suggest how silibinin may afford protection. It is concluded that elucidation of such protection may provide important insights into the development of preventive and therapeutic agents for amyloid-related diseases.