The highly acidic gastric juice is an efficient killer of swallowed microorganisms. This is an important function which is reflected in the tight regulation of gastric acidity involving both nerves and hormones (blood born messengers).
The most important regulator of gastric acidity is the hormone gastrin, which is produced in the mucous membrane of the outlet of the stomach and released when gastric acidity is reduced
Gastrin is transported from the lower part of the stomach, via the blood to the upper part where it stimulates the so called ECL cell to both release the messenger histamine and to start dividing. Histamine in its turn stimulates the acid producing parietal cell to increase secretion of acid. This mechanism is sufficient to maintain acceptable gastric acid concentration even during meals.
Drugs inhibiting acid secretion are used in the treatment of acid related diseases, particularly reflux disease where gastric juice regurgitates to the gullet where it irritates the mucous membrane causing pain.
The inhibition of gastric acid secretion results in reduced gastric acidity which is registered by the gastrin producing G cells, inducing increased release of gastrin which stimulates the ECL cell. 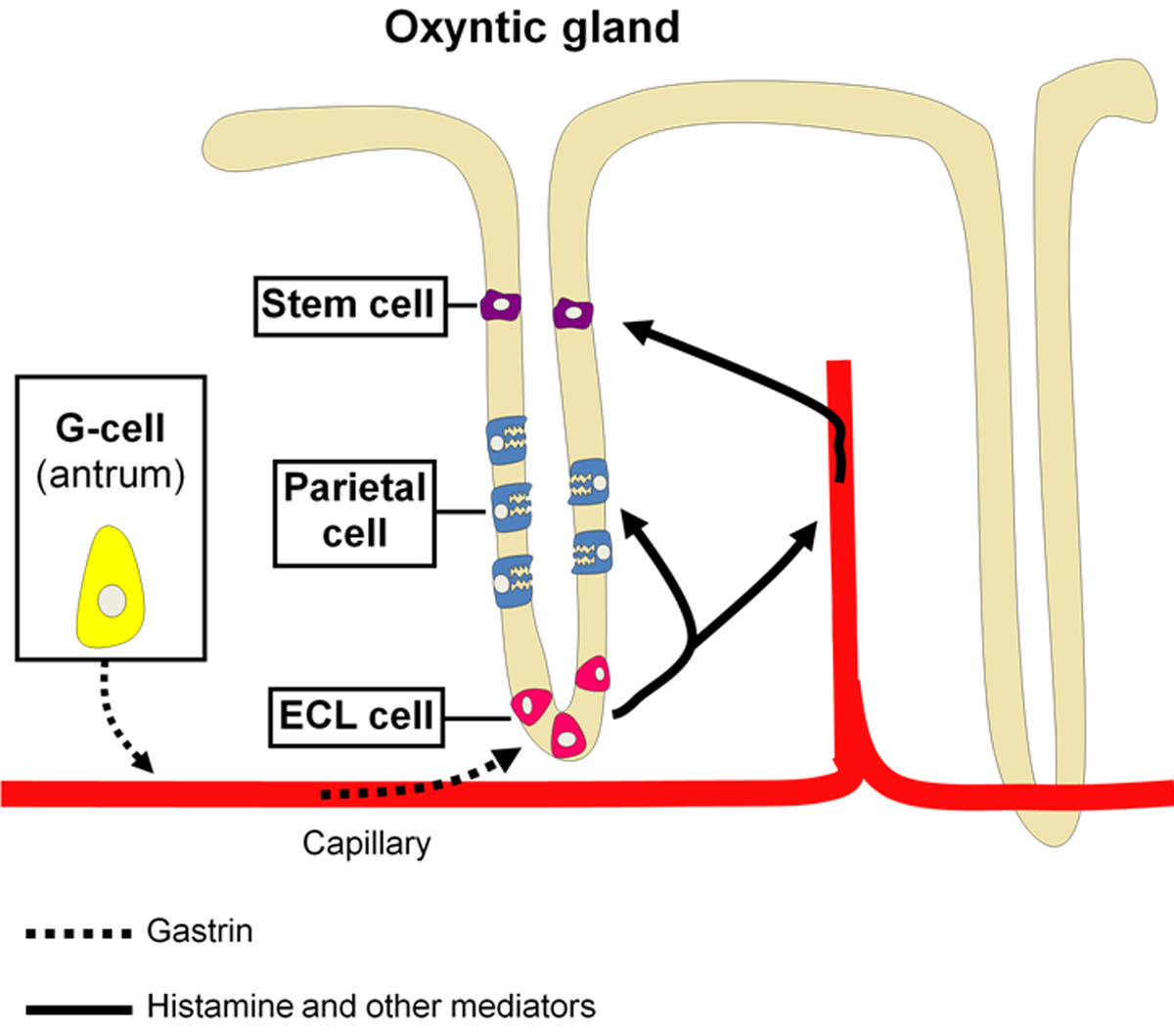 Fig. 1. The G-cell detects the acidity of the gastric content and adjusts the release of gastrin in order to keep sufficient acidity to maintain the gastric juice an efficient killer of swallowed microorganisms. Gastrin is transported via the blood to the upper part of the stomach where the histamine producing ECL cell and the acid producing parietal cell are located. Gastrin stimulates the ECL to release histamine and to divide. Histamine in turns stimulates the parietal cell to produce acid. Inhibitors of acid secretion induce reduced gastric acidity which make the G cell to release more gastrin and thus continuously stimulation the ECL cell proliferation which in long-term may provoke tumors from the ECL cell.

The effect on the ECL cell of this increased gastrin concentration depends of the degree and duration of reduced gastric acidity. The first consequence of increased division of the ECL ell is an augmentation in ECL cell density (hyperplasia) which results in an increased capacity to release histamine.
When stopping treatment with the inhibitor of acid secretion, the local increase in histamine l leads to an increased acid secretion compared to before treatment. This effect is called rebound acid hypersecretion and may possibly induce new symptoms from the gullet.

Long-term overstimulation of division of the ECL cell increases the risk of mutation and thereby tumour development. At first, rather benign tumors develop which disappear when stopping the treatment with normalization of gastrin levels, but with continuous overstimulation for years, tumors become increasingly more malignant.

It has become evident that the ECL cell plays a more important role in the development of stomach cancers. Therefore, long-term treatment with efficient inhibitors of acid secretion may be expected to increase the risk of gastric cancer.