Inhibitors of intracellular enzymes for treatment of multiple sclerosis

Lymphocytes are white blood cells that are central in the immune response to foreign microorganisms. Like all cells, lymphocytes have a membrane, a lipid bilayer, that envelops the content of the cell. Proteins attached to the cell membrane interact with molecules outside the cell, like free hormones or growth factors, or with molecules on the surface of other cells. In many cases, these interactions lead to signals that are transferred to the interior of the cell and result in biological effects.

Individual lymphocytes have specific receptors located in the cell membrane, which recognize parts of microorganisms called antigens. Upon encounter of an antigen, the lymphocyte receives a signal and becomes stimulated. The stimulation leads to cellular activities, like cell-division and production of inflammatory molecules, aiming at eliminating the foreign intruder. 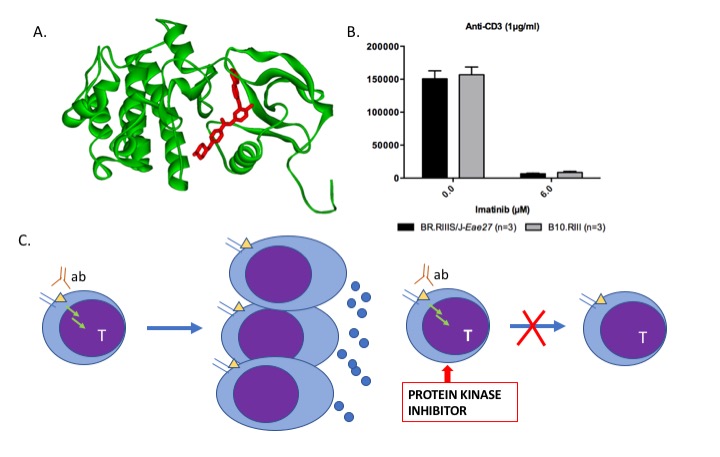 Fig. 1. The protein kinase inhibitor imatinib (red) binds to a protein kinase (green) (A); By activating cultured T-lymphocytes (T) with an antibody (ab) to the T-cell receptor-associated molecule CD3 (yellow triangle), the cells start to enlarge, divide and produce molecules important for inflammation (blue dots). By adding imatinib to the cells, the activation of the cells is inhibited (B and C). In Figure 1B, the y-axis shows how much the cells divide (Jacobsen, FA et al).

How is the recognition of an antigen at the cell surface transformed into a change in the activity status of the cell? From the membrane receptor, facing the outside of the cells, to the inner of the cell, where the outcome of the cellular activation is decided, a signal is transferred by adding a phosphate group to signaling proteins. The phosphorylation is conducted by enzymes called protein kinases.

Experimental Autoimmune Encephalomyelitis (EAE) is an animal model for Multiple Sclerosis (MS). In MS, an aberrant inflammatory response, directed to “self-tissue” instead of microorganisms, is elicited by lymphocytes. This results in infiltration of immune cells into the central nervous system (CNS) and subsequent inflammation. In the inflammatory process, nerve cells and their protective lipoprotein layer, the myelin sheet, are destroyed and eventually this leads to impaired neurological function and disabling symptoms.

Based on our previous search for genes controlling EAE and MS, we investigated the protein kinase ABL2 for being a candidate gene in EAE. The study is presented in the article by Jacobsen FA et al, in Journal of Neuroimmune Pharmacology. The ABL2 kinase takes part in the intracellular signaling, which occurs upon lymphocyte receptor binding. The result of signal transduction through ABL2 is re-organization of the cells’ internal skeleton, development of cellular shape, cell movement, and adhesion of one cell to another cell. In the article we show that genetic variation in the ABL2 gene influences the activation of lymphocytes and the development of EAE. ABL2 could therefore be one of the players involved in the process shaping a self-reactive immune-response that leads to severe effects in the CNS.

In order to investigate whether pharmacological inhibition of the ABL2 kinase would have an attenuating effect on EAE, we treated mice with imatinib mesylate (Novartis). Imatinib is a protein kinase inhibitor used for treatment of cancer of white blood cells, chronic myeloid leukemia (CML). The treatment lead to a significant inhibition of EAE-progression compared to control mice receiving only water.
In conclusion, the result suggests that a protein kinase inhibitor, commonly used for cancer therapy, could possibly be used for treatment of MS. Since patients treated with imatinib sometimes become resistant to the drug, novel tyrosine kinase inhibitors have been, and are being, developed. These inhibitors are potential novel drug candidates for treatment of MS and other chronic inflammatory diseases.