Work is central to a person’s life, impacting the physical, mental, financial and social health of individuals and communities. It is a powerful determinant of health. For survivors of traumatic brain injury (TBI), however, the process of re-entering the workforce after the injury can be particularly challenging and their post-injury life is often characterized by unemployment, poverty, poorer health and increased health care costs. In fact, research demonstrates that, on average, only 40% of individuals return to work following a moderate to severe brain injury and that even a mild injury or concussion (mTBI) can have long-term consequences due to ongoing symptoms, posing difficulties for returning to work. These symptoms are usually not specific to TBI and while the list of post-concussive symptoms is long, insomnia has been recognized as extremely important for explaining many of them in the general population, including cognitive disturbances, dizziness, fatigue, excessive sleepiness, depression, and pain. 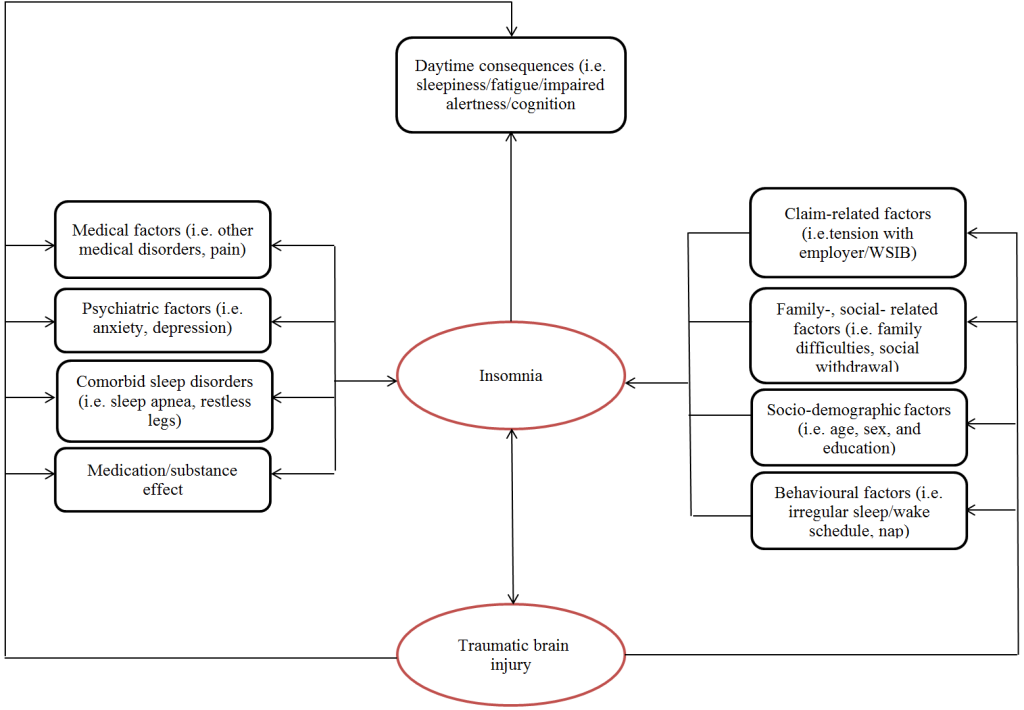 Insomnia is the complaint of inadequate sleep despite adequate opportunity, and can be classified according to the nature of the sleep disruption (i.e. difficulty falling asleep, maintaining sleep, waking up too early, or not feeling refreshed upon awakening) and duration of the symptoms. In the past two decades, researchers have studied the relationship between insomnia and other factors, with coincident conclusions that insomnia is a complex entity, in which a range of medical, psychiatric, and primary sleep disorder symptoms are superimposed on socio-demographic and behavioral factors. Given the complexity of insomnia, Tatyana Mollayeva (University of Toronto) and colleagues have developed a construct of insomnia for patients with TBI, to be investigated in their sample of 94 middle-age workers with delayed recovery from mTBI (Fig. 1).

Dr. Mollayeva and colleagues found that nearly 69% of workers with delayed recovery from mTBI expressed clinical insomnia. Workers who were older, had bodily pain, were diagnosed with depression/anxiety, were taking tricyclic antidepressants at the time of assessment, demonstrated instability in bedtime or wake-up times, had significantly higher insomnia scores. Furthermore, researchers found that the presence of previous head trauma was strongly associated with lower insomnia severity in the bivariate analysis, as well as in the final regression models that were adjusted for age and sex.

The limitations of the study are that researchers assessed workers at different, single time points, after their injury, and therefore the longitudinal interplay between factors in predicting insomnia after work-related injury remains to be determined. Their sample was also neither nationally representative nor representative of the entire mTBI population, as the researchers focused only on workers with mTBI and prolonged recovery.

The authors state that “insomnia is highly prevalent in persons with delayed recovery from mTBI or concussion. Our findings show that factors associated with insomnia in this population are clinical and non-clinical in nature, which emphasizes the need for multi-disciplinary assessment and interventions. This study draws attention to the need for inclusion of sleep investigation in the agenda of health care providers for patients with mTBI at the early stages post injury.”