Normally, blood glucose levels are controlled within a reasonable range by the release of insulin from pancreatic beta cells in response to an increase in blood glucose levels following a meal or other glucose challenge. One of the salient features of late stage type 1 (T1D) and in developing type 2 (T2D) diabetes is insulin resistance, a state in which target cells fail to respond to ordinary levels of insulin. This results in the need for increased secretion of insulin to attempt to control blood glucose levels. Thus, there is a cycle of hyperglycemia and hyperinsulinemia which eventually leads to pancreatic β cell deterioration and death (apoptosis – Fig 1).

This loss of pancreatic β-cells is a major contributing factor to decreased pancreatic function in both T1D and T2D. The dynamic changes in insulin levels during progression of diabetes raise certain questions regarding potential regulatory effects of insulin in the pancreas on β cells. In general, insulin acts as a growth factor that plays a role to protect cells from apoptosis, and insulin therapy can protect β cells from deterioration. However, it has been shown that hypersecretion of insulin may precede β cell dysfunction and may be an important factor in the progression to β cell failure. Studies indicate that treatment of cultured beta cells with insulin, or hyperinsulinemia induced in animal models, may promote the generation of reactive oxygen species (ROS) or superoxide radicals. The low level of anti-oxidant enzymes in pancreatic β cells renders them relatively more sensitive to oxidative stress than other cell types. Indeed, ROS, in turn, can increase oxidative stress and death in pancreatic beta cells. In this study, we investigated the possible pro-apoptotic and death-promoting effects of insulin on pancreatic β cells, utilizing pancreatic β cell lines as well as isolated mouse and human pancreatic islets. 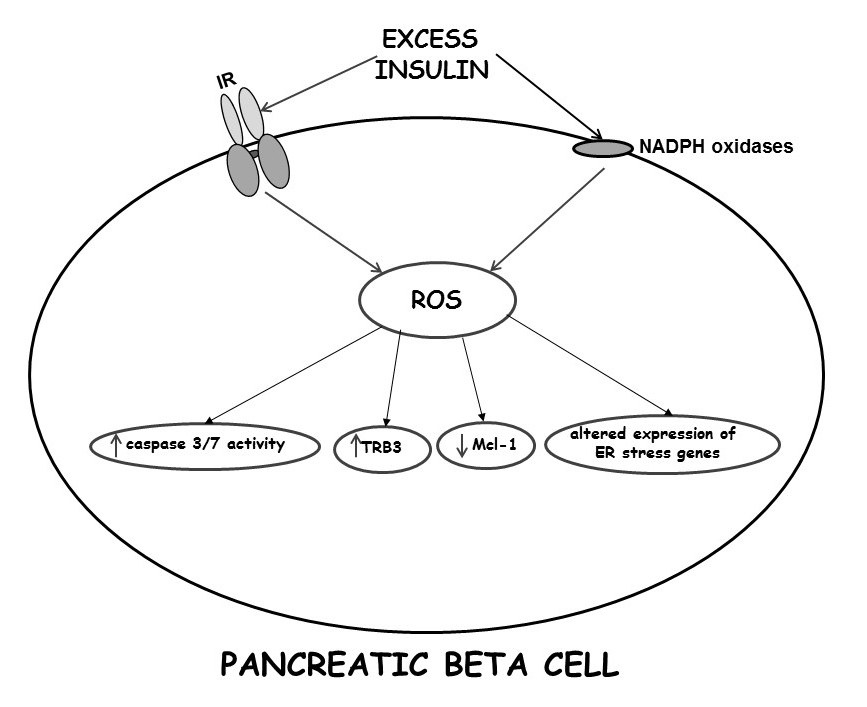 Thus, the picture that emerges is following (summarized in Figure 2): Increased and sustained insulin levels (such as occurs in insulin resistant states), perhaps interacting with other factors such as cytokines or high glucose concentrations, promote ROS production, either via insulin receptor or via the NOX family of NADPH oxidases, known to be expressed in pancreatic beta cells. This increased ROS may alter expression or activity of elements detrimental to pancreatic beta cell survival and, thereby, activate or sensitize mechanisms to promote cell death.