Over the past decade, nanomaterials gained significant interest in medical and biomedical research due to their unique properties such as optical, magnetic, electronic and mechanical. These unusual properties make them particularly attractive for their investigation in biomedical applications including medical imaging, drug delivery and tissue engineering. However, due to their potential risk on living systems, their behavior in biological systems should be clearly understood before their use in medical related applications.

Boron nitride nanotubes (BNNTs), known as analogs of CNTs, are composed of boron and nitrogen atoms. Their synthesis was reported for the first time in 1995 by Chopra et al.. They have received high attention for their use in several research fields including medicine due to their properties including high oxidation, mechanical resistance, and chemical stability. Among the several proposed bio-applications; gene therapy, drug delivery, tissue engineering, and medical imaging can be mentioned. It is therefore clear that investigating their possible adverse effects on living systems is considered as an important issue before their any realistic clinical applications.

The high chemical stability and hydrophobicity result in their poor dispersibility in aqueous media, which hinders their cellular uptake studies, and reliable assessment of their adverse effects on living systems. Therefore, we chemically modified BNNTs through hydroxylation (h-BNNTs), and consequent functionalization with carbohydrates (m-BNNTs) to increase their dispersibility in aqueous media, thus achieving optimal BNNT dispersions suitable for cellular uptake and biocompatibility investigations. In addition, we aimed to understand the surface chemistry influence on their toxicity. 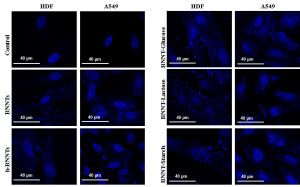 Our results indicate that the unmodified BNNTs, h-BNNTs and m-BNNTs, had no negative effects on viability of human dermal fibroblasts (HDFs), whereas BNNTs and h-BNNTs were highly cytotoxic on A549 cells at high concentrations. The BNNTs and h-BNNTs showed genotoxic effects at higher concentrations as well as increasing oxidative stress in A549 cells. The difference in the toxicity results of the BNNT derivatives on HDFs and A549 cells can be attributed to the higher cellular uptake capacity of the cancer cells as compared to the healthy cells (HDFs are healthy cells and A549 are cancerous cells). Moreover, the hydrophobic nature of BNNTs is a cause of their toxic effects on these cell lines at higher doses suggesting that the carbohydrate modification prevents BNNT toxicity even at extreme doses.

In conclusion, our study suggests that BNNTs, h-BNNTs, but especially m-BNNTs, can be safely used as nanovectors for cell therapy, as drug delivery agents, and for other biomedical applications without significant damages to healthy cells. Due to their cytotoxic effects on cancer cells at higher concentrations (especially BNNTs and h-BNNTs), they could moreover be exploited to develop effective nanovectors for cancer treatment in combination with other traditional therapeutic approaches.